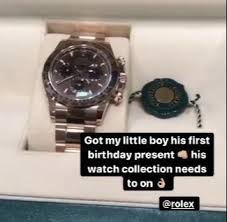 On Snapchat, Khan shared another picture of the watch and added that he had picked up the luxury accessory from Birmingham. He explained that he purchased the watch for Muhammad as he wouldn’t be able to celebrate his youngest son’s birthday due to COVID-19 this year. Muhammed will turn a year old on February 22, 2021, which is likely when he will receive the present.

Fans on social media were left rather perplexed as to why the boxer purchased an item for his youngest son, which couldn’t even be used. One wrote, “I think that watch may not even fit around Muhammad’s head. Why buy a toddler a gift he can’t use?” while another added, “Waste of money, that. Maybe Amir is teaching his kid how to read time from a young age.” However, this isn’t the first time that Khan has splashed the cash on a luxury watch. Only last year, he bought himself a £100,000 Richard Mille RM 032 dive watch.

According to reports from Celebrity Net Worth, Amir Khan’s net worth is an estimated £22.5m. The English boxer’s career earnings have been boosted through his boxing career. Khan’s boxing record stands at an impressive 34 wins in 39 bouts with 21 of them coming through KO’s.

Khan married Faryal Makhdoom in 2013. The couple has two daughters and a son. In August 2017, Amir announced that he and Faryal had agreed to split but the two reconciled later that year.

ALSO READ: Mike Tyson Admits He ‘Used To Rob’ Kids Like His 12-year-old Daughter When He Was Young

Disclaimer: The above information is sourced from various websites/ media reports. The website does not guarantee a 100% accuracy of the figures.

Gaming News – Top 5 Best Xbox’s Gaming Monitors 2021: How to Pick the Right One

Luxury Watches – Green is the New Blue: 5 Green Rolex Watches You Will Love

Home Decor – 5 of the biggest luxury home sales in April

Sports Gambling - Which player has the early lead in the NBA's MVP race?