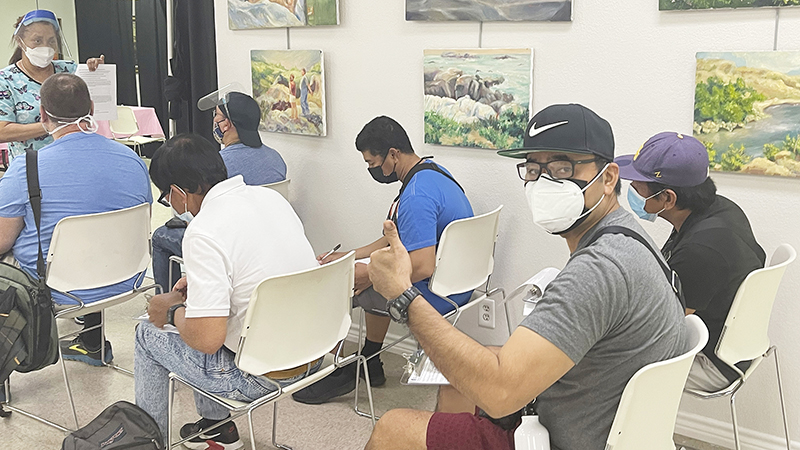 Ramil Bueno, a seafarer from the Philippines, flashes a thumbs up while waiting for a shot at the Port Arthur vaccination hub. (Monique Batson/The News)

It has become a common occurrence at the hub, as well as the mobile Strike Team, which began boarding ships to vaccinate seafarers in late May.

“They seem rather enthused when we give them the vaccine,” he said. “They’re taking pictures and sending them home. And that makes us feel better, that we were able to get them what they need. That’s our job. That’s our mission.”

Doreen Badeaux with the Port Arthur International Seafarers’ Center and the Apostleship of the Sea USA worked with the Strike Team in May to start the process of vaccinating seafarers, stressing the need for those that often couldn’t get vaccinated in their home countries.

“What we’re seeing is at some ports, people are trying to charge ships $800 per person to get vaccinated,” Badeaux told Port Arthur Newsmedia following the Strike Team’s first trip aboard a ship. “That’s another reason we’re trying to help these people.” 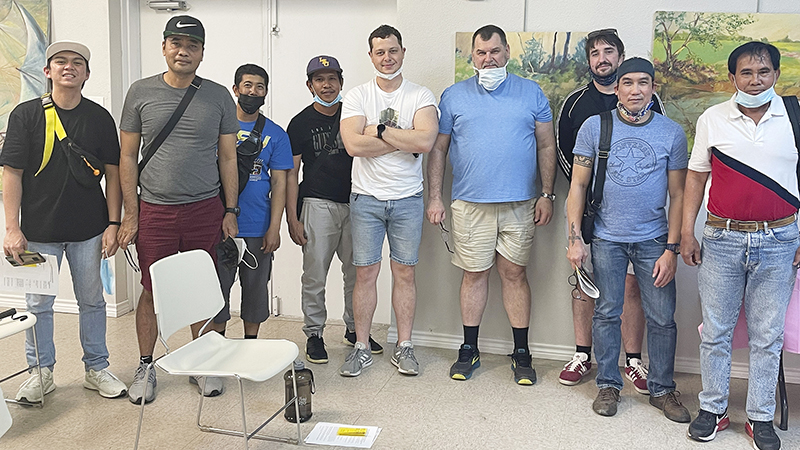 A group of seafarers were brought into the Port Arthur hub Friday for COVID vaccinations. (Monique Batson/The News)

The group that arrived Friday came from an assortment of different countries. As they patiently listened to information about the shot, potential side effects and other information; Ramil Bueno took photos of his registration form.

For Alexander Tihos, not feeling any pain during the shot was surprising.

“Guys told me (there is) a little bit of pain in the first minutes,” he said of his friends back in Latvia, a country in northern Europe. “I didn’t feel absolutely nothing.”

While he has access to the vaccine, Tihos said getting the shot in Port Arthur was better.

“It’s a good opportunity to get them while working on ship,” he said. “It’s more preferable because at home I have to stay in line waiting for all this formalities.”

The hub currently operates from the Texas Artists Museum, located at 3501 Cultural Center Dr., from 8:30 a.m. to 4 p.m. Monday through Friday.

Those wanting the Pfizer vaccine are encouraged to call 409-332-6215 ahead of time as the supply fluctuates.

Homebound residents in Port Arthur, Nederland, Groves and Port Neches are able to make an appointment with the mobile Strike Team by calling 409-332-6180.