At the time just 35 cases had been confirmed across the country.

The patient had no relevant travel to an affected area.

As a result investigations were undertaken to see if the patient had contracted it “directly or indirectly” from an individual who had recently travelled abroad.

Here, we take a look back at the Gazette and Echo front pages which documented the arrival of the virus in the county. 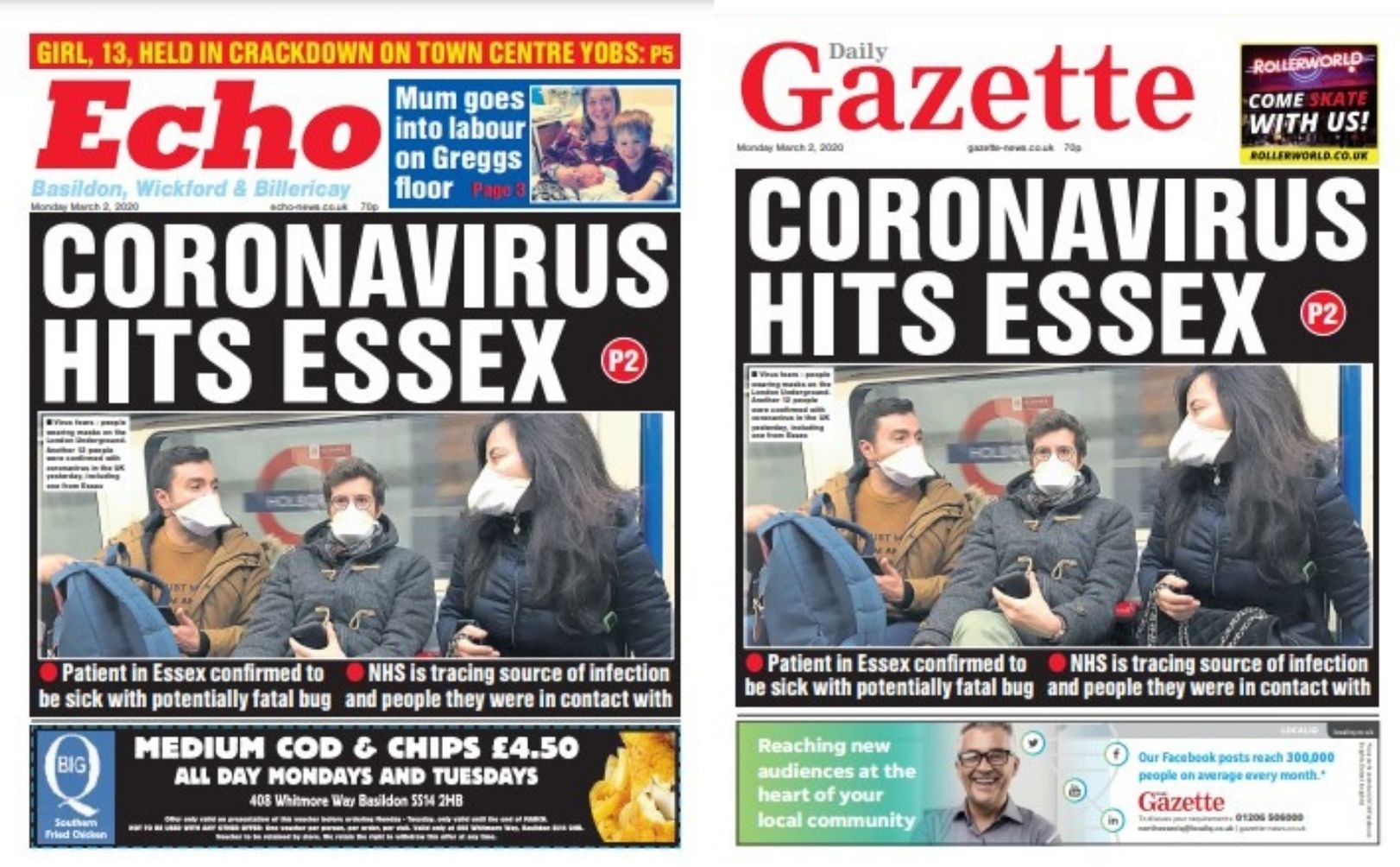 Monday’s front pages for the Echo and Gazette

The morning after it was confirmed that a person from Essex had tested positive for coronavirus these editions hit the shelves.

It was revealed health bosses were trying to track down the source after a person from Essex has tested positive for the coronavirus.

Colchester MP Will Quince said: “There is no need to panic as long as people follow what should be routine procedures, such as washing their hands regularly to stop you getting colds.”

Tuesday’s front pages for the Echo and Gazette

By Tuesday readers were opening papers which told how schools would remain open and how the Prime Minister had urged people to “go about their business”.

It was revealed the patient was identified at Princess Alexandra Hospital in Harlow and had since been transferred to a specialist hospital for treatment.

John Spence, Essex county councillor responsible for public health, said he was “confident” plans are in place to deal with “whatever comes next” in the county.

Other stories also featured prominently including a crash on the A12 and a woman attacked by thugs.

Wednesday’s front pages for the Echo and Gazette

By Wednesday the focus on coronavirus in the county had died down.

Our front pages covered stories about the sad loss of a para in Afghanistan and how a businessman stubbornly threw his high-end £10,000 Rolex watch onto a store roof to stop an armed thug robbing it from him.

Readers were told the coronavirus outbreak could lead to a fifth of workers being absent, cause the police to drop low-priority cases and force the NHS to delay non-urgent care, according to the Government’s battle plan.

The 27-page document sets out the UK-wide response to Covid-19 amid widespread concerns about the impact the virus will have on people’s wellbeing, the economy and public services.

Measures aimed at delaying the spread of the virus were said to include school closures, “reducing the number of large-scale gatherings” and encouraging greater home working. 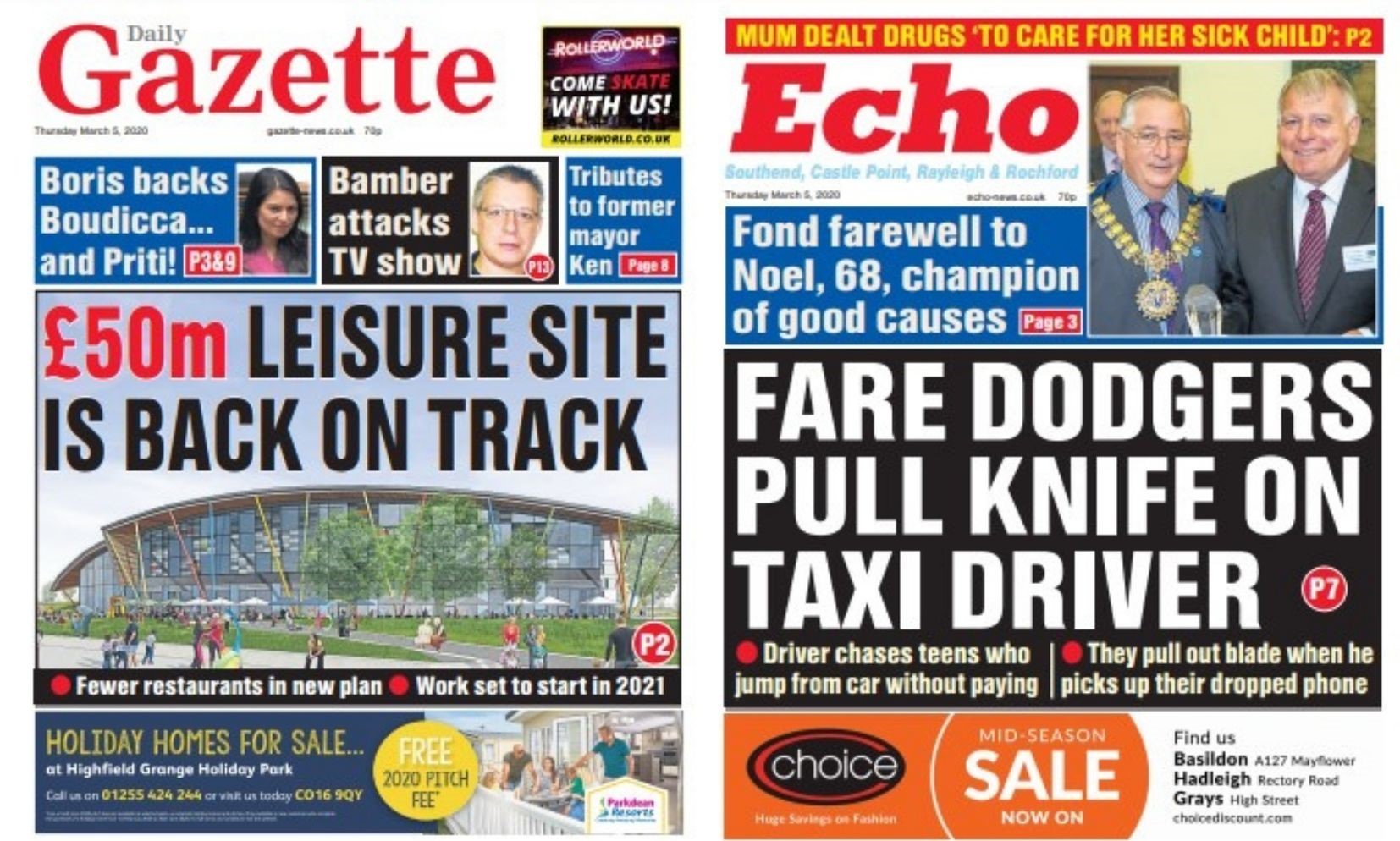 Thursday’s front pages for the Echo and Gazette

It was a similar story on Thursday with coronavirus featuring very little in any editions of our paper.

At this point the UK had seen its biggest day-on-day increase in coronavirus cases, with 85 people now confirmed to have the virus.

Three of the 29 new cases in England were passed on in the UK, which led to fears community transmission was taking hold.

Friday’s front pages for the Echo and Gazette

On the Friday Belfairs Academy confirmed parent of a child at the school had tested positive for the virus.

Parents received an email from the school which explained that the family were self-isolating but the school would remain open following advice from Public Health England.

In the five days since the first case was confirmed in Essex, case numbers had risen to six across the county.

Colchester Institute decided to cancel its catering students’ trip to Venice, Bologna, Florence and Rome after receiving updated advice from the Government.

Italy was at the time the worst affect country in Europe, with its northern region, of which Venice is the capital, particularly affected.

The Dengie Medical Partnership, which runs facilities in Tillingham and Maylandsea, announced it was set to suspend walk-in appointments from next week due to safety concerns sparked by coronavirus.

Before the end of March Essex would see lockdown begin and the first deaths across the county.