On Monday, shares of Biogen Inc. (BIIB, Financial) surged more than 40% on the announcement that the Food and Drug Administration approved the Cambridge, Massachusetts-based company’s Alzheimer’s drug aducanumab, giving Alzheimer’s patients a new method of treatment and the first such treatment over two decades.

The FDA said on its website that it approved the drug Aduhelm using the accelerated approval pathway, which “can be used for a drug for a serious or life-threatening illness that provides a meaningful therapeutic advantage over existing treatments.” The FDA added that Alzheimer’s is an irreversible, progressive brain disorder that slowly deteriorates memory and thinking skills and, eventually, the ability to carry out basic tasks.

Patrizia Cavazzoni, director of FDA’s Center for Drug Evaluation and Research, said that current therapies for the disease only treat symptoms of the disease and that Biogen’s new drug “is the first therapy to target and affect the underlying disease process of Alzheimer’s.” FDA said in the press release that researchers evaluated Aduhelm in double-blind, randomized studies in patients with Alzheimer’s. The study found that patients receiving the treatment had significant dose-and-time dependent reduction in amyloid beta plaque compared to patients receiving the placebo treatment. Based on the study, the drug received “fast track” designation, which seeks accelerated development and review of drugs that are intended to treat serious illnesses.

The approval of Aduhelm comes as the U.S. reports an average of 14,500 daily Covid-19 cases over the past week according to Johns Hopkins University statistics, numbers not seen since March 2020, the beginning of the pandemic.

Shares of Biogen surged to an intraday high of $468.55, up approximately 63.75% from last Friday’s close of $286.14. The stock is significantly overvalued based on Monday’s price-to-GF Value ratio of over 1.40.

GuruFocus ranks Biogen’s profitability 9 out of 10 on several positive investing signs, which include a 3.5-star business predictability rank and profit margins and returns outperforming over 88% of global competitors. 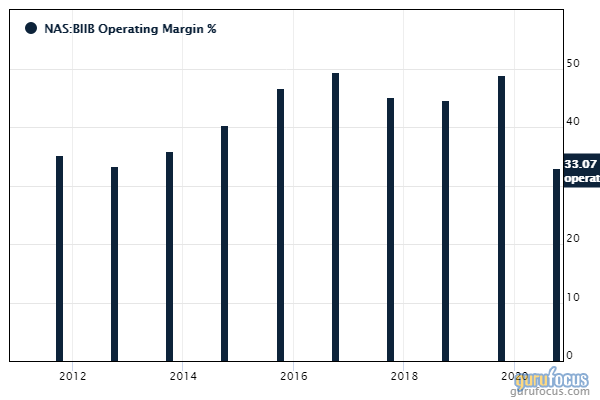