Beverage companies have known for decades that the endorsement of a popular athlete can boost sales and increase the value of the business. In 1991, basketball superstar Michael Jordan was paid $13.5 million (over 10 years) by Gatorade to be its sole celebrity spokesperson.

That was a lot of money back then. Now, it pales in comparison to the $60 million that LeBron James makes EVERY year in product endorsements, including his recently inked deal to hawk Mtn Dew Rise by PepsiCo (NSDQ: PEP).

But how much does it cost when a celebrity disendorses a product? Last week, The Coca-Cola Company (NYSE: KO) lost nearly $4 billion of market value after international soccer superstar Cristiano Ronaldo eschewed Coke in favor of water during a press conference on June 14.

Ronaldo has opined on the growing obesity problem in his home country of Brazil. He believes that soft drinks are partly to blame and is encouraging his fellow countrymen to drink water instead.

This episode illustrates the extent to which popular culture and the stock market have become intertwined. In this case, Ronaldo did not directly criticize Coca-Cola. All he did is remove two bottles of Coke from the podium in front of him and shout “Agua!” in Portuguese.

Apparently, that was enough to trigger a selloff in KO, which dropped 1% immediately after Ronaldo’s terse endorsement of water over soda. Presumably, the algorithms that trade on headline risk decided that was sufficient to merit selling the stock.

Since PepsiCo announced its new deal with LeBron on March 17, its share price has risen 12%. Over the same span, Coco-Cola is up 9%. Both companies have a market cap in excess of $200 billion, so every percentage point represents more than $2 billion of stock market value.

Prior to signing on with Pepsi, LeBron had been endorsing Coke for the previous 17 years. His change of allegiance is the latest volley in the so-called “Cola Wars” that have been raging between the two companies for more than 100 years.

I witnessed an event that exemplified how intense the rivalry is between Coke and Pepsi. I was in Atlanta 25 years ago to conduct a retirement planning seminar at Coca-Cola’s international headquarters.

That day, an employee had a pizza delivered for lunch from Pizza Hut. At that time, Pizza Hut was owned by PepsiCo. The offending employee was summarily fired on the spot.

Ever since that episode, I have viewed soft drink makers in a different light. It is a ruthless business with over $200 billion of annual sales up for grabs. That is a lot of money spent on what is essentially sugar water.

That may be why legendary investor Warren Buffett is Coca-Cola’s largest shareholder. His investment company, Berkshire Hathaway (BRK-A) owns 400 million shares of KO. That works out to 9.3% of the company’s common stock.

Ironically, Warren Buffett has counseled LeBron James over the years regarding big financial decisions. In an interview three years ago, Buffett said that James “has a money mind.”

Apparently, that mind decided it was time to ditch Coke for Pepsi. I would have liked to have been a fly on the wall when James broke that news to Buffett.

I don’t advise trying to guess which way the Cola Wars will turn next. The recent incidents involving Ronaldo and James illustrate how quickly the fortunes of either company can change overnight.

Instead, I suggest owning shares of the Invesco Dynamic Food & Beverage ETF (PBJ). The fund is up nearly 20% so far this year compared to a 14% rise in the SPDR S&P 500 ETF Trust (SPY). 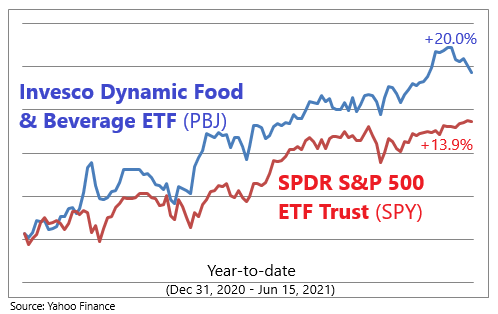 The economy is rapidly reopening as the threat posed by the coronavirus pandemic dissipates. People are going out to eat and drink again. It’s a good time to be in the food and beverage business. PBJ is a convenient way to gain exposure to the sector, with less risk than owning an individual stock.

Editor’s Note: The above article provides valuable investing insights, but it only scratches the surface of the financial acumen of our advisors. A colleague who deserves a particularly close look right now is Jim Fink, chief investment strategist of Velocity Trader.

Jim has developed a proprietary investing method that consistently beats Wall Street at its own game, in markets that are going up, down or sideways. His “310F” trade is the most accurate way we’ve ever seen to double your stake in just three days.

Want to learn about Jim Fink’s next trades? Click here now for details.