Mastercard (NYSE:MA) released its quarterly earnings data on Thursday. The credit services provider reported $1.64 earnings per share for the quarter, beating the consensus estimate of $1.52 by $0.12, Briefing.com reports. The company had revenue of $4.12 billion during the quarter, compared to analyst estimates of $4.01 billion. Mastercard had a net margin of 43.13% and a return on equity of 114.80%. Mastercard‘s revenue for the quarter was down 6.7% compared to the same quarter last year. During the same quarter in the previous year, the business posted $2.07 EPS.

The business also recently declared a quarterly dividend, which will be paid on Tuesday, February 9th. Investors of record on Friday, January 8th will be issued a $0.44 dividend. This is an increase from Mastercard‘s previous quarterly dividend of $0.40. This represents a $1.76 dividend on an annualized basis and a dividend yield of 0.54%. The ex-dividend date is Thursday, January 7th. Mastercard‘s payout ratio is 22.65%.

Mastercard declared that its Board of Directors has authorized a share buyback program on Tuesday, December 8th that authorizes the company to repurchase $6.00 billion in outstanding shares. This repurchase authorization authorizes the credit services provider to purchase up to 1.8% of its shares through open market purchases. Shares repurchase programs are often a sign that the company’s board believes its shares are undervalued.

See Also: What is the quiet period? 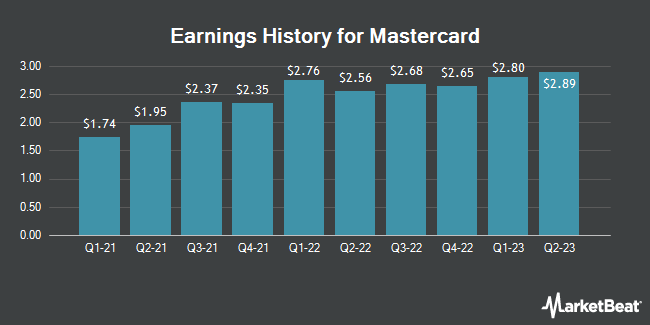 There are more than 200 publicly-traded real-estate investment trusts (REITs) that you can buy through your brokerage account. Given the sheer number of REITs, it can be hard to identify which real-estate stocks are going to outperform the market.

Fortunately, Wall Street’s brightest minds have already done this for us. Every year, analysts issue approximately 4,000 distinct recommendations for REITs. Analysts don’t always get their “buy” ratings right, but it’s worth taking a hard look when several analysts from different brokerages and research firms are giving “strong buy” and “buy” ratings to the same REIT.

This slide show lists the 15 REITs that have the highest average analyst recommendations from Wall Street’s equities research analysts over the last 12 months.

IBM – What do the Fundamentals Predict for IBM Common Stock (IBM) Stock?

Tesla Stock – Tesla Might Not Join The ESG Version of S&P 500. What It Means for Investors.

Four ways consumer spending will change once people are vaccinated

Tesla Stock - Tesla Might Not Join The ESG Version of S&P 500. What It Means for Investors.