Spooky. The first ones I thought of were the commission brokers. Those guys must be in agony. Prop traders? We make our own beds. We can earn a living… or fail to earn a living in any environment. Those reliant upon commission, sales traders and commission brokers need dance partners. Sales traders can at least be proactive, but commission brokers are not even permitted to use their own capital to attract institutional agency business. That business either has to walk in the door, or they have to have an idea that stands out from everything else that their competition is also sending the “buy-side” in order to “look smart” or get noticed.

Those who invest, but do something away from finance or financial services occupationally, may use trading volumes as a metric that helps in determining the conviction behind moves made in equity or options markets. Surely, that type of investor has noticed the incredible tailing off of aggregate trading volume across names listed at either the New York Stock Exchange or the Nasdaq Composite, really since late February. Commission brokers do have something in common with prop traders. They and their family only eat if they can kill. Don’t kill, don’t eat. Really the ultimate sport in both ego creation and deflation for A-type personalities. For most outside of the major investment banks, like entrepreneurs from any walk of life… things like base salaries and paid vacations/sick time are nothing but fond memories that they surrendered the day that they bet on themselves.

This is not just because of a three day holiday weekend, which itself ramps up the pressure on these types of market participants. Equity markets barely moved on Tuesday. Of all of the major indices that I watch, the Dow Jones Utility Average led the way on Tuesday, up 0.42%, with the S&P Mid-Cap 400 running in second place at up 0.06%. Not a typo. The Dow Jones Transportation Average brought up the rear at -0.32%. In between the two, one could find everything else. As far as sector performance, obviously as bond traders flooded into the long end of the Treasury security spectrum (forcing yields/rates much lower… compressing spreads), and dollar valuations eased, it would be the Utilities sector that led. On the other end, less than cheerful guidance emerged from the Applied Materials (AMAT) investor day placed pressure on the entire semiconductor space. The Philadelphia Semiconductor Index took a 1.2% hit, forcing the technology sector into last place on the daily performance tables.

That all said, the Sector Select Utilities SPDR ETF (XLU) only gained 0.53%, while it’s technology-based counterpart (XLK) only surrendered 0.43% for the day in spite of that pressure on the semis. The other nine sector based SPDRs moved even less.

What Does This Mean?

Could equity markets be ready to roll over? To tell you the truth, I thought that the risk to the downside had increased late last week. If you read me much, then you know how I think. I have no doubt in my military mind that sentiment is broadly too optimistic. Ever lighter aggregate trading volume at the top of the chart would usually indicate this. That moment where the buying starts, but the sellers are not quite ready to rock… but this is much more than a moment.

This downward pressure on the longer end of the yield curve and a US dollar getting a bit soft in comparison to reserve currency rivals would resist any urge by investors to get out of equities right now. Though we have discovered that in this modern era that bond prices can move just as quickly as market prices for any other asset class. Take profits with a Ten Year Note that pays just 1.65%, after hitting 1.75% support repeatedly over three weeks’ time? Profit taking would have to be the primary motivation unless the long end makes another run at those levels. Broader market fundamentals? What’s more fundamental than low interest rates? Despite ever growing federal debt-loads, and plans to grow that debt-load further and faster. Despite rapidly rising producer prices that will surely damage margin. Yet, only the Dow Transports among the major indices stands close to being technically overbought… incredible.

About that volume, though. You will read this morning elsewhere that Tuesday was the lightest trading day in the U.S. year to date, which is true but does not do justice to the magnitude of this lack of interest. For names constituent to the Nasdaq Composite, Tuesday trading volume amounted to a 39% discount to the 50 day simple moving trading volume average for that index. Tuesday was the eleventh consecutive trading session where volume fell short of that 50 day SMA. In fact, if one tosses out the half days of trading on Thanksgiving Friday and Christmas Eve, Tuesday was the Nasdaq Composite’s quietest day since November 13th of last year. The S&P 500 in comparison also fell short of the 50 day trading volume SMA on Tuesday, but “only” at a 25% discount. Tuesday was the quietest day for the S&P 500 since March 11th, so just quiet, but not amazingly so.

I’ll put it bluntly. As long as the spread between the yields of the Three Month T-Bill and the Ten Year Note look like this…

Then I think I can tentatively put some cash back to work, which I have been doing this week. In normal times (Honestly, what is normal? Will we ever see normal again?), I would look at the inability of longer term interest rates to break through to the upside as a response to either reduced expectations for economic growth and/or consumer level inflation. In this case, neither is true. We (meaning both the economics community and the public at large) expect some inflation, and expect to see a rapid increase in economic activity… or velocity.

This means that bond markets either expect artificial intervention by the Federal Reserve Bank to continue in earnest even should that stance become overtly inappropriate, or the U.S. is so far out in front of the rest of the developed world in terms of vaccination that debt markets are not only pricing in foreign interest in deeply (for the times) positive nominal interest rates, but perhaps a somewhat temporary period reflective of a safe-haven induced premium.

I would say that my cash levels are well off of last week’s highs, but still elevated relative to where they had been for months. As readers know, I have been adding to both Discovery (DISCA) as well as ViacomCBS (VIAC) on dips. Monday was a gift as far as those two are concerned. I am about 80% of the way in on both positions. I have also initiated and am in the early stages of building a long position in McDonald’s (MCD) ahead of earnings season. As the economy reopens and those spread across the middle to lower bound of the income distribution curve find themselves stung by inflation, I would expect that fast food, McDonalds in particular, may become what many Americans consider to be “eating out.” 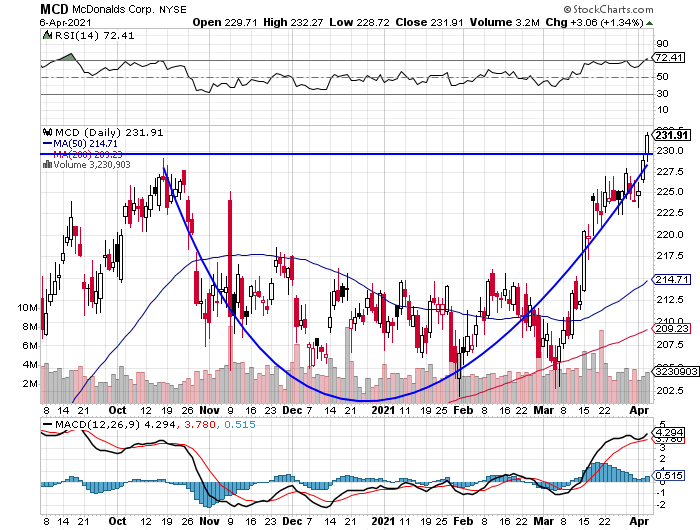 Readers will note that MCD appears to be trying to break out of a six month long “saucer” pattern. What’s a saucer? Basically in the world of technical analysis, a saucer acts much like a cup, with the exception that the pattern has to be lengthy and needs to be too shallow to be referred to as a cup. I know what you want to ask. Yes, a saucer can develop a handle just as easily as a cup can, which is why I have yet to get aggressive on this trade.

That, and the shares are now well above both of the simple moving averages that matter to portfolio managers. Keep in mind if you are thinking of hopping on board that an RSI reading of 72 does make these shares look overbought. One thing I do like is that MCD is up more than 14% in about a month, without creating a single gap. Simply put, though aggressive, this rally has been built on something. That something is going to be Q1 earnings, not due for another three weeks.

On that note, JP Morgan (JPM) and Wells Fargo (WFC) will again bat lead-off a week from today, getting the season underway. At least that will change the trading volume profile for equity markets. Commission brokers can’t wait. Should be a doozy.

The Fed (All Times Eastern)

Get an email alert each time I write an article for Real Money. Click the “+Follow” next to my byline to this article.

Luxury Apartments – Inside the Barbizon Hotel for Women

Scott Morrison – National summit to be held in July

McDonalds – Smooth the Bumps with the iShares USMV ETF

McDonalds – McDonald’s will close hundreds of locations in Walmart stores

McDonalds – McDonald’s Is Closing Hundreds of Its Walmart Restaurants

Scott Morrison - National summit to be held in July

Justin Trudeau News - iPolitics AM: Trudeau checks in with premiers as Freeland fires up webcam for virtual meet-up with G7 counterparts