Comparably has shared its best company culture list recently that ranks Google on top. It has also shared its best CEOs list and the one that is best for diversity and women. It is important to note that Comparably is a platform that monitors job careers, workplace culture, and compensation based on employees reviews and questionnaires. It shares the annual list for the best large companies and small/mid-sized companies to guide the users on which company is best for them to work and worth a while.

Comparably’s companies with best culture list also holds Microsoft on 6th position. Nextdoor also reached number 37 for the first time in 2020’s list. On the other hand, Facebook gains 16th position that has previously ranked 31st in the 2019 list of best large companies. It has marked that both these companies have a constant record of rebounding on top in Comparably’s annual list for four years now.

In the list of best CEOs, the CEO of Microsoft, Natya Nadella, stands at number 4 in all four years compiled list. However, Mark Zuckerburg, the CEO of Facebook, has slipped down to number 40 from number 39 in the 2020’s list. Jeff, the former LinkedIn CEO who was succeeded by Ryan, was reportedly on the ranking, but the new CEO has not yet served much to get noticed. Along with this, the women CEO of Next door company, Sarah Friar, has also made it to the 2nd position from top in the 2020 list of best CEOs of small/mid-sized companies.

In terms of diversity, Nextdoor has ranked number 25 on the small or mid-sized companies list, Facebook at number 8, LinkedIn at number 30. Yet, Microsoft, the parent company of LinkedIn, reached the top of the list. In the annual list of best companies for women, Facebook and Microsoft stood side by side. That is on number 11 and number 12, respectively.

Comparably has also shared its criteria or process of determining the ranking in one of the reports. It is based on some questions related to core culture metrics. It includes questions of compensation, working team, working environment, leadership, company outlook, work-life balance, and the benefits of working in the company. Comparably says that this procedure helps them in acquiring a comprehensively accurate review of the company.

All the Comparably’s annual list for best companies, best CEOs, best diversity, and best companies for women are in alphabetical order and not in terms of ranking. This data claims that Facebook, LinkedIn, and Microsoft have stayed almost on top in all the four years of Comparably’s compilation. 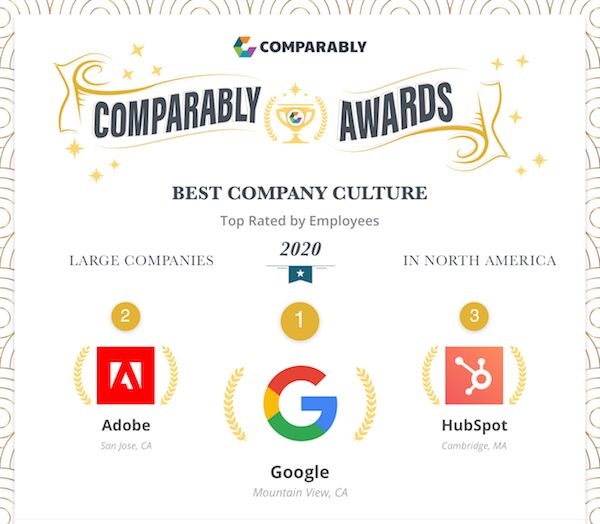 Read next: The Best Employer Among Major Tech Companies

Microsoft – Apple’s iOS 15 may not support for older devices like iPhone 6, iPhone 6s plus and iPhone SE