In the wake of a record year for volume, Ginnie Mae has accepted its first mortgage security backed entirely by pools of loans with electronic promissory notes, bringing the industry closer to broad adoption.

The transaction consisting of $24 million in securitized Ginnie pools followed a 265% jump in broader industry eNote registrations last year, and the establishment of a program through which Ginnie began recruiting new applicants to test its processing of the electronic documents.

Industry interest in the e-docs that establish repayment obligations is up both because Ginnie’s transaction adds momentum to broader housing agency adoption of the technology, and because the pandemic and origination boom have increased demand for automation that accommodates remote work and efficient processing.

“The Ginnie Mae note is the last item in our closing document stack that is paper. With this and an accommodation in the Texas electronic notary law that allows e-docs to be electronically created, we can close every piece of our doc stack electronically,” said Jeff Bode, owner, president and CEO of MidAmerica Mortgage, a lender based in the Lone Star State.

MidAmerica hopes to help Ginnie test eNotes as soon as it can finish hammering out a document-custodian agreement that will accommodate them, and estimates it could save up to eight days in processing time by minimizing the need to deliver paper documents.

The increase in eNotes on the MERS Registry over the past two years suggests that value is becoming more compelling. Last year there were 464,691 eNotes registered, up from 127,178 in 2019, and 16,950 in 2018, according to MERSCORP Holdings, a division of Intercontinental Exchange that owns the registry, which serves as the industry’s system of record. 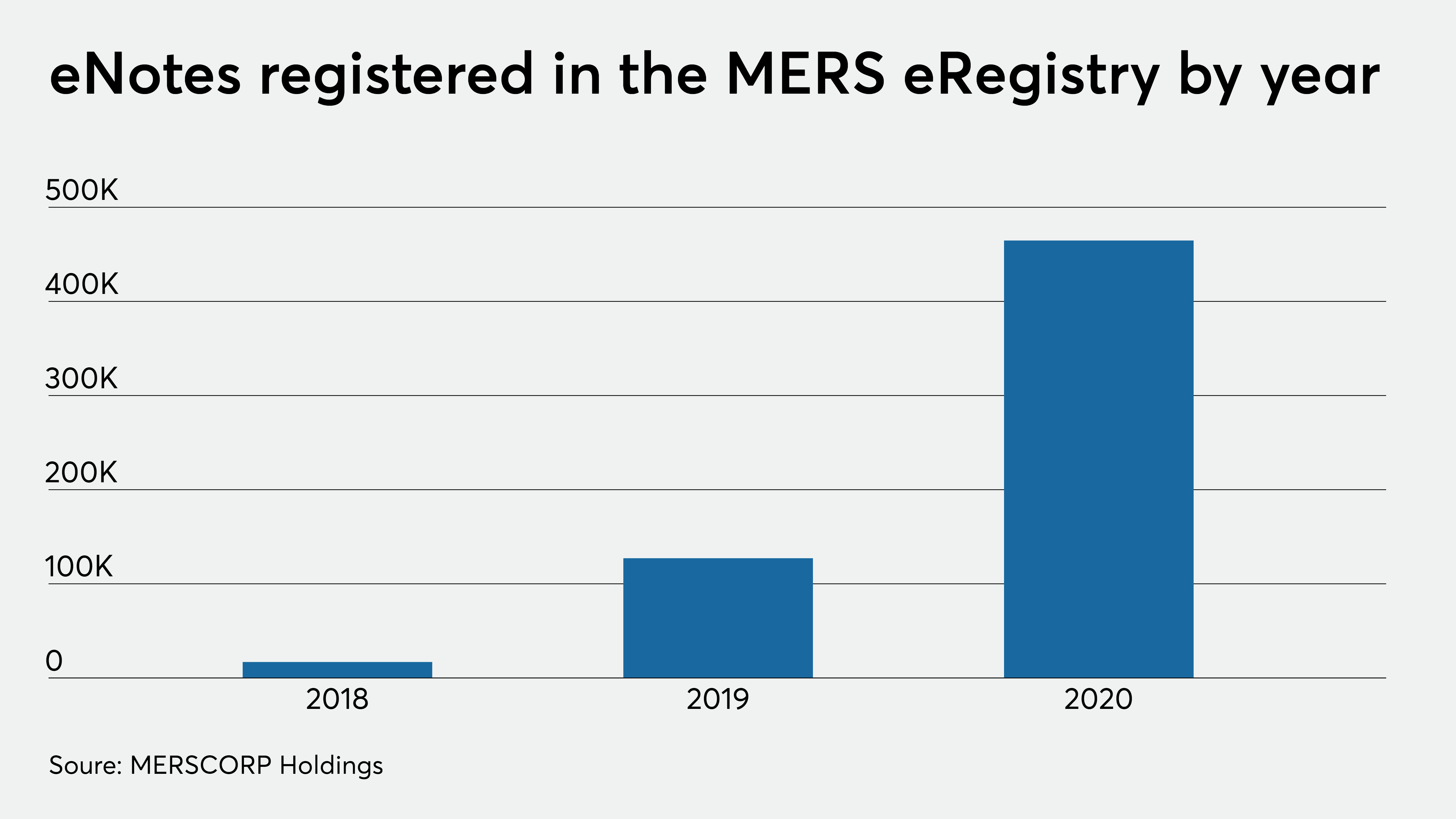 “In addition to record volume of eNotes registered on the MERS eRegistry, there’s also been a significant increase in companies both integrating with the MERS eRegistry and performing transactions on the system,” Joe Tyrrell, president, ICE Mortgage Technology, said in an emailed statement.

The establishment of eNote processes at Ginnie, Fannie, Freddie and the Federal Home loan Banks have gotten the industry over a large hurdle to adoption in recent years, said Seth Appleton, president at MISMO, a nonprofit arm of the Mortgage Bankers Association that works with volunteers to help set industry standards. Appleton is a former Ginnie EVP.

“This securitization means we’re clearly heading toward the point where companies won’t have to bifurcate systems or worry about if they can use an eNote based on the loan a borrower chooses,” Appleton said.

However, while great strides have been made in eNote use, the fact that issuers and Ginnie are still in the process of establishing agreements and other standards for them means the market is nowhere close to broad adoption of the technology yet.

“Since Fannie Mae and Freddie Mac moved down this road first, we did as much as we could to build on their work, but there are a lot of cases where we have to develop policy and infrastructure for our business model,” said Michael Drayne, acting executive vice president at Ginnie Mae.

Thirteen issuers have initiated testing the Ginnie Mae process through its digital mortgage program, with five having completed the protocols, and the government agency is continuing to accept applications.

With eNotes still somewhat of a work in progress, their efficiencies may be limited now, but the economic incentive to use the technology is likely to grow as they become standardized and their costs relative to alternatives fall.

“If it becomes expensive not to use eNotes, it could become more of a problem if you don’t choose to make the investment in them. Then perhaps issuers will have to make some interesting decisions about whether to adopt,” said Drayne. “I don’t think we’re there yet, though. We’re just trying to get to the point where they can be highly utilized.”

Although a queue to test eNote adoption is forming at Ginnie, most of the activity to date has been generated by nonbank Quicken Loans, an early adopter that has been going through a process of rebranding under the Rocket name since going public last year.

Relatively few lenders use eNotes, but with a big player like Rocket involved, the technology’s influence is growing, according to Austin Kilgore, director, digital lending at Javelin Strategy & Research. (Kilgore is a former National Mortgage News editor-in-chief.)

“We’re at least three to five years away from seeing more than 50% of mortgage volume as eNotes,” Kilgore said in an email. “The recent influx of equity capital among large nonbank lenders provides additional resources to make the shift, and that will force the hands of the large banks to follow suit.”