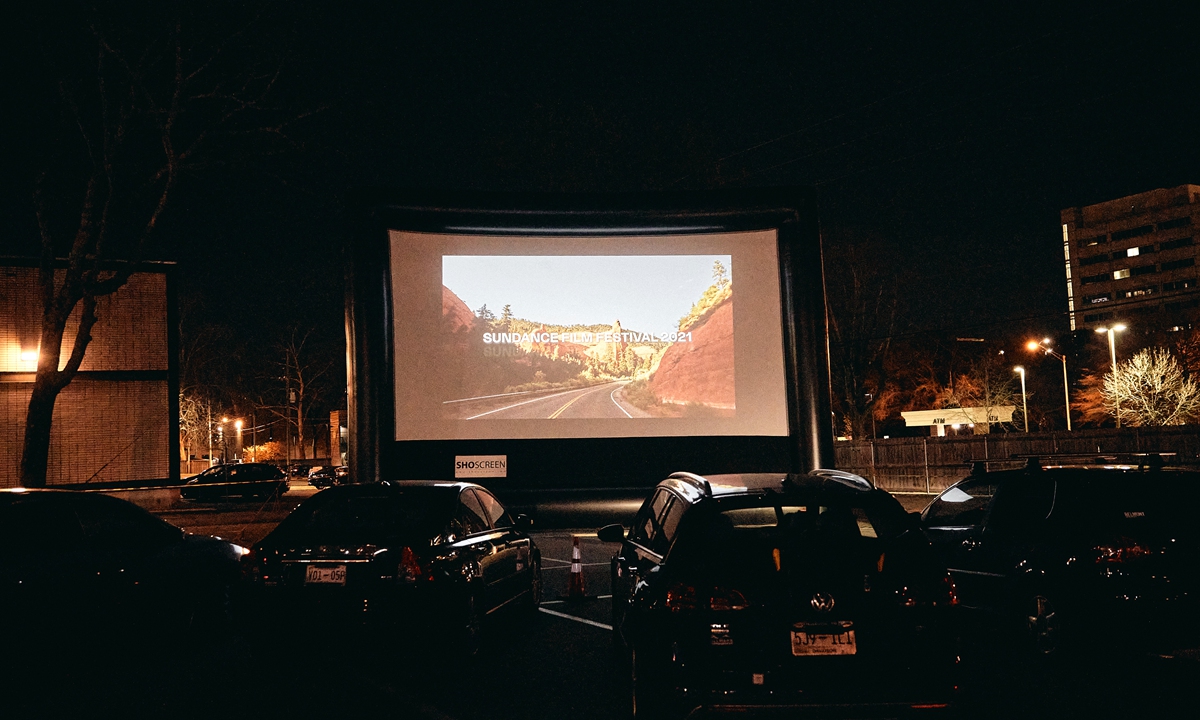 A drive-in screening is held in the parking lot of the Belcourt Theatre during the 2021 Sundance Film Festival’s satellite screening series on Friday. Photo: AFP

A virus horror and a last-day-on-Earth comedy – both entirely devised, shot and edited during the pandemic – brought an apocalyptic flavor Friday to the Sundance film festival, which has moved online due to COVID-19.

Speaking after “virtual” world premieres at the influential US indie event, the films’ creators described how they funneled their boredom and anxiety into creativity by quickly finding ways to safely film during long lockdowns.

“I had a slightly hysterical episode about one week into the lockdown… I needed to calm down and part of the calming down was to try and write,” recalled In The Earth director Ben Wheatley.

The first new production to film in the UK after its initial March lockdown, the horror is set in a remote English forest where scientists are conducting mysterious experiments while a virus sweeps through the cities. “It was a weird amount of pressure on us… all the protocols were brand new at that point,” said Wheatley.

While COVID-19 does not provide the main plot of the movie, it serves as an essential backdrop to the film’s events.

Wheatley told an online Q&A that the introduction of social distancing and lockdown had made even newly finished films look like they were “from another age.”

“You’d sit there and watch a movie and it has these massive crowd scenes in, or all their concerns were concerns of two years ago,” he said.

“I think that horror films especially, but movies in general, should reflect the moment that you’re in.”

Meanwhile, comedy How It Ends imagines Los Angeles on the day an asteroid is due to wipe out the planet.

Liza (played by co-director Zoe Lister-Jones) sets out on foot to confront those who have wronged her – and make a few last-minute apologies of her own – all en route to a wild, end-of-days party.

Conceived in the early weeks of California’s lockdown and shot in summer, the movie also takes place almost entirely outdoors – on the city’s permanently sunny streets, gardens and pool decks.

The filmmakers raced to finish and release the film “while we are all still struggling with some of this emotional minefield,” said Lister-Jones, describing the process as therapeutic during “a very bleak time.”

Helen Hunt, Bradley Whitford and Olivia Wilde are among the famous faces who pop up for socially-distanced conversations with Zoe during her “existential scavenger hunt” – many shot outside the A-listers’ real-life homes.

“Normally when someone comes over with two cameras and a sound guy and an actor, I’m like ‘I’m excited to be in your home movie,'” joked Charlie Day, who appears with his wife Mary Elizabeth Ellis.

“It was super quick – I got a call one day saying ‘hey, we’re going to show up at your house tomorrow.’ I didn’t really know what I was getting myself into,” added Lamorne Morris.

Friday also saw the Sundance premiere of The Pink Cloud, in which two strangers are forced to cohabit indefinitely when a toxic cloud spreads across the planet midway through their one-night stand, making the outside air deadly.

However, the eerily prescient Brazilian sci-fi was written and shot a year before COVID-19.

Top US indie film festival Sundance, co-founded by Robert Redford, typically takes place each winter in the Utah mountains, where multi-million dollar deals are struck for many of the year’s most coveted arthouse hits.

Due to the pandemic, all of the 72 feature films in 2021 are making their premieres online, with the shortened festival ending Wednesday.