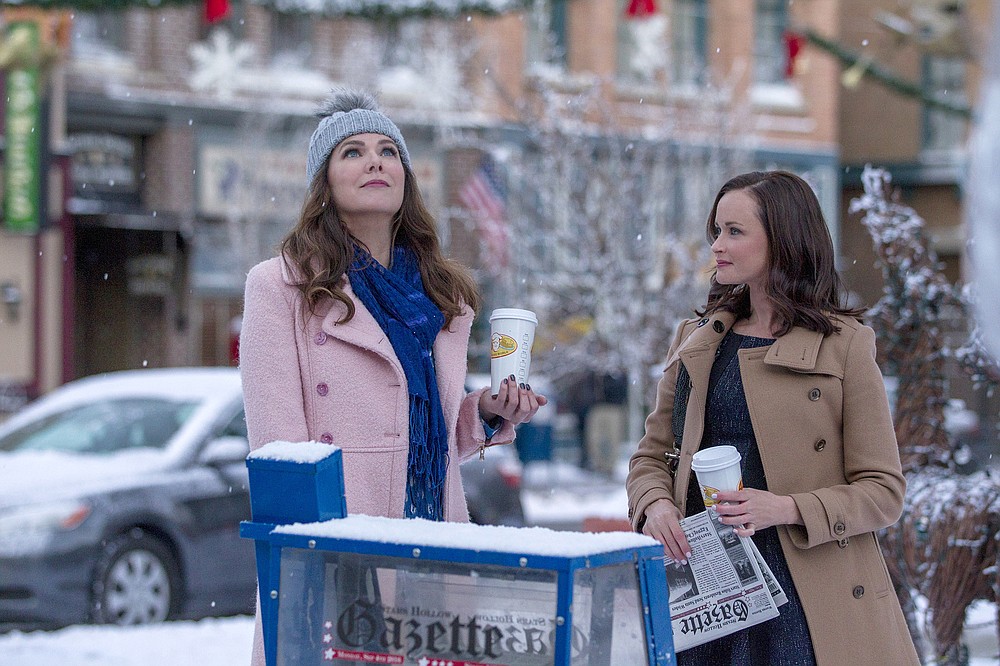 Lauren Graham (left) and Alexis Bledel star in “Gilmore Girls,” one of the many shows and movies people are rewatching during the quarantine. (Netflix/Saeed Adyani)

When the pandemic struck, Julia Heney found comfort in the afterlife.

Well, a show about the afterlife. Almost by accident, the 32-year-old Chicago resident fell into rewatching “The Good Place” after shutdowns began.

“It’s just so soothing to me,” Heney said. “You can turn it on and, in any episode, they’re going to try to be good. No one is going to be violently murdered. There’s no huge, scary scenes that will pop out at you with the unexpected.

“I just keep looping it,” she added. To the point that’s it become something of a joke in her house. Her boyfriend will walk into the room and say, “‘Oh, I see you’re watching your favorite show again.’”

Many have escalated their rewatching of favorite movies and TV shows during the pandemic, finding them to be creature comforts while stranded in their homes indefinitely, especially with the ever-growing number of streaming services making this content just a click away. All this rewatching raises the question: What makes something rewatchable in the first place, beyond the simple fact that you liked it?

People’s reasons for rewatching — and their methods of doing so — vary. For some, the timeless activity has taken on a more creative form. Take Brooklyn resident Natasha Padilla, who began hosting a virtual “Zoom(ovie)” night with friends every Saturday, choosing various themes such as Christian Slater movies or summer flicks. Eventually, she began digitizing old VHS tapes from her closet, only to find herself rewatching classic MTV award shows and ’90s commercials featuring Cindy Crawford and Little Richard. (Her takeaway? “Everyone was shilling for some kind of sugar.”)

Or Maggie Mertens, a 33-year-old freelance writer in Seattle who teamed up with her college friend and fellow journalist Megan Burbank to dive back into “Gilmore Girls” — “to deal with the stress” and to give “us something else to talk about.” They took things a step further and started a newsletter on Substack called Gilmore Women, in which, as its tagline states, they “discuss everything that’s wrong with every episode of ‘Gilmore Girls’ & why we still love it.”

“It’s literally the show I would watch when I was a heartbroken teen,” Mertens said when asked why they chose “Gilmore Girls.” “So something about it just being so familiar, I think. And reminding me of simpler times, maybe?” But, like many older programs, aspects of it haven’t aged well, so the newsletter allows the two to explore those concerns while relishing in “this world where the drama is about feelings and family connection and not all the big-picture world problems outside.”

Movies are also being revisited, and not everyone is reaching for soothing fare. Many of those cinefans are chronicling their treks into the past on Letterboxd, a social media platform dedicated to publicly journaling movie-watching.

The communal aspect of the platform proved particularly enticing during isolation. David Larkin, the company’s “business guy,” as he describes himself, said the rate of commenting among its 3 million users nearly doubled in 2020. And because users follow one another, one’s rewatch of, say, “Erin Brockovich” might prompt others to follow suit.

Larkin followed many personal rewatch journeys while embarking on a couple of his own. He screened all of Michael Mann’s movies, from “Heat” (a rewatch for about the 12th time) to “Blackhat” (an unfortunate first-timer. Oddly, this is the same path this reporter took back in April.) Another found him going back through the movies of Sidney Lumet and appreciating them in a new light.

“He made three movies almost in a row about corrupt cops in New York. It was so interesting to watch them sequentially and see how the themes got more complex and morally ambiguous,” Larkin said. “It was a great opportunity to rewatch some of your favorites and be more thoughtful about them.”

While being trapped in homes may have converted some people into rewatchers, the contingent was strong even before the pandemic. No one understands the pleasure of rewatching old movies better than the hosts of the Ringer podcast “The Rewatchables.”

In each episode, a roundtable of Ringer personalities such as Bill Simmons, Chris Ryan, Sean Fennessey and Mallory Rubin dive deeply into a movie they deem rewatchable — ranging from “The Godfather” and “Home Alone” to “Den of Thieves.” They break each episode into various categories, including “most rewatchable scene,” “what’s aged the worst (and best)?” and “the Dion Waiters heat check award,” which is given to an actor who does the most with the least amount of screen time, named for a National Basketball Association player prone to hot streaks during games.

The idea for the podcast, Fennessey said, came from Simmons’ and Ryan’s mutual love for “Heat,” which they had quoted to each other for years. They wanted to do a podcast “just to talk about the movie,” which has now grown into a popular series with more than 150 entries.

As for what makes a movie rewatchable, “there’s not necessarily a unified theory,” said Fennessey. “I do think it needs four to five incredible rewatchable scenes, the moments, whether they’re one minute or 15 minutes, that either require a deeper level of understanding or are just fun to re-create in your mind.”

It’s also helpful to have quotable lines and actors who spark unexpected conversation, as evidenced by an episode about “The Shining” that led to an examination of Jack Nicholson’s career.

Somewhat ironically, Fenn- essey said, it’s often “the movies that we are trying to figure out how they could have worked better that make them rewatchable for us, because they don’t necessarily vanish from our minds.”

Plus, there’s the psychological component of rewatching. “There is a kind of preservation not just of film history but of nostalgia that people will always have. They’ll always want to have a connectivity to something they saw when they were younger,” he said. “So many of these movies that we do that are effective are movies that people go to when they’re between the ages of 9 and 25. Those things just kind of stick to your ribs.”

Clay Routledge, a professor of management at North Dakota State University, who has studied nostalgia, agrees with the sentiment. He suggested the impulse to rewatch such films comes from the fact that “we’re meaning-making animals, as humans.” We like to ask: Who am I? What made me who I am? Revisiting the movies and TV shows we grew up on can feel like a rumination on those questions.

“It’s the way our minds naturally work, trying to find some continuity and connection across time,” he said.

The networks figured out how to select a movie that sparks such connections — often one that “captures the collective attention of our culture, which serve as time stamps,” like “Jaws” is to the summer of 1975. And they began replaying these films ad nauseam, creating ever more connections.

Now they can connect people across generations. Routledge grew up with the original “Star Wars” franchise, and rewatching those films always reminded him of his youth. “I then introduced them to my son, who had no connection to them himself,” he said. Now, those movies are meaningful to his son as well. “That’s something that I’ve transmitted to him, not necessarily consciously or purposefully.”

Of course, sometimes, it doesn’t have to be particularly profound.

“It’s comforting,” Padilla said of her Zoom movie nights and her personal pandemic rewatching. “These are reliable things, where you can flash back to a happier, simpler time in your life.”