Researchers in the United States have demonstrated the long-term durability of the antibody responses elicited by Moderna’s mRNA-1273 vaccine against variants of severe acute respiratory syndrome coronavirus 2 (SARS-CoV-2) – the agent that causes coronavirus disease 2019 (COVID-19).

The team comprehensively assessed the impact the B.1.1.7 variant (that emerged in the UK) and the B.1.351 (South Africa), P.1 (Brazil), B.1.429 (California), and B.1.526 (New York) variants had on the binding, neutralizing, and angiotensin-converting enzyme 2 (ACE2)-blocking antibodies elicited by the vaccine over seven months. The ACE2 receptor is the host cell structure that SARS-CoV-2 attaches to as the initial stage of the infection process.

The researchers report that cross-reactive neutralizing responses were rare following only one dose of the mRNA-1273 vaccine.

However, when the response to the second dose was at a peak, all participants exhibited robust antibody activity against all of the variants.

The researchers say the findings support the use of the vaccine to protect against variants and complement ongoing clinical protection studies to inform the potential need for additional booster vaccinations.

The study was conducted by Nicole Doria-Rose and colleagues from the National Institutes of Health in Bethesda, Maryland, and researchers from Emory University School of Medicine in Atlanta, Georgia, Emmes Company in Rockville, Maryland, Moderna Inc. in Cambridge, Massachusetts, and Kaiser Permanente Washington Health Research Institute in Seattle.

A pre-print version of the research paper is available on the bioRxiv* server, while the article undergoes peer review. 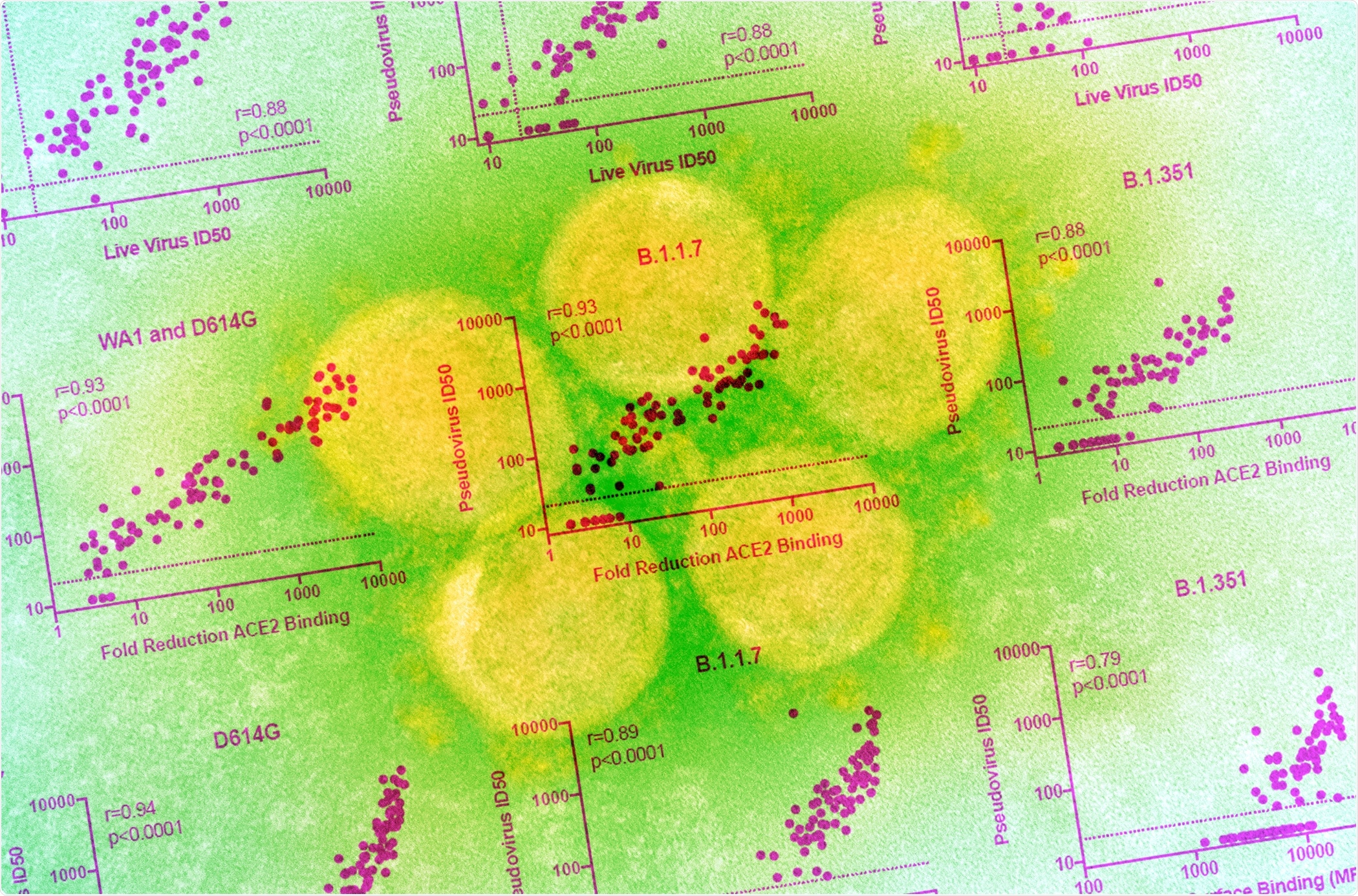 Variants of Concern have been shown to escape antibody neutralization

Since the COVID-19 pandemic first began in late December 2019, SARS-CoV-2 Variants of Concern (VOCs) have emerged that exhibit resistance to the neutralizing antibody activity elicited by natural infection or vaccination.

By the summer of 2020, the original initial Wuhan-Hu-1 (WA1) strain was replaced by the B.1 variant that contains the mutation D614G in the viral spike protein. The spike is the main structure the virus uses to infect host cells and the primary target of neutralizing antibodies.

Other variants have since emerged that have been shown to exhibit increased transmissibility.

The first variants to capture the world’s attention were the B.1.1.7 lineage that emerged in the UK and the B.1.351 variant that emerged in South Africa. These VOCs harbor 8 or 9 mutations in the spike protein that were not present in the original WA1 strain.

Importantly, the B.1.351 variant has been shown to be up to 15 times more resistant to antibody neutralization by sera from individuals vaccinated with WA1-based vaccines.

More recently, the VOCs P.1 (Brazil) and B.1.429 (California) and the Variant of Interest B.1.526 (New York) have been shown to exhibit modest resistance to neutralization by sera from convalescent individuals and vaccinees.

“These prior studies have evaluated vaccine sera from vaccinated individuals only at time points soon after the first or second dose of various vaccines. Likewise, while clinical studies have reported efficacy and effectiveness against the B.1.1.7 and B.1.351 variants, these have been in the first several months following vaccination,” says Doria-Rose and colleagues.

The team says that while such data provide critical insights into the vaccines’ performance against these viral variants, they have not addressed the durability of cross-reactive binding and functional antibodies.

What did the researchers do?

Serum samples were taken from individuals who received two 100 mcg doses of the vaccine (administered 28 days apart) and were followed for seven months following the first dose.

What did the study find?

Cross-reactive antibody neutralizing responses to the variants were rare following a single dose of mRNA-1273.

“Our observation of the limited magnitude and breadth of neutralizing activity at day 29 underscores the importance of the full two-dose regimen of an mRNA vaccine for protection against SARS-CoV-2 variants,” writes the team.

However, two weeks after the second dose was administered, all participants exhibited robust antibody responses to all of the variants.

“Importantly, all subjects had broadly cross-reactive activity against all variants at Day 43, the peak of the response,” say the researchers.

Furthermore, binding and functional antibodies against the variants persisted in most individuals, albeit at low levels, for six months following the second vaccine dose. 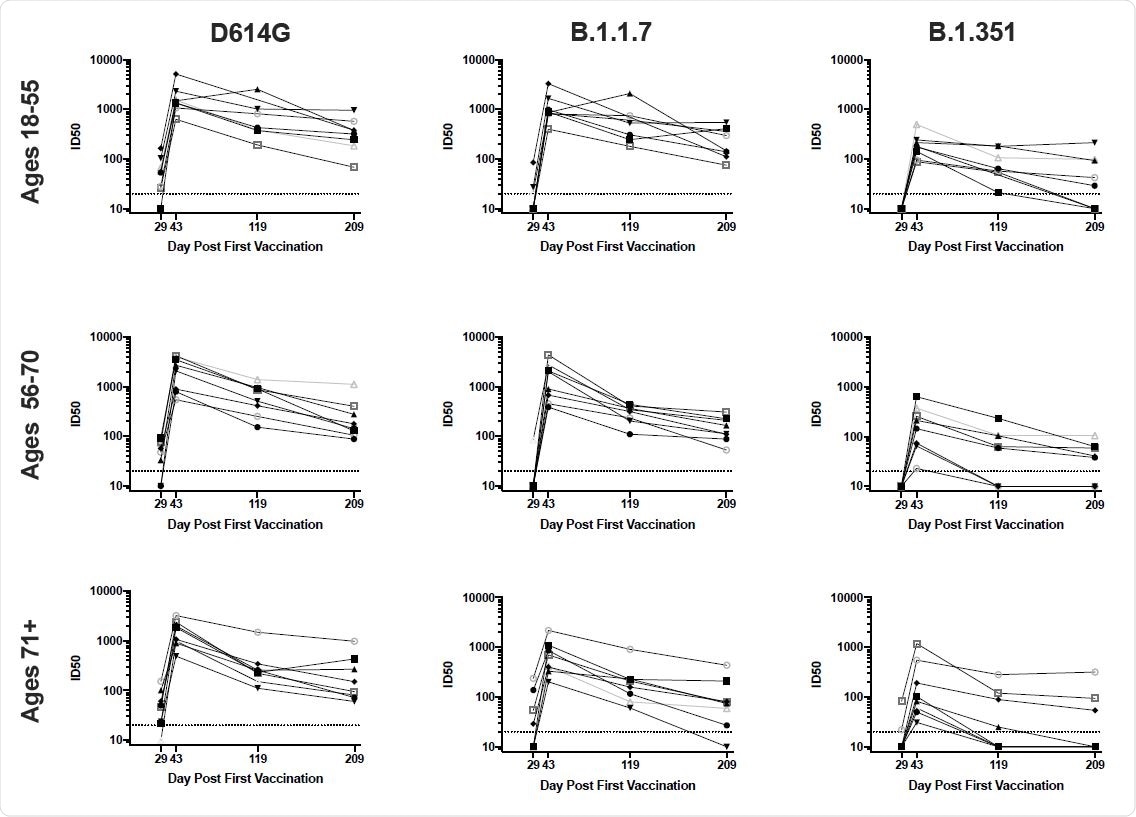 The B.1.351 variant was the most resistant to antibody targeting

All of the assays showed that mutations present in B.1.1.7 had a minimal impact on antibody recognition and function. In contrast, mutations in B.1.351 had a considerably greater effect, ranging from 3- to 15-fold, depending on the assay. The variants P.1, B.1.429, and B.1.526 variants exhibited an intermediate effect.

However, the team says that although antibody activity against the most resistant variant – B.1.351 – was substantially reduced over time, it was not entirely abrogated. On day 209, 58% of sera still exhibited detectable and robust neutralizing activity against B.1.351 in the pseudovirus assay, as did 63% in the live-virus assay.

Furthermore, all individuals retained binding activity, and 79% could block the binding of ACE2 to the RBD of B.1.351.

What did the team conclude?

“These data complement ongoing studies of clinical protection to inform the potential need for additional booster vaccinations,” they write.

The team says that while additional studies will be needed to address the impact of new variants that are likely to arise, the current findings support the use of this vaccine to protect against variants.

bioRxiv publishes preliminary scientific reports that are not peer-reviewed and, therefore, should not be regarded as conclusive, guide clinical practice/health-related behavior, or treated as established information.