Researchers in the United States have shown that the Pfizer/BioNTech and Moderna messenger RNA (mRNA) vaccines are effective at generating T-cell immunity against severe acute respiratory syndrome coronavirus 2 (SARS-CoV-2) – the agent that causes coronavirus disease 2019 (COVID-19).

The team found that vaccinated individuals developed robust T-cell responses to the SARS-CoV-2 spike protein that the virus uses to bind to and infect host cells.

The researchers – from Massachusetts General Hospital and Harvard Medical School in Boston – report that the T-cell response increased significantly from baseline after just one vaccine dose. After a second dose, the response was more potent than in a convalescent cohort.

However, Marcela Maus and colleagues also found that vaccinated individuals had diminished T-cell responses against the SARS-CoV-2 variants that emerged in the UK. (B.1.1.7), South Africa (B.1.351), and Brazil (P1).

The team says it will be important to determine how T-cell immunity impacts the aggregate immune response to the variants and whether a reduced T-cell response translates to adverse clinical outcomes.

A pre-print version of the research paper is available on the bioRxiv* server, while the article undergoes peer review. 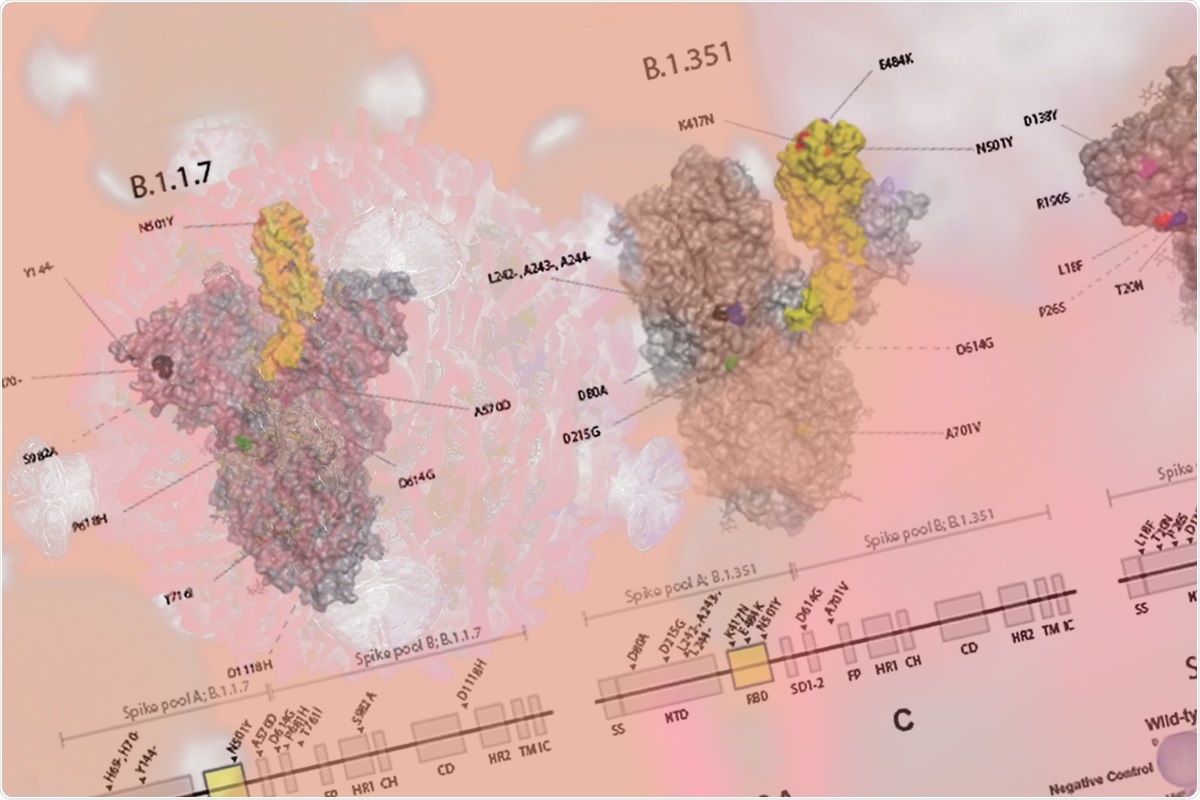 Concerns have arisen regarding vaccine efficacy against variants

As of January 2021, the Pfizer/BioNTech and Moderna COVID-19 vaccines that are designed to elicit a humoral (antibody) response against the SARS-CoV-2 spike protein were authorized for emergency use by the U.S. Food and Drug Administration.

However, since the first cases of SARS-CoV-2 were first identified in Wuhan, China, in late December 2019, several new variants have emerged. These new viral lineages contain mutations that have been shown to increase transmissibility and help the virus to escape the antibody response generated by vaccination.

“The emergence of more transmissible and virulent SARS-CoV-2 variants, coinciding with evidence of escape from neutralizing antibodies to the wild-type virus, raises concerns regarding the effectiveness of currently available vaccines,” writes the team. 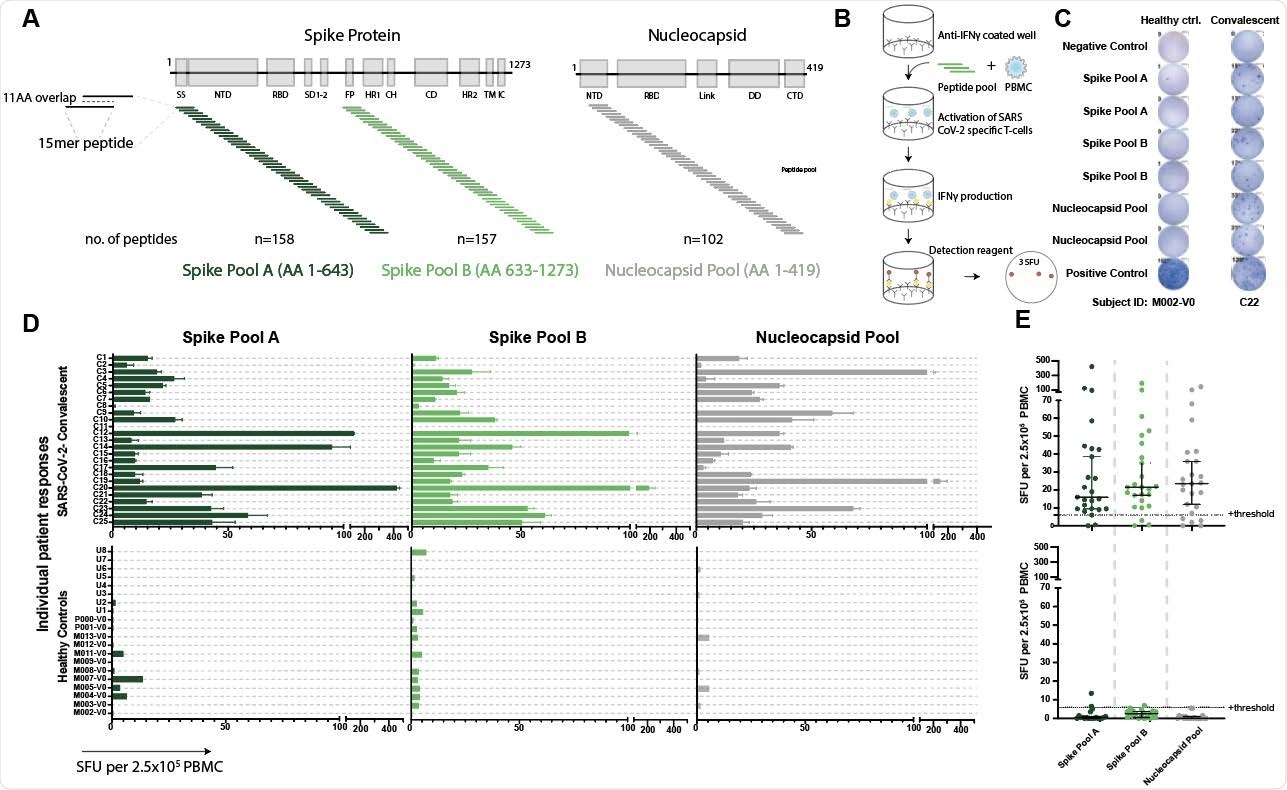 Most reports of immunity to SARS-CoV-2 following vaccination or natural infection have focused on humoral immunity and measured anti-spike antibodies in peripheral blood.

Some reports have shown that antibody levels wane during the first 3 to 6 months, while others have demonstrated a more sustained humoral response that persists for 5 to 8 months.

Continued immunity in individuals following vaccination or infection is crucial to achieving the population or “herd” immunity needed to stop the virus from spreading.

In the absence of effective humoral protection, T-cell immunity to the recently emerged variants may be sufficient for viral clearance, they add. 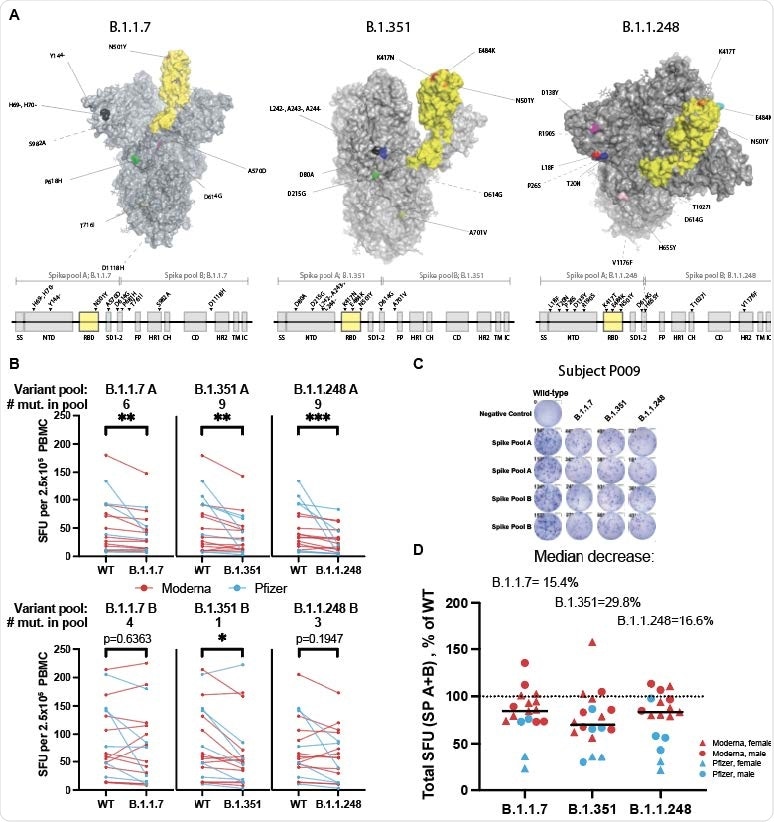 Spike variants B.1.1.7, B.1.351, and B.1.1.248 induce a diminished T-cell response compared to the wild-type protein A. SARS-CoV-2 spike protein variants B.1.1.7, B.1.351 and B.1.1.248 with mutations compared to the vaccine spike sequence noted (RBD in shown yellow). Location of mutations in primary sequence is depicted with reference to the corresponding spike pool affected. B. ELISpot response to mutant versus wild type (WT) spike peptide pools (n=18-20; Moderna=red, Pfizer=blue; Wilcoxon matched-pairs signed-ranks test with Bonferroni correction; B.1.1.7 A **p=0.0015, B.1.351 A **p=0.0015, B.1.1.248 A ***p=0.0006; B.1.351 B *p=0.0144. C. ELISpot results against WT and variant peptides shown for a representative patient. D. ELISpot response to variant peptide pools relative to individual subject’s WT response. Medians shown as black lines. Dotted line represents response to WT (100%). Only subjects with a positive ELISpot against WT (>6) were included for variant peptide analysis.

What did the researchers do?

In the vaccinated individuals (11 Pfizer/BioNTech, 18 Moderna), the T-cell response was measured prior to inoculation, and then at a median of 22 days (range 16–30 days) following a first dose and at a median of 59 days following the first dose (range 38–204 days) when all vaccinees had also received a second dose.

What did they find?

The team reports that T-cell responses to the wild-type spike protein increased significantly from baseline after an initial vaccine dose, even as soon as 7 days following immunization. The T-cell responses were equivalent to those observed in convalescent individuals.

“The presence of a robust T-cell response comparable to convalescent patients after a single inoculation could suggest a similar level of SARS-CoV-2 protection and warrants further investigation as a possible measure to increase vaccine availability in resource-limited settings,” write the researchers.

Following a second dose, the median spike-specific T cell responses were higher in the vaccinees than in the convalescent individuals.

What do the authors advise?

The researchers say the decrease in T-cell response to the variants was smaller than has been observed in antibody neutralization assays.

“However, it will be important to determine how T-cell immunity impacts aggregate immune response to the variant SARS-CoV-2 viruses and if this reduction translates to adverse clinical outcomes,” concludes the team.

bioRxiv publishes preliminary scientific reports that are not peer-reviewed and, therefore, should not be regarded as conclusive, guide clinical practice/health-related behavior, or treated as established information.

Moderna (MRNA) Gains As Market Dips: What You Should Know

AbCellera and Moderna team up to develop antibody therapies

AbCellera and Moderna team up to develop antibody therapies