Last week we saw MSI do the hokey-cokey with a GeForce RTX 3080 Ti category in its official product pages. On Saturday a much more significant leak occurred when VideoCardz published some MSI branded slides that outline the Suprim series of GPUs, including the yet to be announced GeForce RTX 3080 Ti & RTX 3070 Ti models. The biggest focus of the slides appears to be upon the respective Suprim thermal solution bolted onto each graphics card model, but the data sheet titles reveal VRAM quantities for each model too.

It appears to be that MSI is readying two Suprim GeForce RTX 3080 Ti and two RTX 3070 Ti models. Each GPU gets a standard and ‘X’ version, with the ‘X’ denoting a factory OC version of the GPU. In MSI Suprim graphics cards that are already official I observe an approx 5 per cent in the factory boost clocks for the ‘X’ version. 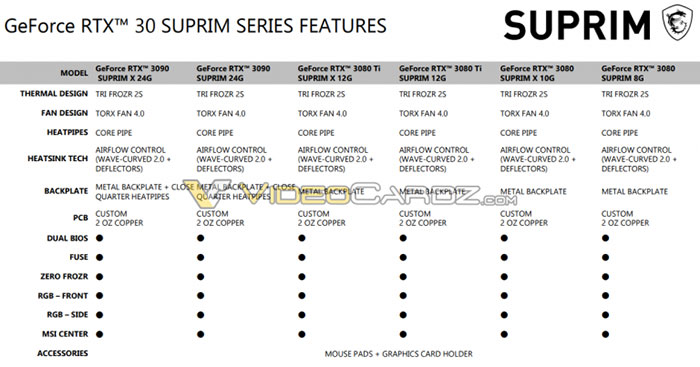 Above you can see the data shared on the MSI GeForce RTX 3080 Ti Suprim 12G. That last part of the name means that these graphics cards come with 12GB of GDDR6 memory on board. You can see that these graphics cards come with the Tri Frozr 2S cooler, which seems to be an identical implementation of this solution as features with the existing MSI GeForce RTX 3080 Suprim models. Moving onto the next slide, with RTX 3070 Ti Suprim details, you can see this has the same Tri Frozr 2S thermal solution but with a flow-through backplate. 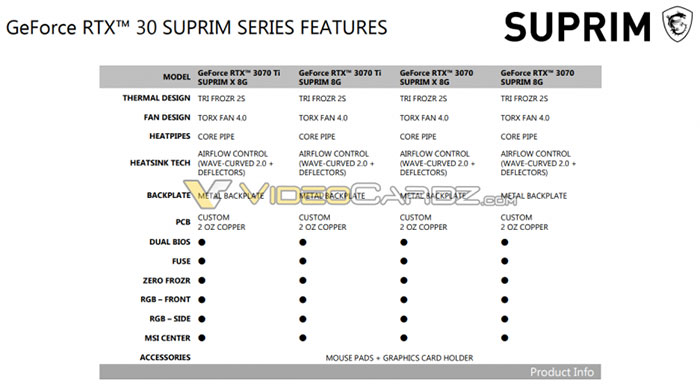 The GeForce RTX 3070 Ti is tipped to come with 6,144 CUDA cores, thus nestling between the RTX 3080 (8,704 cores) and RTX 3070 (5,888 cores), while obviously being nearer the latter. As the RTX 3070 Ti has just ~4 per cent more CUDA cores than the vanilla version of this GPU, the memory has been upgraded to 19Gbps GDDR6 (from 14Gbps) which might have helped make enough room to justify its existence if the markets were behaving normally at this time.

According to the source, the above graphics cards will be announced on Saturday, 29th May, which is an odd choice of date from Nvidia.

All images from VideoCardz