las vegas-based stream it, inc. has unveiled the cyberlandr — a camper/overlander for the tesla cybertruck. this incredible camping alternative allows users to take a kitchen, living room, bedroom, bathroom and office anywhere and everywhere, resulting in the ultimate wilderness and urban adventures.

the tesla cybertruck features a silhouette the cyberlandr wants to highlight. that’s why when stowed, the camper disappears entirely within the bed of the truck, allowing the tonneau cover and tailgate to close. this creates a low center of gravity, zero aerodynamic drag, and minimal effect on rage. ultimately, this allows users to take the cyberlandr through areas they would avoid with most overloading trailers. even if equipped with a trailer, the overall size is still reasonable, allowing it to fit in normal parking spaces and making sure it doesn’t obstruct outward visibility.

the cyberlandr’s aesthetics, features, and accompanying app are all designed to complement and enhance the tesla cybertruck experience. for example, the cyberlandr’s marble-look porcelain kitchen countertop mirrors the cybertruck’s dashboard. And just like the cybertruck, cyberlandr has voice activated automation to control features like lights, its electrochromic dimming windows, and even the faucet. users can also use the app to control these features, to deploy and stow cyberlandr, and to view the 360-degree surround surveillance system. 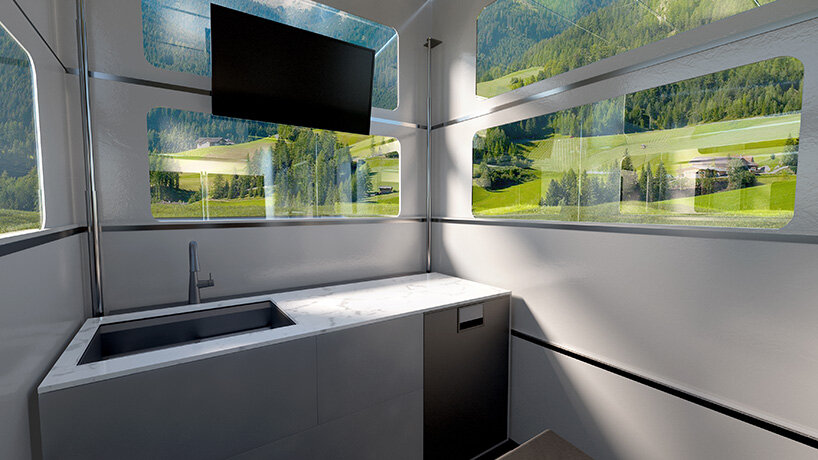 the recirculating shower means users won’t run out of hot water while radiant heated floors keeps a comfortable temperature while its cold outside. the dry fish toilet means there’s never a black-water tank or cassette to empty. and because the cyberlandr is all electric, you never need to run around town to buy propane, gas, or diesel fuel – a simple charge is all it takes. 500 Watts of included solar panels help replenish the cybertruck’s batteries.

Boeing News – What Will Happen To Aircraft Stored Due To The Pandemic?

Tesla News – Elon Musk on SNL: Can the Tesla CEO be funny?