Investors looking for stocks with explosive growth potential sometimes seek out companies in sectors like biotech, where the outcomes can be almost binary. In the realm of cutting-edge healthcare, each hopeful new product or treatment will either be a success that could lead to monster profits, or fail to pass regulatory muster and earn nothing. Enough failures, and such companies’ stock prices can go to zero.

These three companies, on the other hand, have massive growth opportunities, but much less of that all-or-nothing risk. They either have successful businesses already, or are quickly growing in sectors that seem to have unstoppable momentum.

Some of the catalysts that will be driving their share prices are more short term, while others will likely take years to play out. But there are good reasons to expect that electric vehicle (EV) maker NIO (NYSE:NIO), EV charging network leader ChargePoint Holdings (NYSE:CHPT), and North American steelmaker Nucor (NYSE:NUE) could produce significant gains for shareholders in the years ahead.

The NIO ET7 electric luxury sedan is expected to be available starting in 2022. Image source: NIO.

NIO: A massive and growing market

As recently as early 2020, Shanghai-based NIO was flirting with bankruptcy. But a push by the Chinese government to accelerate the growth of that country’s EV industry contributed to a strong surge in sales. The company more than doubled its vehicle deliveries in 2020 compared to 2019, though that still only amounted to about 44,000 electric cars. Its production growth rate is accelerating, however. In the first quarter of 2021, deliveries soared by more than 400% year over year to over 20,000.

EV sales in China surpassed 1 million in 2020, and the government’s goal is to expand that annual number to 5 million by 2025. According to a forecast from sector research organization BloombergNEF, China’s EV sales could reach 10 million by 2030, and approach 20 million by 2040.

The opportunity that degree of market growth represents hasn’t been lost on investors. NIO stock is up more than 1,000% since its period of financial struggles a year ago. But its shares are also down by more than 40% from their recent peak. NIO‘s current $60 billion market capitalization is still pricing in an enormous amount of anticipated growth.

The automaker will begin selling its ET7 luxury sedan early next year, and it recently announced plans for a new production factory. Its unique battery-swap subscription service, and an agreement with Ford (NYSE:F) to allow Chinese Mach E buyers to use NIO‘s charging network, will also add to its revenue streams. It certainly won’t happen overnight, but the stock has the potential to advance well beyond its current level if the company executes. 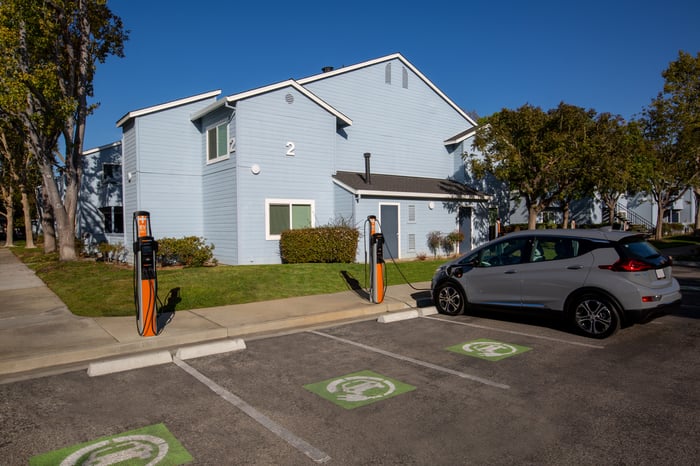 ChargePoint: A network of vital infrastructure

With more than 70% market share, ChargePoint is the North American leader in Level 2 charging networks, which use 240-volt power. ChargePoint is rapidly growing its charging station network in the U.S. and expanding in Europe. It expects sales of its charging ports to grow by seven times through 2026. Its comprehensive network of offerings also includes more than 2,000 publicly available fast charging stations. Its suite of products caters to the needs of EV fleet owners, parking operators, and consumers, as well as corporations and municipalities.

It began trading publicly recently through a merger with a special purpose acquisition company (SPAC). However, unlike many of the startups that have followed that path in the past year, ChargePoint is already bringing in significant revenue: $146 million in its fiscal 2021, which ended Jan. 31.

President Biden‘s proposed $2 trillion infrastructure package includes about $175 billion dedicated to the EV sector. This includes installing 500,000 charging stations and electrifying bus fleets and government vehicle fleets. But while ChargePoint supports the infrastructure bill, and would almost certainly be a beneficiary of its passage, the company doesn’t need that catalyst for its charging network to grow rapidly.

Major automakers are on the verge of greatly expanding their EV offerings, and some, including Ford and Volvo Car Group, have committed to going virtually all-electric by 2030. General Motors ((NYSE:GM)) is targeting 2035. The need for much more EV charging infrastructure is clearly coming, and ChargePoint is in a prime position to supply it.

Nucor: New records on the horizon

Leading steelmaker Nucor released an unusual note to investors in early February, predicting it would deliver record quarterly earnings in the first quarter. It later followed that with guidance that it was likely to set another new record in the second quarter. Specifically, the company said: “Nucor has elected to provide this update due to what it sees as an unusually large gap between its internal forecast and the current mean estimate for its first quarter earnings.”

There are several factors driving that outperformance, with a confluence of pandemic-related supply-and-demand impacts resulting in significantly higher product pricing. In fact, the current prices of certain steel products are twice what they have averaged for most of the past seven years. Nucor will be one of the biggest beneficiaries of this as one of the top two low-cost steel producers in the U.S.

Shares of Nucor have gained about 45% since the initial alert in February, so much of what is known has been priced into the stock. It’s also likely that steel pricing will moderate. Global supply is currently strained due to high demand, but eventually, the arrival of more supply from cheaper foreign producers will drive prices down, or else some users will more aggressively seek alternative materials.

But based on what Nucor has already told investors, there is still room for significant growth in the stock price. If management’s current predictions materialize, Nucor will earn around $2 billion in the first half of 2021. Even if earnings are cut in half in the second half of the year, full-year net income of $3 billion would give it a forward price-to-earnings (P/E) ratio of under 8. For a stable, dividend-paying company like Nucor, that would qualify as explosive short-term growth.

Fintech News Today – Would Fintech Companies Be in Trouble During a Recession?

NIO Stock News – The Death Of Car Ownership: This $30 Trillion Trend Could Kill The Auto Industry

JPMorgan Chase - Would Fintech Companies Be in Trouble During a Recession?