NYSE:NIO is hitting hyper drive as of late, as the stock continues to extend its momentum back towards the $50 price level. On Thursday, Nio gained a further 5.20% to close the trading session at $47.36, as growth stocks bounced back to life following the Federal Reserve keeping interest rates low for the time being. Nio has made a series of positive announcements that has turned the sentiment on the Chinese EV maker to strongly bullish, as shares retrace back towards their all-time high price levels.

Yet another bullish catalyst was released from Nio’s camp on Thursday, as the company announced it will officially be looking to enter the hotly contested German market by 2022. Earlier this week Nio received authorization to manufacture and sell its vehicles across the European Union, and Germany is a logical next target after Nio begins selling in Norway this September. Nio also reported its first highway battery swap station in China, a sign that it is ready to rapidly build up its charging infrastructure in its domestic market. 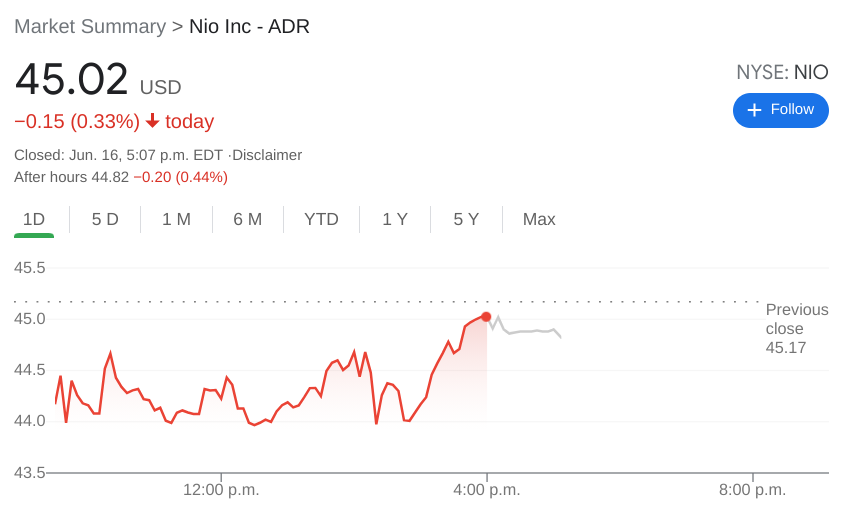 The Chinese EV sector was up all around on Thursday, as lidar maker Innovusion reported that its sensors would be installed on Nio’s vehicles, which caused speculation that the Chinese autonomous driving market was heating back up. XPeng ((NYSE:XPEV)) is also testing out autonomous driving and reported that its P7 Valet Parking Assist function is one step closer to ‘full autonomous parking’. Not to be outdone, Li Auto ((NASDAQ:LI)) is rumored to be hiring a plant manager in Beijing where the company is expected to be constructing large-scale factory.

Financial Market – How market research reveals what you really think

Is NIO (NIO) Outperforming Other Auto-Tires-Trucks Stocks This Year?

NIO Stock Increased 4.83%: Why It Happened

Nio Stock 4.83% Up Before The Weekend | Fintech Zoom

Nio Stock 4.83% Up Before The Weekend

American Express Stock - Matthew Wolff opens with 1-under 70 at U.S. Open in return from two-month break