EV stocks were mostly down for the week ending Sept. 10, excluding Tesla, Inc. (NASDAQ: (TSLA)). Shares of the EV giant saw a nice bump up in the middle of the week before squandering most of the gains, and yet ending the week higher.

Here are the key developments in the EV space this week:

Tesla In The News On Laser Beam Wipers, Energy Trading, Model S Plaid: Even as Tesla bull Cathie Wood’s Ark Invest ETFs sold part of its Tesla Holdings, valued at around $139 million, the company had several other positive developments to flaunt during the week.

Tesla has received a U.S. patent for the use of laser beams as windshield wipers and also for cleaning debris from solar panels and tiles on the roof.

In another development, Elon Musk showed off record speed statistics for its Model S Plaid model. In a tweet, Musk said the vehicle set an official world speed record for a production EV at Nürburgring. The company began delivering the model in early June.

Reports also suggested that Tesla is building a team of energy traders with its Auto bidder platform, a real time trading and control platform for energy assets such as Tesla‘s Powerpacks, Powerwalls and Megapacks.

Tesla is finding redemption in China, as sales recovered in August following a slump in July.

Nio Surprises With an Equity Offering: Chinese EV maker Nio, Inc. (NYSE: NIO) filed for offering up to $2 billion of ADSs to fuel its growth plans. The company chose the “at-the-market” offering route that allows selling shares in the open market over time.

In other key developments, it was revealed that the robotaxi fleet Intel, Inc. (NASDAQ: INTC)’s MobilEye subsidiary is planning to launch in Germany will use Nio‘s ES8. At the IAA Mobility event in Munich, Nio for the first time showcased its yet-to-be launched ET7 in Europe and also confirmed a German foray in 2022.

XPeng to Launch P5 Next Week: XPeng, Inc. ((NYSE: XPEV)) announced that its third production model, the XPeng P5 smart family sedan, will launch in the Chinese market on Sept. 15. Deliveries to customers will begin in October.

Apple to Grind it Out Alone: A report in a local Korean news media suggested Apple, Inc. (NASDAQ: AAPL) is planning to develop its self-driving car alone in order to avoid delays. The company is reportedly close to finalizing its suppliers for the Apple Car project.

Toyota’s Big Battery Ambitions: Japanese auto giant Toyota Motor Corporation (NYSE: TM), which is late to the EV party, said it plans to invest around $13.6 billion in battery tech over the next decade, according to reports. Of this, the company plans to spend around $9 billion on battery production. The company is aiming to eventually produce about 250 Gigawatt-hour of batteries.

The company said its solid-state lithium-metal platform is cathode-agnostic and eliminates the need for an anode. If matched with the iron and phosphorus cathode in LFP cells, it can make them lighter and increase their energy density by a wide margin, the company said.

Hyzon Gets Bullish Recommendation: Hyzon Motors, Inc. (NASDAQ: HYZN) was initiated with an Overweight rating and a year-end 2022 price target of $18 by JPMorgan analyst Bill Peterson.

EV Stock Performances for The Week: 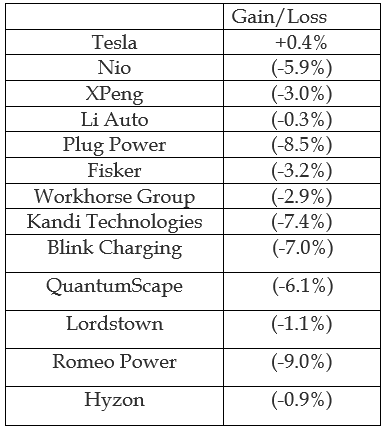