We’ve all heard the mantra “work smarter, not harder.” But automation and machine learning are redefining just how “smart” businesses can be. Many relationship-based practices are being upended as technology gives the companies that are quick to adopt it a leg up on the competition.

One of the companies at the center of this transformation is ZoomInfo Technologies (NASDAQ:ZI). It offers a cloud platform that aggregates data to supercharge sales reps in their never-ending quest to hit their numbers. I just added shares to my own portfolio. Here are five reasons why. 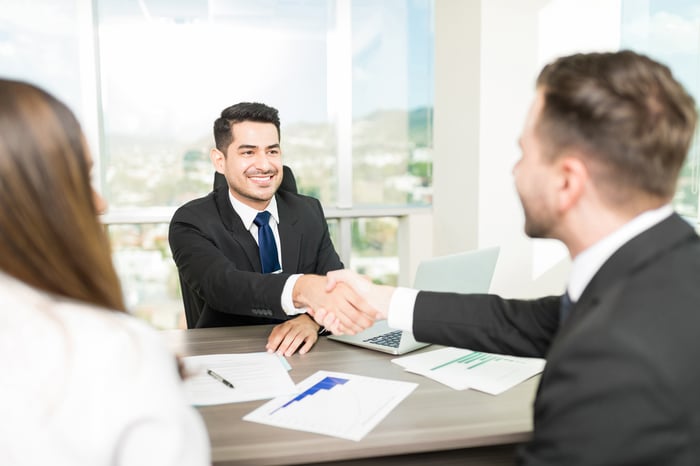 Henry Schuck founded a sales intelligence organization called DiscoverOrg in 2007 and acquired ZoomInfo in 2019. It’s a software platform that helps sales and marketing people at one company find and connect with likely customers. Schuck has been in the sales intelligence business since joining a small company in 2001 that offered access to a database of information technology decision makers. Twenty years later, ZoomInfo is a lot more than a digitized rolodex.

Walking through the features of the platform highlights just how smart selling can be. From a salesperson’s perspective, ZoomInfo helps identify which companies are most likely to be buyers of your product or service. It also identifies the key decision makers at those businesses, including their contact information. Signals around potential purchase intent are also available.

It helps answer the key questions: Did the person just get funding? Is there a new executive in the role? Is the company opening a new location in the area? And the list goes on. ZoomInfo not only arms a salesperson with this information, it helps them prioritize it for hundreds or thousands of accounts. You couldn’t do that in the old days.

The company has been successful in rolling up similar businesses through the years. Not only did Schuck acquire the business he worked at in 2001, he purchased another competitor in 2017. In 2019, he raised funds to buy ZoomInfo and subsequently adopted the name for the entire company. More recently, the acquisition strategy has been to bolster its artificial intelligence capability.

ZoomInfo announced the purchases of Chorus.ai and Insent.ai in the most recent quarter. The first offers something called conversation intelligence. It records calls and helps sales teams learn how to get better results through coaching. Insent.ai is an application that identifies visitors to a website and uses artificial intelligence to route the sales lead into a real-time conversation. With both deals ZoomInfo is staying true to its core — helping supercharge sales.

Like many cloud-based companies serving the needs of businesses, ZoomInfo has put up some incredible growth numbers. And it is maintaining the pace. The company posted second-quarter results in early August. Revenue grew 57% year over year and 13.5% over the first quarter. That was an acceleration over the previous quarter when those growth numbers were 53% and 9.7%, respectively.

It’s also obvious the company is scaling. Operating margin was 21% in the most recent six months compared to 12.3% in 2019. It means as the company is growing it’s not having to spend as much money per dollar of revenue generated. And there is a lot more revenue to gain.

ZoomInfo has more than 20,000 customers — 1,100 of them with more than $100,000 of annual contract value — and it publishes information on roughly 100 million companies and 130 million business professionals. It’s an incredible repository and it is only scratching the surface.

As ZoomInfo adds companies and data to its platform, the sales signals it is providing get better and better. That makes the product even more powerful. It’s a network effect that isn’t obvious at first. It may be about to take that to a whole other level. In May, the company announced it would join Snowflake‘s data marketplace. Customers will now be able to use Snowflake’s platform to integrate the sales intelligence ZoomInfo offers.

There is one more reason I bought shares in ZoomInfo. While the company is growing fast, has high demand for its product, and is already generating an operating profit, it wasn’t until it passed the final test that I purchased shares. It has to do with leadership.

Schuck is energetic, compelling, and seems as transparent as CEOs come. Whether it’s discussing his inability to build a great engineering team at DiscoverOrg or the fear of having all of your net worth tied up in one company, he strikes me as someone who doesn’t bother putting up a facade. When you add up all the measurable reasons ZoomInfo looks like a great company, someone I trust at the helm is the cherry on top.

ROKU Stock May Have a Little Further to Fall, But It’s Still a Growth Stock

Elon Musk and Dogecoin spiked demand for Shiba Inu dogs, but not good news for tenderloins