Apple Inc. (NASDAQ:AAPL), Boeing Company (The) (NYSE:BA) – Markets Shift To Risk-Off After Fed Meeting, And Ahead Of Apple, Tesla Earnings

“Risk-off” resurfaced in a major way Wednesday, sending volatility soaring and stocks tumbling as the Fed meeting ended and investors prepared for a triumvirate of Tech earnings. Concerns about the slow process of vaccination appeared to hurt the market, along with cautious words from the Fed.

Wednesday’s losses for the major indices were the worst in three months, and banished the S&P 500 Index (SPX) into negative territory for 2021. Small-caps and the Dow Jones Industrial Average ($DJI) also took a hit, but the broader SPX fell more sharply.

A Tough Day At The (Home) Office

Fed Chairman Jerome Powell said in his post-meeting press conference that it would be a long road to recovery, and that appeared to add to the late selling pressure on Wall Street. Selling intensified toward the close as the SPX plunged more than 2.5% to below what some analysts had seen as a technical support level that stood near 3750. Meanwhile, the 10-year Treasury yield sank to just above 1% by late in the session. It was at nearly 1.2% earlier this month.

Weakness in the 10-year yield put pressure on the Financial sector, and so-called “defensive” sectors, along with bonds, saw more buying interest. There had been this belief that a vaccine would be a magic potion that would sort of pick everything up, but Powell put things in more realistic terms. It takes a while to recover, and that’s why rates remain unchanged and the Fed’s bond-buying program continues.

Profit taking could be another factor in the selling, since major indices had all posted record highs this month. All this came ahead of Apple Inc (NASDAQ: AAPL), Tesla Inc (NASDAQ: (TSLA)), and Facebook, Inc. (NASDAQ: FB) earnings after the close.

The Cboe Volatility Index (VIX), sometimes seen as a measure of fear in the market, skyrocketed around 30% to above 30 after being below 22 last week. It’s the first time it’s taken out the 30 barrier since early November.

A prolonged move above 30 in VIX or below 1% in the 10-year yield would present a possible crossroads for either of those vectors. Going through one or both of those lines could draw more sellers into stocks, or it could indicate to investors that maybe the selloff has gone far enough.

Wild activity around some “short squeezes” this week in stocks like GameStop Corp. ((NYSE: GM)E) might be another factor today. For some investors, it might signal a little froth in the market overall.

As noted here a couple days ago, it’s absolutely normal for the major indices to have two or three 5% drops and at least one correction of 10% every year, and we haven’t seen anything close to that since last September when the SPX fell about 9.6% over a few weeks. It would probably be less normal if things just kept going up without stopping, the way they had been since around early November.

With investors shying away from risk on Wednesday, and some of the more defensive sectors like Staples and Real Estate did a little better than the overall indices. It’s also interesting to note that earnings season has been pretty decent so far, and the Tech sector was one of the best performers today on a huge day for earnings in that sector. Microsoft Corporation (NASDAQ: (MSFT)) results yesterday looked pretty stellar.

Not too surprisingly, the Federal Open Market Committee (FOMC) signaled miniscule interest rates are here to stay as the U.S. economy continues to tiptoe on thin ice.

What’s more, the Fed also tried to provide reassurance that the “T” word, as in taper, isn’t yet in the Central Bank’s vocabulary. We’re still far below the Fed’s dual mandate of 2% inflation and maximum employment (see more below).

The Fed left the policy unchanged with the Fed funds interest rates at 0–0.25%, where it’s been since the onset of the COVID-19 pandemic last March. Staying steady offered reassurance the Fed will continue to support the economy’s recovery with low rates and bond purchases that won’t let up in the near future.

Today’s statement underscored how the balancing act is still being squared and any changes to the Fed’s dovish stance aren’t coming any time soon. The policy statement repeated words we’ve heard before: letting inflation run “moderately” ahead of the 2% goal to battle unemployment.

One interesting change was that the Fed left out some references to “timing” from its statement.

After its previous meeting in December, the Fed said the health crisis “will continue to weigh on economic activity, employment and inflation in the near term and poses considerable risks to the economic outlook over the medium term.”

Today’s statement left out the words “near term” and “medium term” from that phrase. And instead of “will continue,” the statement says, “continues.”

In Powell’s press conference after the meeting, he said they took the word “medium term” out because the issues the economy faces like vaccinations and new cases are all happening now. The words “medium term,” he said, is more a description of what he called “long-term scarring” to the economy.

The Fed added that the path of the economy will depend significantly on the course of the virus, as it’s said in the past, but with the new phrase “including progress on vaccinations,” added to that sentence. Like the rest of us, the Fed has a close eye on vaccine progress and can only be a spectator to that particular battle.

As a reminder, the Fed’s monthly bond purchases have been coming in two forms: $80 billion in Treasury securities and $40 billion in mortgage-backed debt. Powell said there’s no plan to change either anytime soon, and that if the Fed does decide to go the tapering direction, it will give investors plenty of warning and do any tapering very gradually. The Fed did this successfully after the 2008 financial crisis ended and has learned from that experience, he added.

Powell acknowledged that inflation could potentially tick up a couple times in the near future. First, when the economy “laps” the steep drop in prices seen last March and April, and then later in the year when presumably everything starts to open up. Both of these inflation events will probably be “transient,” Powell said, and will “likely pass.” He said investors can expect the Fed to “wait and see and not react” to any inflation from these events. The Fed remains committed to getting inflation back to its 2% goal, and said the whole focus in the market on a possible taper “is premature.”

In his press conference, Powell addressed the recent jump in jobless claims, the high number of people who remain unemployed due to the pandemic, and the slump in service sector jobs like ones at restaurants and hotels. 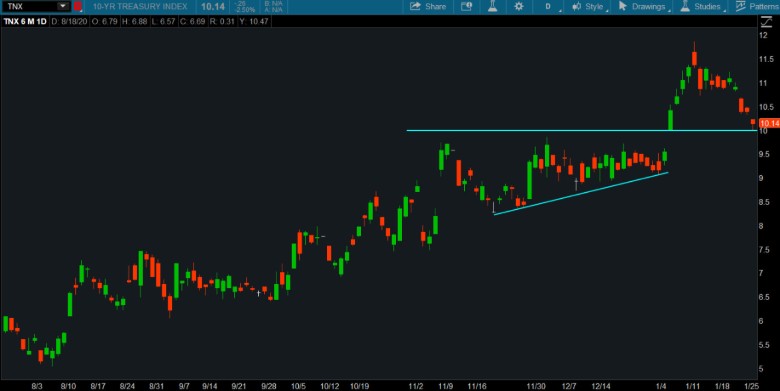 CHART OF THE DAY: BOUNCING OFF SUPPORT. After finally breaking out above 1% which was a resistance level of an ascending triangle pattern (blue lines), the 10-year Treasury Index (TNX—candlestick) revisited that level today. Today’s action shows it bouncing off that 1% level so it could now be acting as a support level. price action around that level could be something to keep an eye on. Data source: Cboe Global Markets. Chart source: The thinkorswim® platform from TD Ameritrade. For illustrative purposes only. Past performance does not guarantee future results.

Quantitative Easing Still in Play: What might have provided a more significant sigh of relief is the Fed holding to what Evercore ISI’s Krishna Guha called the “posture of strategic patience” to allow the economy—and the inflation expectations—to improve on a broader basis.

Economists were twittering recently about potential tapering moves may be coming but the Fed, maybe fearful of reincarnation of the “temper tantrums” of the financial crisis, tried to stamp that out.  Remember it was fewer than two weeks ago that Powell said, “Now is not the time to be talking about exit,” in a virtual speech.

It was just last month that the FOMC promised to continue its $120 billion monthly asset buying binge until “substantial further progress has been made toward the committee’s maximum employment and price-stability goals.” Powell repeated today that any talk about exiting would be “premature” and that “we’re focused on finishing the job we’re doing.”

Call the Schedule Makers: In a way, it’s too bad the Fed finished its meeting today instead of waiting a couple days. That’s because Friday morning brings what analysts say is the Fed’s most trusted inflation tool, Personal Consumption Expenditure (PCE) prices. By having to hold the meeting two days before that, the Fed is arguably assessing things without a full plate of data, but that’s the way the schedules lined up. You don’t always get to play at home on a sunny day, so to speak. As it is, PCE prices didn’t budge in November, the latest data we have. Both headline and “core” PCE rose exactly 0% that month.

Looking ahead to Friday’s PCE price data for December, analysts expect a little more movement, but not much. Consensus is for a 0.3% bump from the previous month for headline PCE, and a 0.1% rise for core PCE, according to research firm Briefing.com. The year-over-year number could be more crucial, since the Fed looks at this to see if inflation is approaching its longstanding 2% goal.  In November, core PCE rose 1.4% year-over-year, unchanged from October. Keep an eye on the report’s personal savings number, too, which has been elevated lately at 12.9% of disposable income in November. The savings rate could help investors get some insight into whether people are more prone to spending their stimulus money or socking it away when it arrives.

They Put the Band Back Together: In his first comments since his predecessor Janet Yellen was confirmed as Treasury secretary, Federal Reserve Chair Jerome Powell said he looks forward to working with her but that reporters should be patient with him if he sometimes mistakenly refers to her as “chair” rather than “secretary.” That’s a reference to Yellen serving as Fed chair until 2018, right before Powell took over.

The two former colleagues are long known to have a history of working well together and their partnership during this latest crisis appears to be back on track. Overall, that could be a good thing. “Their shared experience and economic views set the stage for the closest working relationship between their institutions since the 2008 financial crisis,” the Wall Street Journal said recently.

Obviously there was Fed/Treasury coordination when Steve Mnuchin was Treasury secretary last year and the pandemic first unhinged the economy. But in the waning days of the Trump administration, Mnuchin and Powell didn’t appear to be on the same page as Mnuchin pulled the plug on emergency-lending programs.

Yellen argued in her confirmation hearings the government needs to “act big” in its efforts to push stimulus and President Biden’s $1.9 trillion spending package. That should square well with Powell, who has warned against relying too much just on Fed policy to cure the economy’s woes.  “We’ll be collaborative and work together,” Powell said when a reporter asked about Yellen during his press conference today. “We’ll stay in our lanes.”

NYSE News Today – Does Tyler Technologies (NYSE:TYL) Deserve A Spot On Your Watchlist?

NYSE News Today – How Much Of Palantir Technologies Inc. (NYSE:PLTR) Do Insiders Own?

NYSE News Today – This Day In Market History: NYSE Shuts Down For 11 Days In 1933

NYSE News Today – Based On Its ROE, Is Cantel Medical Corp. (NYSE:CMD) A High Quality Stock?