MarineMax, Inc. (NYSE:HZO) CEO W Brett Mcgill sold 10,000 shares of the business’s stock in a transaction that occurred on Friday, May 7th. The stock was sold at an average price of $65.09, for a total transaction of $650,900.00. Following the completion of the sale, the chief executive officer now directly owns 50,044 shares of the company’s stock, valued at $3,257,363.96. The transaction was disclosed in a legal filing with the Securities & Exchange Commission, which can be accessed through this link.

MarineMax (NYSE:HZO) last posted its quarterly earnings results on Thursday, April 22nd. The specialty retailer reported $1.69 earnings per share for the quarter, topping the consensus estimate of $0.73 by $0.96. The company had revenue of $523.10 million during the quarter, compared to the consensus estimate of $438.23 million. MarineMax had a return on equity of 18.47% and a net margin of 4.94%. The firm’s quarterly revenue was up 69.6% compared to the same quarter last year. During the same quarter in the prior year, the company earned $0.23 EPS. On average, research analysts expect that MarineMax, Inc. will post 3.87 EPS for the current year. 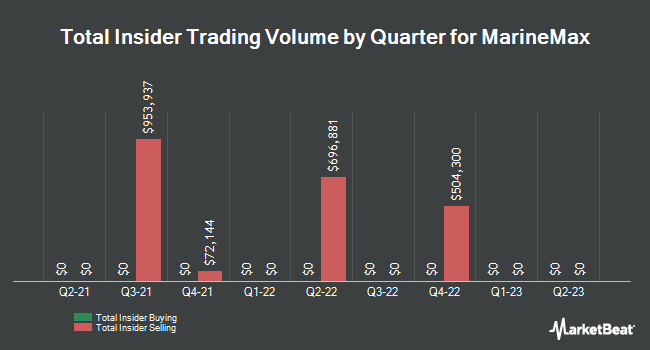 NYSE News Today – We Wouldn't Be Too Quick To Buy Douglas Dynamics, Inc. (NYSE:PLOW) Before It Goes Ex-Dividend

NYSE News Today – Why You Might Be Interested In Intercontinental Exchange, Inc. (NYSE:ICE) For Its Upcoming Dividend