Oil prices have been red hot this year. West Texas intermediate, the primary U.S. oil price benchmark, has rallied about 30%, pushing it above $60 a barrel. That’s driven up most oil stocks, with the average one in the S&P Oil & Gas Exploration & Production ETF — an exchange-traded fund (ETF) that holds 50 oil stocks — rallying more than 30% on the year.

Some oil stocks rocketed higher, including Diamondback Energy (NASDAQ:FANG), which has rallied about 60% this year. Here’s a look at whether there’s any gas left in the tank or if it’s running on fumes.

Diamondback Energy entered last year’s oil market downturn in a position of strength. It had a strong balance sheet and low-cost operations, enabling it to navigate the turbulent times relatively well. Meanwhile, its strong financial profile allowed it to strike when two acquisition opportunities arose late last year. It bought Guidon Energy in an $862 million deal that closed in February and recently wrapped up its $2.15 billion purchase of rival QEP Resources.

Those deals have it on track to produce 360,000 to 370,000 barrels of oil equivalent per day (BOE/D) this year, up from slightly more than 300,000 BOE/D last year. It can produce at that level, which is flat from the combined company’s 2020 exit rate while spending 10% less capital overall. It should thus generate significant free cash flow this year. At $60 oil, Diamondback could produce more than $1.75 billion in excess cash, enabling it to pay its 2.1%-yielding dividend (roughly $250 million) and pay down a sizable amount of debt.

Its free cash flow could be even higher in the future even if oil prices don’t improve too much more because it expects to capture cost savings from its two mergers. It anticipates that the QEP deal alone to save it $60 million to $80 million per year, and that was before a recent debt refinancing will reduce its interest expenses by $40 million. Meanwhile, interest expenses will come down even more as it uses its excess cash to repay debt, further improving its cost structure and future free cash flow. 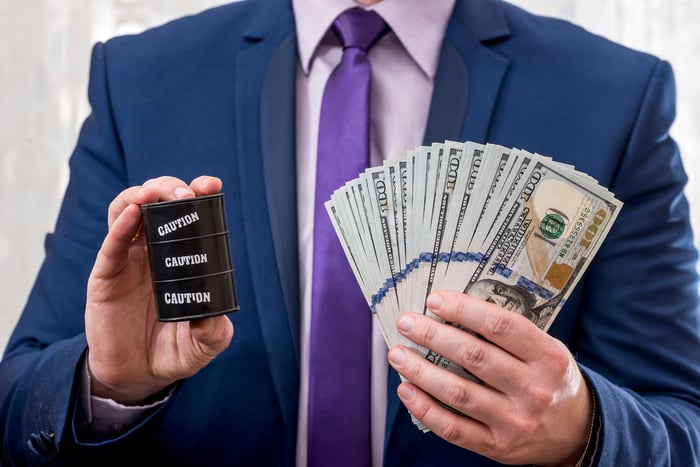 One of the biggest issues with buying Diamondback Energy stock, or any oil stock for that matter, is the sector’s uncertain future owing to the rapid acceleration of renewable energy development. Governments and companies are on track to invest trillions of dollars over the next few decades to transition the global economy’s primary fuel source from fossil fuels to lower-carbon alternatives, so demand for oil and gas could fall in the future, which would affect the ability of companies like Diamondback Energy to grow their earnings and create shareholder value.

Diamondback Energy is working to become part of the solution instead of contributing to this problem by reducing greenhouse gas emissions and aiming to produce net-zero oil. The company initially plans to purchase carbon offset credits to offset the emissions it produces until it can invest in income-generating projects that will directly offset its carbon emissions. These investments will add to its costs, which could affect its returns and cash flow in the future, especially if oil prices weaken. Meanwhile, there’s no guarantee there will be a long-term market for net-zero oil if companies can commercialize emissions-free alternatives like green hydrogen. That uncertainty on the future of the oil market could keep a lid on crude oil prices and Diamondback Energy’s stock price since it’s unclear if it will grow its production in the future outside of making additional acquisitions.

It’s hard to get too excited by Diamondback Energy stock

Diamondback Energy exited last year’s oil market downturn in a stronger position than it entered by taking advantage of the opportunity and acquiring Guidon and QEP Resources. It should therefore produce more free cash flow in the coming years than it would have as a stand-alone entity as it integrates those businesses. However, it’s unclear how much more upside it has, given its outperformance compared with other oil stocks this year and the sector’s long-term headwinds. That means t’s not the most compelling buying opportunity in the oil patch these days unless an investor is unabashedly bullish on crude prices.