“It was a beautiful place. I told myself I could rest here, sleep here and forget about my work.” If only that were true

I’ve been waiting for Alan Wake Remastered for a long time as it has always been a game that holds a special place in my heart. Remastering a game from 2010 has its perks; it’s an excellent way for people who missed out on it initially to finally get a chance to play it, especially when that game was an Xbox 360 exclusive at that time. For people that have already played it, it is a great excuse to give it another go. However, remasters aren’t remakes, and no matter how many fresh coats of paint you throw over something, it does little to mitigate the passage of time. I want to take this opportunity to say that I did enjoy Alan Wake: Remastered, but I would be lying if I said it was perfect. Sometimes the past truly comes back to haunt you.

I was lucky (or unfortunate enough, depending on who you ask) to have played Alan Wake when it was initially released in 2010. Now you’re probably wondering why I said ‘unfortunate,’ well, that’s because, at the time, I was around 13 or 14 years old and also a massive coward. While I would like to consider myself older and braver now, I will admit at the time of the original release of Alan Wake; I was terrified by everything that the game threw at me. Nowadays, I don’t find Alan Wake as scary as I did back then, it’s still a very tense and thrilling experience, and due to this new outlook, it almost makes me feel as if I am experiencing the game for the first time again.

For those of you that haven’t heard of or played Alan Wake before, the basics of the story are as follows (No Spoilers, I promise); our main character and Stephen King stand-in Alan Wake is a famous in-universe writer. This will become very apparent to you within seconds of loading the game, as Alan introduces himself as ‘My name is Alan Wake, I’m a writer’. After experiencing a bout of writer’s block that has lasted two years, Alan and his wife Alice head to a small town called Bright Falls for a bit of relaxation and recuperation. While Alan intends to enjoy a short holiday, Alice and his agent Barry hope that the scenic location will help clear his writer’s block, allowing Alan to start writing again. Upon finding out about this ulterior motive, Alice and Alan have an argument resulting in Alan leaving the cabin they’re staying in to get some ‘fresh air.’ Before he barely makes it a few steps outside, the lights go out, and he hears Alice screaming. Remembering that Alice has a crippling fear of the dark, Alan sprints back to the cabin to help, only to see that the balcony is broken, and he hears a splash in the waters below, silencing the screams. Without hesitation, Alan dives into the murky waters of the lake to rescue his wife; when Alan hits the water, he awakes to find himself behind the wheel of a crashed car in the woods. Dazed and confused, Alan stumbles out of the vehicle to find Alice nowhere to be seen and his phone dead. As he gazes through the darkness of the woods, he can see the lights of a nearby gas station shining back at him. Out of options and in desperate need of help, Alan takes off through the woods towards the gas station.

As Alan stumbles through the woods, he comes across a manuscript page lying on the ground titled ‘Departure, by Alan Wake’; not only does he not remember writing this new manuscript, but it also seems to have the strange ability to predict the future. In addition to this seemingly magical manuscript scattered around Bright Falls, Alan is also being preyed upon by town members shrouded in shadow; these ‘Taken’ as they are later referred to can only be felled once the darkness surrounds them has been burned away by light. Armed with a flashlight (no longer sponsored by Energiser) and a revolver, Alan must rescue his wife and unravel the mystery of the manuscript in the hopes that it has a happy ending. 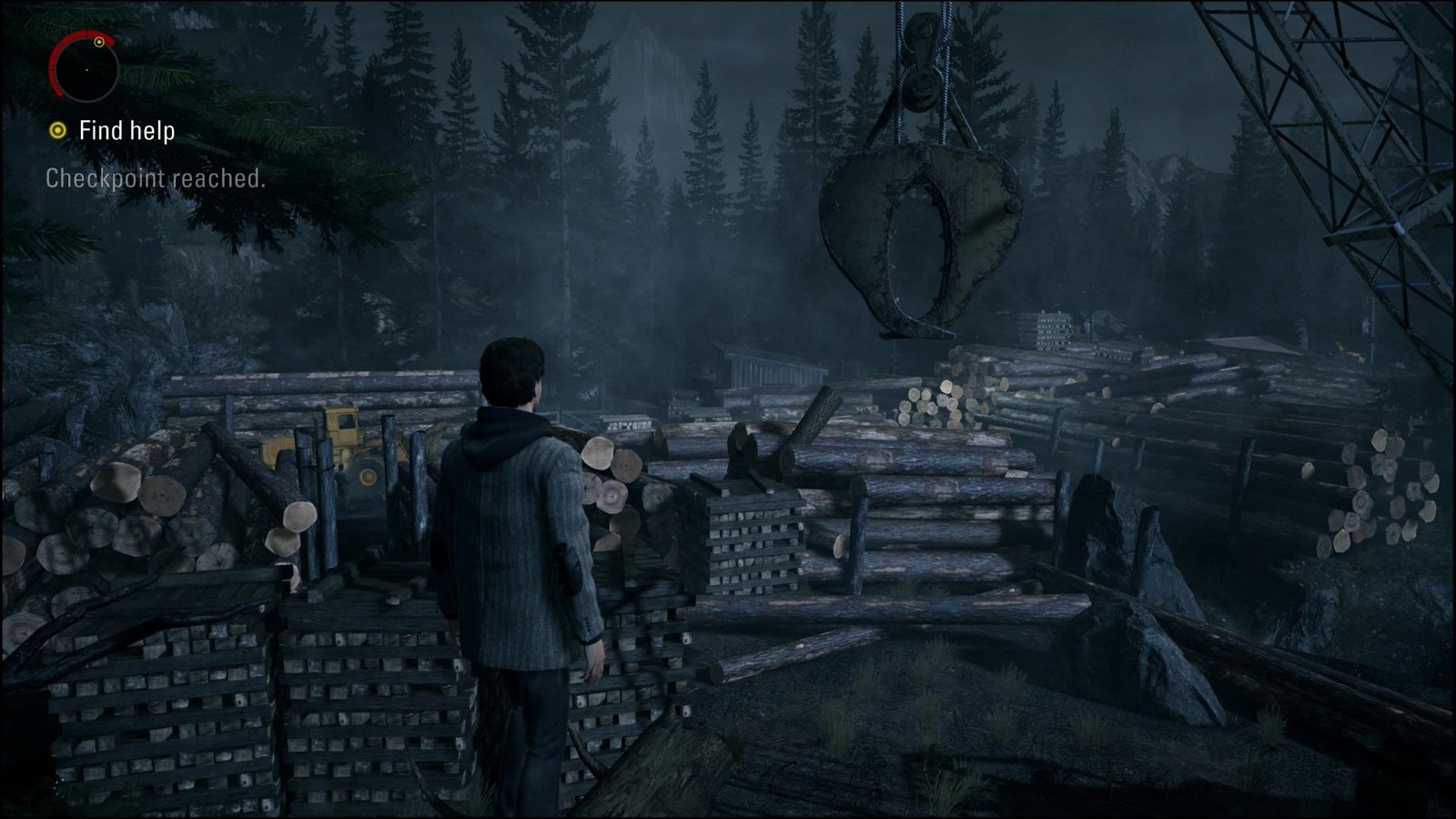 Even when I played Alan Wake originally, I felt that finding the pages of the manuscript was a great way to build tension, it’s easy to think that knowing what was going to happen would diminish the scares to come, but this limited amount of precognition actually does wonders for the narrative tension as you scramble to find all of the prophetic pages hidden in Bright Falls because while the true essence of horror is the fear of the unknown, the true essence of tension is the fear of what is going to come.

Alan Wake is a game that wears its inspirations on its sleeve. While the most obvious inspiration is that of the works of Stephen King, you’ll also notice some inspiration from the campy horror movies and shows of yesteryear, most namely The Twilight Zone. Remedy Entertainment has always been noticeably influenced by old TV and movie styles. For example Max Payne very much leans on the Neo-Noir trope of an ex-cop/ detective who must operate outside the law to get justice for his loved ones as they stumble upon a more extensive more sinister plot. In referencing these old styles and tropes, Remedy games have always had a certain element of style to them that feels rather unique in the world of gaming, and Alan Wake is no exception. In fact, I still believe it is one of Remedy’s best titles to date. 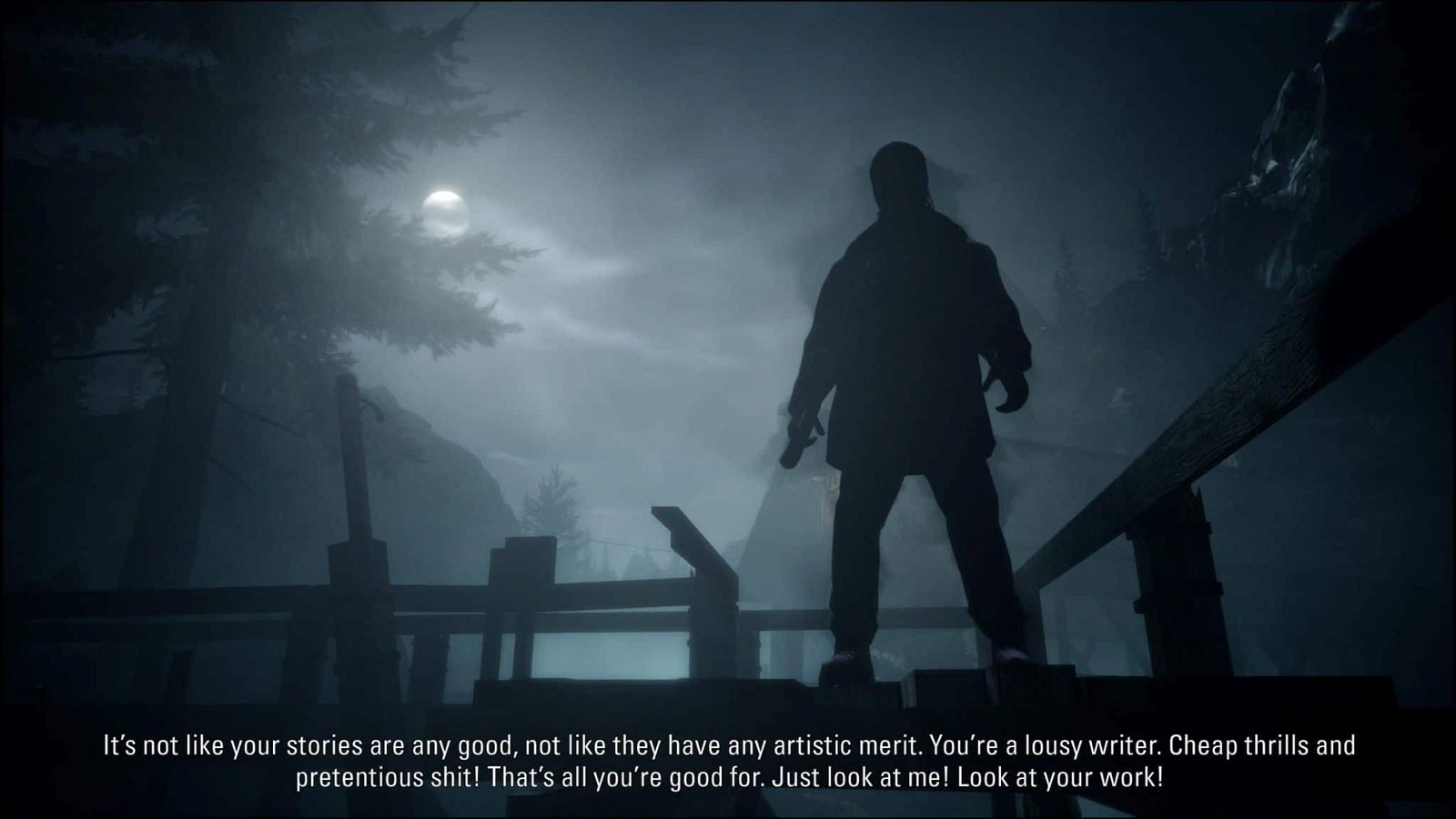 While the story and atmosphere of Alan Wake have aged well, the gameplay side of things, unfortunately, have not aged as well. The core components of Alan Wake’s gameplay are serviceable and feel like most 3rd-person action games; it’s the fine level of mechanics and detail that seem to be lacking in comparison to modern-day counterparts. The most telling sign of this is when playing Alan Wake; it really feels like a game from 2010, not to say that games from that era were bad, it’s just that developers have come a long way since then. For example, if you were to play a game like Uncharted 4, characters have a fluidity of motion and gameplay has a certain level of precision that only modern-day engines can achieve.

In regards to the gameplay of Alan Wake: Remastered, it remains completely unchanged from its 2010 counterpart. Outside of pre-rendered cutscenes, characters move like carboard cutouts, and facial animations make characters look like literal robots when they’re talking to you. Combat has an unnatural stiffness to it as well. For returning players, this may not be so much of an issue, as it’s easy to put on your rose-tinted glasses and overlook things like this, but for players that have never played Alan Wake before or even people that have never experienced the late 2000s, 3rd person action games this can prove to be a very jarring experience. The issues I have with Alan Wake: Remastered are virtually the same ones I had with the Mass Effect 1: Remaster, where I wonder if a full-on remake would have been better suited here rather than a remaster, Alan Wake: Remastered is still an enjoyable experience overall but be sure to manage your expectations. 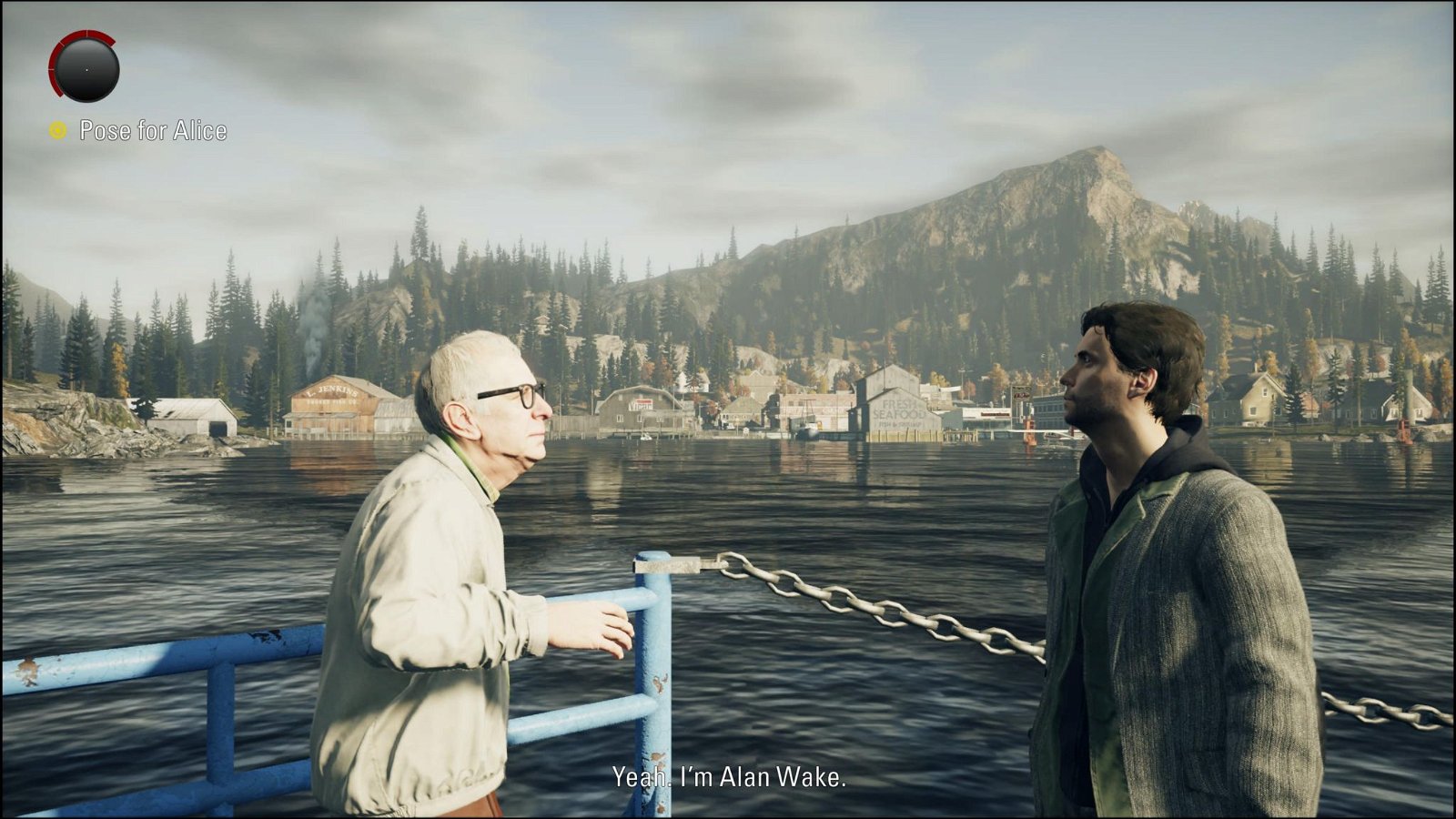 In regards to the differences between the original 2010 release and the remaster, the main thing that stands out is the graphical changes on the PS5 Alan Wake: Remastered runs at a smooth 60fps at 4K, which means that the game has never looked better. It is clear that while making this remaster, great care was taken to upgrade the visuals to a modern standard as best they could while also preserving the unique atmosphere of the original game. Not only have they upgraded the graphical fidelity of the gameplay and environments, the cutscenes have also received a massive overhaul.

Alan Wake: Remastered has also removed what is easily its most controversial ‘feature’, which was the rampant product placement throughout the whole game, Energiser batteries have been replaced with what can be best described as off-brand knock-offs, and you’ll no longer get random TV advertisements for Verizon in the middle of gameplay, I see this as nothing, but an absolute win as real-world products can quickly take you out of a game. Finally, the remaster includes a developer commentary that can be turned on in the options menu, so you can hear the developers discuss their design process while you’re playing. It also comes with the two additional DLC chapters included. Unfortunately, American Nightmare is not included I can only assume that this is due to licensing issues.

What is easily the biggest issue with Alan Wake: Remastered is the audio quality. When we received the review code for this game, we were warned in advance that the pre-release version of the game had audio syncing issues with the cutscenes. Now I never experienced these issues with the cutscenes, but what I did experience was audio balancing issues with almost every other part of the game. For some reason, voice-over audio was all over the place. Sometimes characters would be as quiet as a church mouse while the music blared over them, which made subtitles almost mandatory, while at other times, certain sound effects would be playing way too loudly. This would drown out every other aspect of the game. No matter how much I fiddled with the audio settings, I could not find a way to get the audio to balance properly. This once again is an unfortunate side effect of remastering a game rather than remaking it. When it comes to story-driven games, I would rather be able to hear the dialogue than the same audio stinger repeated endlessly. Another way that the poor audio balancing detracts from the quality of the game is how the phenomenal voice cast is constantly being drowned out by what should be background noise. 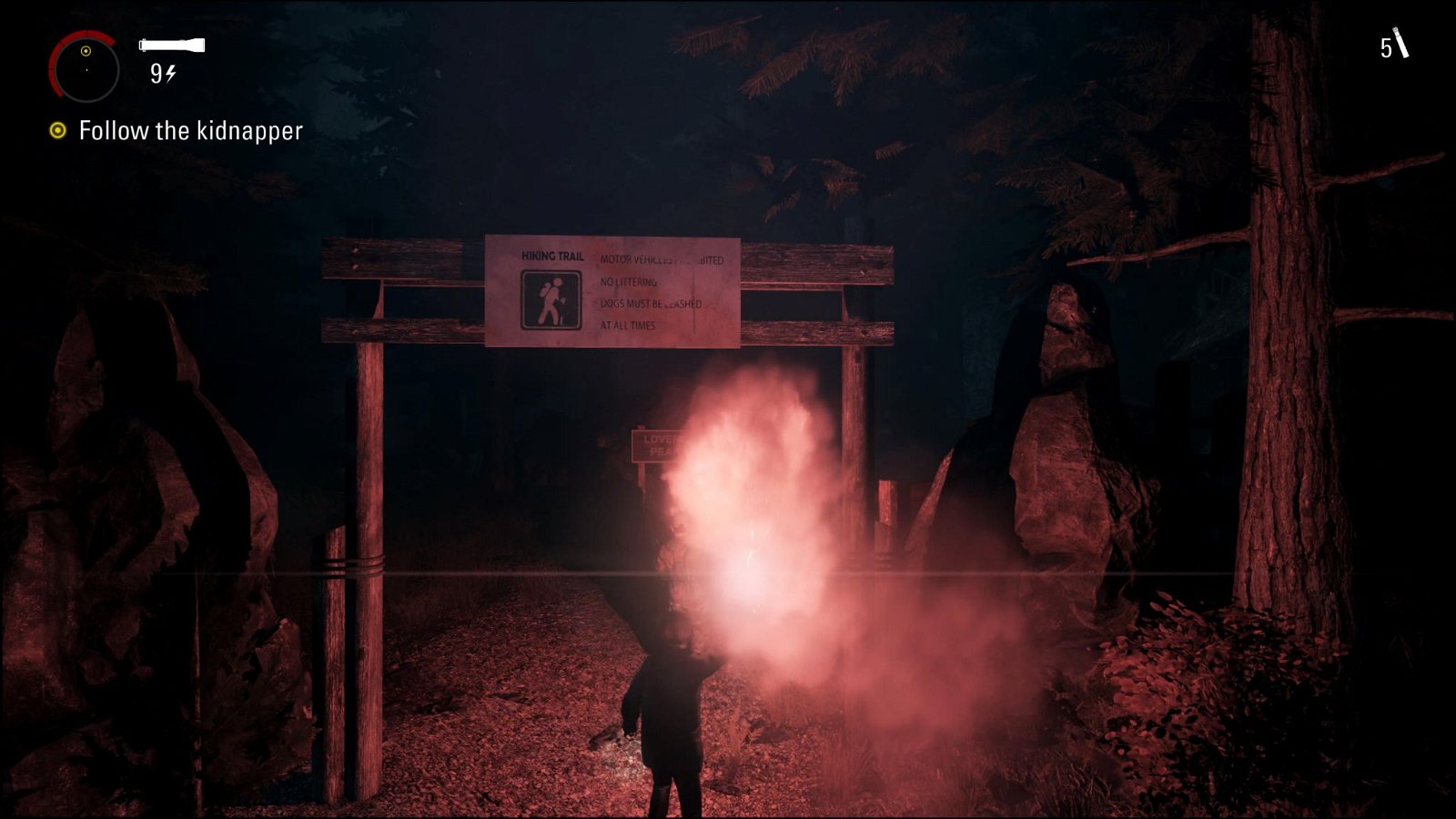 Overall, I still find Alan Wake: Remastered to be exceptionally intriguing and entertaining, yet flawed. While it might seem that I have been overly critical, it does not detract from the fact that this game is still phenomenal in its own right, and it is still my favourite Remedy game. Here’s hoping that the resurgence of Alan Wake through this remaster will reintroduce the idea of a potential sequel someday, and no, American Nightmare does not count.

Review Disclosure Statement: Alan Wake Remastered was provided to us by Remedy Entertainment for review purposes. For more information on how we review video games and other media/technology, please review our Review Guideline/Scoring Policy for more info.

Want more game reviews from The Outerhaven? Consider the following:

Get ready to bring the light as you fight your way through the small town of Bright Falls to discover the truth behind the mysterious manuscript and the disappearance of your wife. But take care that the taken don’t find you first.