The Altcoin market is in a gradual recovery after recording declines during the week. Ethereum leads the rest of the pack, trading above $1,500. After attaining highs of $0.68 on Feb.22, XRP was hit by the bearish wave that swept through the market. The decline to lows of $0.36 on Feb. 23 was followed by a period of consolidation. XRP bulls attempted to resume the uptrend but met a stiff barrier above $0.50. Ripple has since returned into the range as bulls await a fresh rally on XRP/USD beyond $0.5. At the time of writing, XRP is changing hands at $0.454, up by 1.71% in the last 24 hours and 6.73% on a 7-day basis. Ranking 7th largest, the XRP market cap stands at $21.07 billion with $3.27 billion in trade volume over the last 24 hours. Ripple gains legal victory in the Tetragon lawsuit as the Delaware Chancery Court has turned down the request of Tetragon to redeem its investment from Ripple Labs. Tetragon is Ripple’s largest shareholder and had led the Series-C funding round for Ripple at the end of 2019. The firm’s lawsuit filed on January 5 stems from an SEC lawsuit against Ripple. 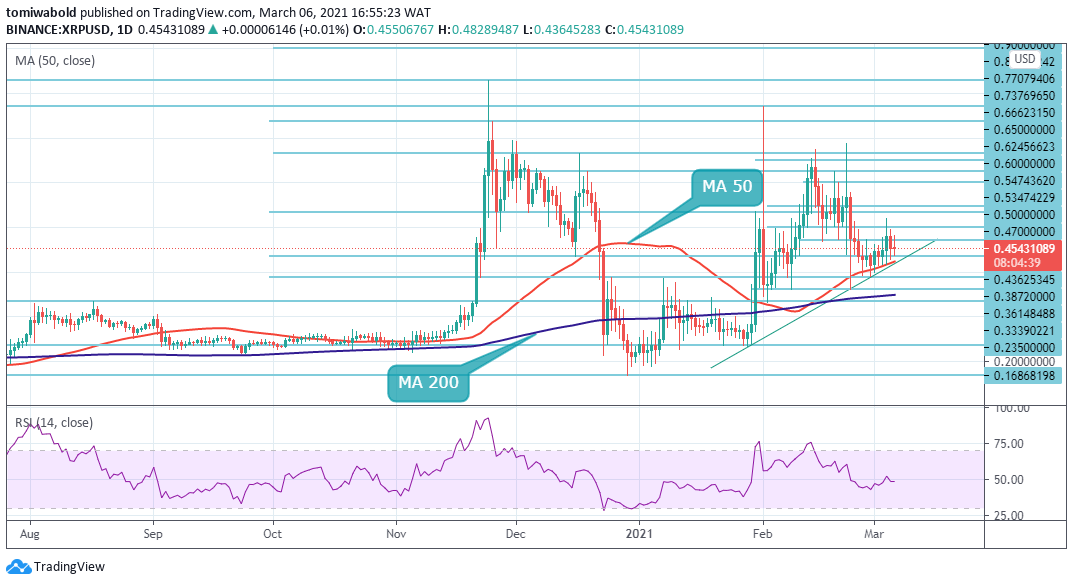 XRP rose to highs of $0.519 on March 4, but the bulls could not push the price past this level. This attracted profit-booking, the however excessive decline was curbed at the MA 50 ($0.4240). The RSI just at midline suggests possible consolidation. XRP could however break out of the range and start a trending move if the bulls shatter the resistance above $0.50. This may cause the XRP/USD pair to rally to $0.65.

On the contrary, the bears have not thrown in the towel yet and may try to sink XRP price below the MA 50 at $0.424. In this case, the support at the ascending trendline may act as a backstop for further declines. If this caves in, XRP may retest support at $0.34 coinciding with the MA 200.

Immediate support awaits at the MA 50 of $0.4426, below which the February 23 low at $0.3622 could be challenged. In any case, the support at the ascending trendline remains strong. The XRP/USD pair is only bullish while trading above the $0.50 mark, key resistance is found at the $0.55 and 0.65 levels.

Note: Kryptomoney.com is not a financial advisor. Do your research before investing your funds in any financial asset or presented product or event. We are not responsible for your investing results

Ripple price Today – Why XRP Holders Could Be Key In Lawsuit Against Ripple Labs – Explica .co