Fans bunch together, jumping and dancing along as Lil Nas X’s voice booms out. When he appears, the crowd goes wild. Suddenly, the entire audience is on stage with him. It’s not that he’s created such an intimate show that kids in the crowd feel like they’re practically on stage—no, they’re literally on the stage with the “Old Town Road” singer.

When the next song starts, the audience is transported en masse to a new winter wonderland setting as the scenery is designed to change with each new track. Welcome to the age of virtual concerts.

Roblox was investing in creating a more lifelike digital experience before COVID-19 spread across the world, but pandemic- related lockdowns accelerated those plans.

Concerts and live events are traditionally a massive market. Before the planet took a collective pause and hunkered down, trade publication Pollstar predicted that the concert industry would hit a record US$12.2 billion in 2020. But it’s become clear that audiences won’t be returning to crowded concert venues any time soon, and Pollstar has now estimated that the live event industry lost US$30 billion last year.

But kids still want to connect with their favorite brands and with each other, and the lockdown saw audiences flock to the virtual platforms they were already engaging on—like Roblox and Fortnite—treating them like places to simply hang out, according to new research from insights firm Dubit. And while kids were loitering in these digital hubs, the companies running them began testing new event-like activities to draw even more kids in.

Recreating the energy and excitement of a live concert or event is no easy task—how do you replicate that intimate experience when there are a couple hundred computer screens in the way?

Early in the pandemic, screens were filled with museum tours and Zoom-filmed concerts. The “event” was simply a new type of show, no different than the traditional 22-minute episode.

But companies like Roblox, Hellosaurus and Epic Games see more virtual interactivity on the horizon, and they’re hoping to carve out a slice of the suddenly hyperactive digital live event space.

“Concerts and live events are exciting because they’re participatory,” says Jonathan Vlassopulos, Roblox’s global head of music. “Social interactivity is [what] you lose online. But our events are inherently social because 80% of our users are playing with a friend.”

The market for virtual events is predicted to grow to US$774 billion over the next decade (up from its current US$78 billion) as COVID-19 forces in-person gatherings to transition to save money, comply with new protocols and find audiences post-pandemic, according to market research firm Trends Exchange.

Roblox, which has more than 150 million players globally (mostly kids and tweens), has become a social meet-up spot for kids who are looking to share experiences with their friends, Vlassopulos says. The company is leaning on that, and leveraging its tech to turn the more passive viewing experience of watching events like live concerts into something kids can interact with in a variety of ways.

With Lil Nas X, Roblox built a wild west- themed pre-show environment where players could explore, answer trivia questions and find hidden tokens. When the concert began, the background and setting changed to match each song. There were camera zooms and pans, and those in the audience could send their avatar on stage to dance and interact with the singer.

But music and concerts are just the tip of the digital event iceberg, says Vlassopulos. Roblox is looking beyond its reputation as a gaming company to become a platform that hosts all manner of interactive experiences, including everything from toy launches, to kid-skewing pop-up shops, to movie screening events complete with director Q&As, clips from the film and opportunities to sell branded merchandise. “With digital events in Roblox, we’re able to elevate the fan so they feel engaged because they’re along for a journey and part of the performance,” says Vlassopulos. “These global events, with their different effects and changes, can really feed kids’ imaginations.”

Bringing big spectacles into the digital space is one growth area, but there’s also a demand for content that turns everyday moments into digital experiences. That’s where Hellosaurus and its founder James Ruben come in. 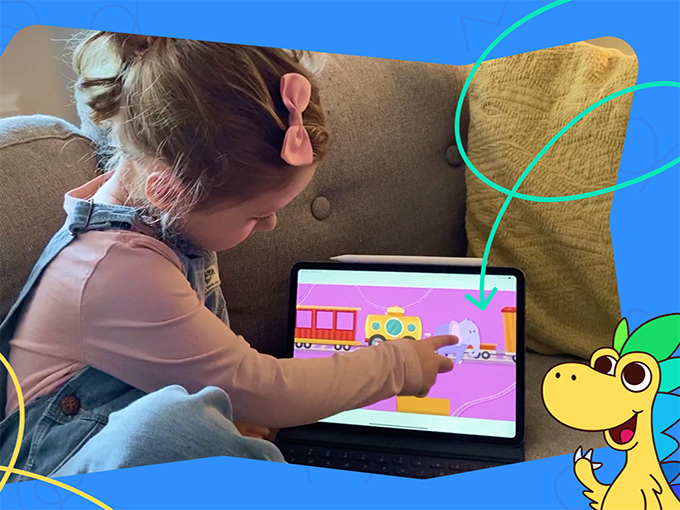 Before founding Hellosaurus, an interactive content SVOD, Ruben led production management on the HQ Trivia app, which took the idea of bar trivia and turned it into an interactive game that was scaled up to incorporate a global audience. Now, he’s trying to do something similar with Hellosaurus, except the focus is on transitioning common kid experiences, like birthday parties, into events they can participate in while using their touchscreen, camera and microphone to tap, move around and respond to the content. Hellosaurus doubles as both a suite of tools for creators to make interactive kids content, as well as a closed platform with shows for kids ages three to eight. Through interactivity, children can go from passively observing the content to becoming a key part of it, says Ruben. With in-person gatherings out of the question, this is the closest kidcos can get to creating a live experience where audience interaction actually affects the performance and content, adds Ruben.

Hellosaurus saw this when it launched its first original series, The Birthday Show. A fast- tracked proof of concept for what Hellosaurus could do, The Birthday Show is an interactive series that met the demand for a virtual experience that could replicate parties as kids were in lockdown, he says. In the live-action and animated mixed-media series, a real-life host guided kids through interactive games and activities, including opening presents and eating cake.

At a time when families are at home—and even after the lockdowns lift—gamifying experiences like exercising, meditating or just watching videos can turn screen time into a more engaging and positive activity for kids and their parents, says Ruben.

Epic Games has also dipped its toe in the digital concert space with events hosted in Fortnite. Musicians like Marshmello and Travis Scott performed live in a studio, and using Epic’s real-time rendering software Unreal, the live streams incorporated elements that would be otherwise impossible (or at least very, very difficult) at a live event, like floating singers or rapidly changing backgrounds.

The Travis Scott concert alone saw more than 10 million viewers tune in, and Epic’s hope is that when creators see that number, they’ll begin thinking about Fortnite as a new home for live events, says Andy Blondin, senior product manager of Epic Games.

As the maker of the Unreal game engine, which gives creators the tools to add e ects to their productions in real time, the com- pany is looking to enhance producers’ live events with a digital twist. On Fortnite, which now boasts around 350 million players, there’s an opportunity for the brand to expand far beyond its battle royale roots to becoming a virtual event platform that leverages the social community aspect of the game to host immersive experiences. With both of these aspirations, COVID-19 is accelerating Epic’s plans in a big way, says Blondin.

But the interactivity and engagement that a game setting like Fortnite can provide isn’t just limited to the virtual world. The Unreal Engine is being used to enhance live in-person events like keynote speeches and product launches, with presenters working in extended reality studios to blend in animation in real time. Filmed in studios like LA-based Pike, these productions can mix real performances with animation and a virtual environment, allowing producers to create offerings that are more visually engaging and immersive than just watching a Zoom-recorded event, says Blondin.

Digital live events can also incorporate play by surprising audiences with different effects that suddenly change the environment, providing a space for them to explore or letting them react in real time. In a post-pandemic world, Blondin predicts that big digital events could also mark the future of pay-per-view content, since families might not be too eager to go out to see a movie or concert when they can watch, and interact with, engaging alternatives at home.

“At a concert, you can get the excitement and energy of being there, but they’re also passive experiences where you’re just watching the performance,” says Blondin. “The fact that this new experience is gamified makes it more engaging, which we can support by building a storyline and adding in some mystery about what’s going to happen next.”