Shell now owns interest in the Fuerte Sur, Purple Angel and COL-5 blocks, placed in the deepwaters of the Caribbean Sea offshore Colombia where a new gas province including the Kronos (2015), Purple Angel and the Gorgon (2017) wells were found. Per Ecopetrol, the deal was consummated on Dec 23.

Notably, Shell now being the new operator of the blocks, will contribute its know-how to address the technical challenges caused by offshore operations. Beside, this oil and gas supermajor will fund Ecopetrol’s investments.

In February, as part of the pact, both companies confirmed that they will drill an appraisal well by late 2021 and conduct the first production test in the area.

Per management at Ecopetrol, if these activities deliver positive outcomes, the findings could further develop and expand the country’s gas supply to more than 3 tera cubic feet based on the company’s estimations.

Importantly, the transaction is in line with Ecopetrol’s development plan focused on its reserves and output growth under its disciplined capital deployment. Further, the transaction is expected to bolster the company’s alliance with Shell as the latter’s interest is seen as a significant opportunity for Colombia to enhance its oil and gas blocks’ energy potential in a secure and effective manner.

Headquartered in Colombia, Ecopetrol is an integrated oil and gas company. Its operation includes extraction, collection, treatment, storage and pumping or compression of hydrocarbons.

Shares of the company have outperformed the industry in the past three months. The stock has gained 31.9% compared with the industry’s 30.4% growth. 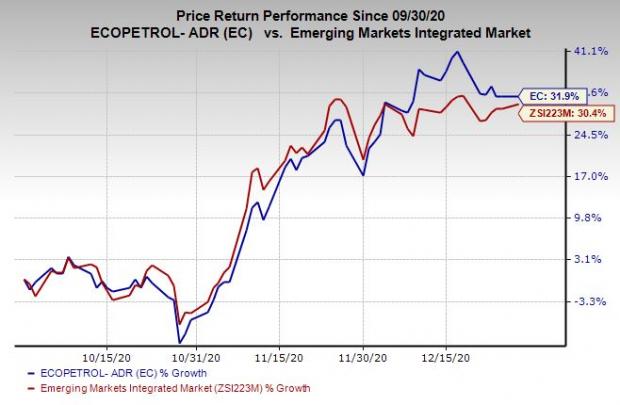 In the past 60 days, the Zacks Consensus Estimate for Northern Oil and Gas’ 2020 earnings has been raised 16.3%.

Experts extracted 7 stocks from the list of 220 Zacks Rank #1 Strong Buys that has beaten the market more than 2X over with a stunning average gain of +24.4% per year.

These 7 were selected because of their superior potential for immediate breakout.