SEOUL — At first glance, the massive Samsung semiconductor fabrication plant seems almost out of place in Pyeongtaek, which not that long ago was known more for its open pastures and barracks that housed thousands of American troops.

But this port city 50 km south of South Korea’s capital has transformed into a high-tech hub over the past decade.

“It was only 10 years ago this place used to be a pasture smelling of manure,” a 65-year-old cab driver said. “To think they’d build such huge buildings in this place.”

Under construction is the third of what will become a six-building chipmaking complex. The finished buildings, standing 83-meters tall and 500 meters across, are accentuated with tri-color block patterns.

The project, with an influx of workers, has given rise to an unprecedented real estate boom.

“Condominiums are going up one after another, and I’m getting more and more customers,” the cab driver said.

Pyeongtaek was once known mainly as a military town that housed Camp Humphreys, a U.S. Army base built in 1951 during the Korean War. The U.S. and South Korea agreed in 2004 to relocate U.S. military personnel stationed in and around Seoul to Camp Humphreys.

In return for cooperating with the relocation plan, Pyeongtaek received generous redevelopment funds from the national government. This financed an 8.16 trillion won ($7.2 billion) urban development project, put into motion in 2006.

The plan calls for 59,000 households to move into the 13.42 million sq.-meter area, which would add up to 144,000 people. There will be 13 new elementary schools serving the residents.

The project is about 60% complete. Condo prices “have more than doubled since the start of sales three years ago,” said a local real estate agent.

The cornerstone of the redevelopment project was recruiting Samsung to build new chip plants. The facilities will be built on an area measuring 2.9 million sq. meters, four times the space occupied by Kioxia’s largest semiconductor complex in Yokkaichi, Japan.

The plan was initially to grant Samsung a plot in the northern end of the redevelopment project. But that site was about 2 km away from a U.S. air base. 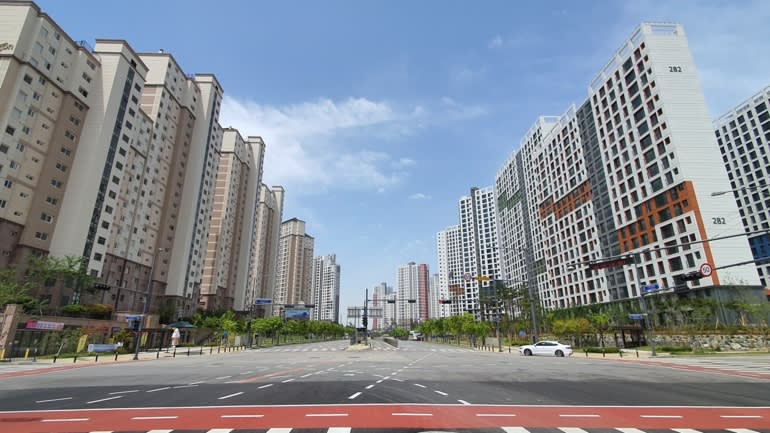 Condominiums are cropping up rapidly around Samsung production facilities. (Photo by Kotaro Hosokawa)

Samsung eventually requested land on the southern end that was more than 5 km from the air base. Just the slightest vibration from a plane taking off or landing would dent the production yield of chips.

The third building, the construction of which was announced in May, will contain clean rooms that can fit 25 soccer pitches. Nearby is a transformer substation operated by Korea Electric Power. Roads and a private waterway serve the complex.

Suppliers have established themselves in the vicinity. Chipmaking equipment makers such as Dutch player ASML and Applied Materials of the U.S. have created a “front-line base” of sorts. In all, hundreds of businesses regularly visit the Pyeongtaek campus.

Each Samsung chipmaking fab will create 20,000 jobs, according to Pyeongtaek estimates. More than 1,000 people have moved to the city, and the population has grown by 30% over a decade to 540,000 people.

The population is expected to double by the time the redevelopment project completes.

“Bringing in Samsung will lift tax receipts by a whole magnitude,” said a city official.

The South Korean economy is highly dependent on exports. Semiconductors make up a fifth of all exports, putting them on top of all other categories.

Because semiconductors are the top economic driver, the government has been generous with support. During a visit to Pyeongtaek in May, President Moon Jae-in unveiled a $451 billion plan to turn the country into a “semiconductor powerhouse.”

Moon’s plan includes tax deductions for capital investments and research in semiconductors, as well as a new low-interest loan program of over 1 trillion won and government assistance in securing a power and water supply.

More national universities will also offer majors in related fields, with the goal of training 36,000 semiconductor specialists over the next 10 years.

“Rivalries among semiconductor businesses have now begun to draw in countries,” Moon said. “My administration will also work with businesses as one team so Korea stays a semiconductor powerhouse,” he said.

Pyeongtaek is Samsung’s third-largest chipmaking hub in South Korea, after Giheung and Hwaseong. The world’s largest supplier plans to spend a majority of its more than $25 billion in annual capital investments at Pyeongtaek to bolster capacity for memory chips.

Chipmakers often consolidate production into a handful of hubs, since semiconductors are so small and light that they cost little to transport. Samsung decided to focus its resources in Pyeongtaek, since the greater Seoul area almost never experiences earthquakes and has an ample water supply. The Giheung and Hwaseong hubs are also less than 30 km away, making it easier for technicians to move between the facilities.

Semiconductors, which power everything from smartphones to cars and weapons systems, are now a more than $400 billion industry with major implications for foreign policy and national security. It is a flashpoint in the rivalry between the U.S. and China. Other countries are also eager to bolster production, and Japan is courting TSMC to set up a factory there.

Samsung positions is Hwaseong facility as its command center for research and development, and the Pyeongtaek plant as its hub for cutting-edge chipmaking. It also operates factories in Xi’an and Austin, investing in both China and the U.S. in an attempt to navigate the countries’ ever-growing divide.

Meanwhile at home, Samsung has been busy making overtures to the Moon administration.

Samsung announced 38 trillion won in new investments, including a new wing at its Pyeongtaek facility, when Moon unveiled his plans for the semiconductor industry. About a week later, it announced it would spend $17 billion to build a new American factory at an event in Washington, shortly before Moon met with U.S. President Joe Biden.

Both announcements provided Moon with a major political boost at a critical time.

“I’m particularly gratified that so many leading South Korean companies see the benefits of investing in the United States,” Biden told reporters after the summit.

He asked Samsung Vice Chairman Kim Ki-nam and other South Korean executives to stand for an applause, adding that their investments are “going to help fortify and secure the supply chains for things like semiconductors.”

South Korea’s conglomerates often announce big investments and job creation plans to coincide with overseas trips by the president, and were likely urged to do the same to build goodwill for the U.S. summit. Samsung, Hyundai Motor, SK Group and LG Group together announced 44 trillion won worth of investments in the U.S. 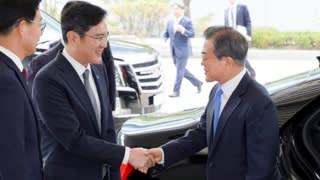 But the tally included many projects that are already underway, have been on the table long before the summit, or are still early in its planning stages. Samsung for example has not yet even decided on a site for its proposed U.S. plant.

More than anything, the investments represented nunchi — the art of reading the room that is so crucial in South Korean society.

Meeting the government’s expectations is especially important for Samsung, whose vice chairman and de facto head Lee Jae-yong has been imprisoned since January for bribing former President Park Geun-hye.

Now, five months after Lee’s sentencing, there has been talk of a potential pardon — a power reserved exclusively for the president. Those seeking clemency for the vice chairman, including Samsung itself, are gauging the mood in Seoul, particularly Moon’s, as they move forward.

Business lobbying groups have sent a joint statement to the presidential Blue House petitioning for Lee’s pardon. A poll by Hankook Research last month showed that 64% of the respondents support a pardon.

This pressure has seemingly caused Moon to exercise a bit of nunchi himself.

The South Korean president had previously rejected any notion that he would pardon Samsung’s scion. But his tone changed noticeably as of late.

“Many in the public sympathize” with pardoning Lee, Moon was quoted as saying to business leaders during a June 2 luncheon.

“I will listen seriously to people’s opinions and make a decision,” Moon told a news conference last month.

Space – Who are Christa McAuliffe’s children?