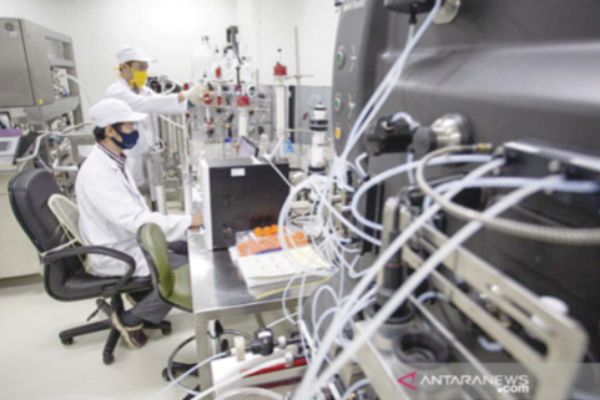 JAKARTA: The second dose of China’s Sinovac vaccine has been administered across the country since January 27, mostly to healthcare workers at the frontlines of the fight against the Covid-19 pandemic.Since the first coronavirus infections emerged on March 2, 2020, Indonesia has chalked up 1,037,99 confirmed Covid-19 cases and 29,331 deaths, according to data recorded as of January 28, 2021.
Under its vaccine programme, the government is targeting to inoculate 181.5 million people, free of charge, out of the total population of 271 million.

Indonesia received 15 million doses of the bulk vaccine from Sinovac to be manufactured into individual doses by Bio Farma. The Food and Drug Supervisory Agency (BPOM) has issued a certificate for Good Manufacturing Practices (CPOB), or a permit, to Bio Farma to commence the production of Covid-19 drugs and vaccines.
The government has so far ordered a total of 329.5 million doses of Covid-19 vaccines from various manufacturers.
Under various agreements, Indonesia is scheduled to receive 125.5 million vaccine doses from China’s Sinovac; 50 million doses from US-Canadian vaccine manufacturer Novavax; 50 million doses through multilateral cooperation between the WHO and the World Vaccine Alliance (Covax-Gavi); 50 million doses from the British manufacturer AstraZeneca; and, 50 million doses from German and US pharmaceutical companies Pfizer and BioNTech.
At the same time, the nation has been developing its indigenous Covid-19 vaccine, Red and White, named after its national flag, to make the country self-sufficient and self-reliant in Covid-19 vaccine production.
In addition to helping the country handle the Covid-19 pandemic, the development of the Red and White Covid-19 vaccine would also demonstrate Indonesia’s capability to singlehandedly produce a vaccine against the coronavirus.
The indigenous vaccine is currently being developed by a consortium comprising the Eijkman Institute for Molecular Biology, Indonesian Institute of Sciences (Lipi), Gadjah Mada University (UGM), University of Indonesia (UI), Bandung Institute of Technology (ITB), and Airlangga University (Unair).
According to the Eijkman Institute for Molecular Biology, the development of the Red and White vaccine has reached 60 percent on the laboratory scale.
“Calculated in terms of the percentage, it is at around 60 percent, which means we are still in the process of isolating and characterising the recombinant protein that we have designed, which will be generated by mammal cells or yeast cells,” Amin Soebandrio, head of the institute, said.
The Red and White vaccine is being developed using the recombinant method, wherein the entire virus is not used, but only certain segments deemed important are reproduced and used as antigens, he explained.
Soebandrio said that if the recombinant protein is successfully expressed, the process could be taken to the preclinical testing stage involving animals, and that would take one or two months.

After animal testing, the domestic vaccine seeds will have to be given to PT Bio Farma, likely in March, 2021, he added.
The state-owned pharmaceutical company will formulate the vaccine seeds so that they can be prepared for clinical trials in humans, he informed.
The Indonesian Institute of Science (Lipi) is targeting to conduct clinical tests for the Red and White vaccine in the second semester of 2021.
“Our target is to complete in-vitro and in-vivo test (on animals), and start the clinical test in the second semester of 2021,” Lipi chairman Laksana Tri Handoko said.
As part of the national team for the development of the Red and White Vaccine, Lipi has been working ceaselessly on vaccine development, Handoko noted.
Lipi has certified infrastructure in place for developing the vaccine, including a biosafety level-3 (BSL-3) laboratory, he said.
“Lipi’s team is working hard to accelerate the development of domestic-made (Covid-19) vaccine. Lipi has focused on (the development of a) vaccine with the re-combinant protein platform, but (is) using a different target of the protein (compared) with those of Eijkman’s,” he remarked.
Meanwhile, State Enterprises (BUMN) Minister Erick Thohir has said an indigenous vaccine could emerge as a game-changer that will make the country self-reliant in Covid-19 vaccine production.
“Yesterday, the Minister of Health visited Bio Farma, and we reported that we do not want to continue to depend on imported vaccines; so we are developing the Red and White vaccine, and it takes time. Today, along with the KPK (Corruption Eradication Commission) and the Minister of Health, we will monitor the Red and White vaccine together to make it a game-changer, so our country does not merely depend on foreign vaccines,” Thohir stated.
Earlier, Research and Technology Minister Bambang P. S. Brodjonegoro had highlighted the government’s decision to accelerate the clinical trial of the Red and White Vaccine to ensure mass production for the public by 2021-end.
“We have communicated with Bio Farma and BPOM. We will make all-out efforts to accelerate the clinical trial while adhering to every required protocol,” Brodjonegoro said late last year.
Three vaccine seed developments by Airlangga University, the University of Indonesia, and the Eijkman Institute have clocked the quickest progress, he informed.
“Hence, it is estimated that the three of them have the potential to hand over vaccine seeds to Bio Farma in the first quarter of next year,” he affirmed.
“Indonesia, with a population of 271 million, needs vaccine in large quantities. Moreover, re-vaccination or vaccine booster would be required. Hence, cooperation with other countries is direly needed for the development of a domestic vaccine to support self-reliance in vaccine production,” Brodjonegoro explained.
He estimated the Red and White vaccine would be ready for distribution in the fourth quarter of 2021.
“Hopefully, in the fourth quarter of 2021, the Red and White vaccine would be distributed to the public,” he stated.
The minister said he is optimistic that the indigenous vaccine could be exported if domestic requirements are met.

Trends to watch out for this year | Daily Express Online