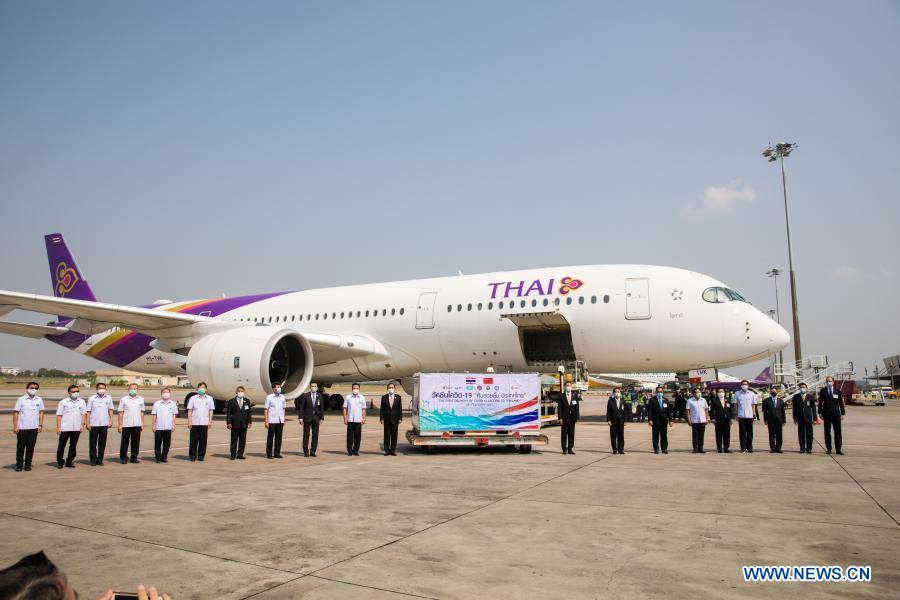 (BA)NGKOK, Feb. 24 (Xinhua) — The first batch of COVID-19 vaccines that Thailand ordered from China’s Sinovac Biotech arrived in the capital Bangkok Wednesday, putting the country on track to kickstart its national inoculation program.

The 200,000 doses, the first shipment among 2 million doses Thailand ordered from the Chinese biopharmaceutical firm, were delivered by a Thai Airways International cargo flight from Beijing to Bangkok.

Thai Prime Minister Prayut Chan-o-cha, Deputy Prime Minister and Public Health Minister Anutin Charnvirakul, as well as Chinese Embassy official Yang Xin were at the airport for the handover of the vaccines.

“Today is a historic day with the reception of the first lot of vaccine,” Prayut said at the vaccine handover ceremony, expressing his gratitude for China’s timely delivering of the vaccines.

“Without any unexpected problems, subsequent lots will arrive as planned,” he said.

Calling it another major progress in bilateral anti-pandemic cooperation, Yang Xin said he hoped the Sinovac vaccines would play an active role in supporting Thailand’s fight against COVID-19.

Thailand approved the Sinovac vaccine for emergency use on Monday, and the authorization will be valid for one year, according to Anutin.

Upon the vaccines’ arrival, three days would be required for the final inspection before the national vaccination campaign begins, Prayut said.

The first batch of the Sinovac vaccines will be distributed to 13 provinces, including Bangkok, and administered to at-risk groups, including medical workers, close contacts with COVID-19 patients and people with certain chronic illnesses.

A second batch of 800,000 doses of the Sinovac vaccines is scheduled to arrive in Thailand next month, followed by a third batch of the remaining 1 million doses.

Thailand has set a three-staged national inoculation program, aiming to vaccinate enough of the general population to create herd immunity. Besides the Sinovac vaccines, it would also use AstraZeneca vaccines.

As of Wednesday, the Southeast Asian nation’s total COVID-19 tally rose to 25,692, with more than four-fifths of the infections being detected since the new wave of outbreak erupted in the country in mid-December. Enditem

NYSE News Today – How Much Of SC Health Corporation (NYSE:SCPE) Do Insiders Own?

Sinovac – AstraZeneca Vaccine’s Use Shrinks in Asia Amid Safety Woes

NYSE News Today - How Much Of SC Health Corporation (NYSE:SCPE) Do Insiders Own?

Roblox Game - Roblox shares to be listed at start of March | Pocket Gamer.biz