The United Arab Emirates plans to make a Chinese-developed COVID-19 vaccine under license, with the Persian Gulf nation aiming to follow Brazil down that path in a bid to ensure supplies.

The UAE, which in December became the first country to approve the emergency use of a coronavirus vaccine from Sinopharm, has secured a deal to manufacture the Chinese firm’s vital product later this year, according to Abu Dhabi-based newspaper The National.

The country is among a number that are seeking to localize the production of vaccines developed by China to meet challenges in vaccine supply and threats of more infections arising from new coronavirus strains. Brazil has sped up preparations for manufacturing CoronaVac, a vaccine from China’s Sinovac Biotech.

A report from South Africa said the Sinopharm vaccine is strong in countering the new variant found in the country, while Moroccan authorities said it is effective in older people, Xinhua reported.

The UAE authorities have been campaigning hard to get their citizens inoculated. “The Sinopharm vaccine is an integral part of the UAE’s voluntary vaccination program,” Cooke said. “So far this program must be deemed a success, with the UAE enjoying the second-highest per capita vaccination rate in the world.

“As an open and diverse economy with excellent infrastructure and a vibrant labor market, there is no reason why the UAE could not produce large volumes of the vaccine,” said Cooke, noting that the UAE and China have worked closely to overcome other challenges associated with the pandemic and that the bilateral relationship appears strong.

At a regular news conference on Monday, Wang Wenbin, China’s Foreign Ministry spokesman, said China supports domestic companies in conducting joint R&D and manufacturing with foreign partners, and in exporting vaccines to countries that are in urgent need, have certified Chinese vaccines, and authorized their emergency use.

“We also support and assist foreign vaccine companies in manufacturing in China, whose vaccines will then be delivered overseas,” he said.

Sinovac has been cooperating with Brazil’s Butantan Institute, a public research center and one of the largest vaccine makers in the world, to co-manufacture the vaccine in Sao Paulo for domestic use and for exports to other countries in South America. 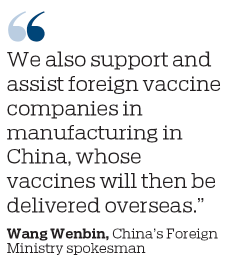 Brazilians are now “really proud” of the approvals and the fact that technology transfers will give the country’s vaccine industry a boost, said Benny Spiewak, a lawyer and partner at SPLaw, a life sciences-focused law firm in Sao Paulo.

The Butantan Institute is working toward a goal of manufacturing 600,000 doses of CoronaVac a day, reaching more than 17 million doses by mid-March. Chinese technology and supplies are key to support such a level of production.

“We have a new order for 8,000 additional liters of raw ingredients (from China). With such an amount of raw material, the production will continue very quickly,” said Dimas Covas, director of the Butantan Institute.

Laura Olivera, a content producer at CCTV Latin America in Sao Paulo, said: “At the beginning of the pandemic, there was a general feeling of mistrust toward all vaccines, (including) Chinese vaccines.

“After the Sao Paulo government closed its agreement with Sinovac and began to produce the vaccines on Brazilian soil, this sentiment, little by little, began to change and the population is relying more and more on vaccines.”

Brazil’s Fiocruz biomedical center, in Rio de Janeiro, is preparing to fill and finish 2.8 million doses of AstraZeneca‘s vaccine after receiving the first shipment of active ingredients from China on Saturday.

In the UAE, the National Emergency Crisis and Disaster Management Authority said the country has the ability to deal with the pandemic through a flexible and highly agile model in dealing with any developments.

Cooke said: “This wouldn’t be possible without securing large, upfront supplies of the Sinopharm vaccine, which is relatively affordable and accessible compared to several of the other vaccines which have been recently developed.”

Sergio Held is a freelance journalist for China Daily.