Your vocabulary word for the day is “boing.” Definition: The sound the stock market makes when it’s bouncing.

Early indications from the futures market this morning suggest stocks may end the week on a high note as investors continue to be in buy-the-dip mode. But there’s still a ways to go if the market hopes to erase the steep losses from earlier in the week.

This seems to be another page in the narrative we’ve been seeing for a while where investors are trying to figure out valuations based on two main fronts. The first is a continued tug of war between reopening stocks and those that could benefit if something happens to derail the domestic COVID-19 recovery. The second is whether a spike in inflation will be a long-term thing or just temporary (or “transitory” in Fed-speak).

Uncertainty about those issues seems to continue to inject some caution into the market. While risk assets like stocks and oil are higher and the Cboe Volatility Index (VIX) is falling, demand for relatively safe U.S. government debt is up. Though the 10-year Treasury yield flirted with 1.7% earlier this week on inflation news, this morning it finds itself below 1.65%.

After a pretty volatile week it’s good to see today’s equity rally, especially given that Disney (NYSE: DIS), a Dow Jones Industrial Average ($DJI) component, is struggling this morning and retail sales came in lighter than expected. The retail sales report for April showed no movement when a Briefing.com consensus had expected a 1.8% rise.

DIS shares were down more than 4% after the entertainment giant missed revenue estimates and fell short of expectations for subscribers to its Disney+ streaming unit. Still, DIS crushed it when it comes to earnings, reporting 79 cents per share compared with analyst expectations of 27 cents.

In a mirror image to DIS, DoorDash (NASDAQ: DASH) shares were up more than 7% after the food delivery company reported stronger-than-expected earnings and raised its gross order value forecast. Still, DASH reported a wider than expected loss per share.

While it remains to be seen how stocks will finish today, it’s good to see investors building on yesterday’s impressive broad-based rally ahead of a weekend, which most of us are probably quite ready for.

Sometimes it can be helpful to ask “what if” questions. What if there hadn’t been good news on the vaccine front or encouraging data from the labor market on Thursday? Would investors still have been in the mood to buy this week’s significant dip?

While the main three U.S. indices might have still ended in the green given underlying strength in stocks, it could have been more of a lackluster day without news that the Centers for Disease Control and Prevention gave the greenlight for fully vaccinated people to resume activities without wearing a mask or physically distancing.

That news provides another shot in the arm for the reopening economy, where increased spending activity at restaurants, bars, and shops is helping jobs and gross domestic product get back on their feet.

It also seemed to help that weekly initial jobless claims came in at 473,000 when 510,000 had been expected in a Briefing.com consensus. Although 473,000 is still a lot of new claims, the new data point is a step in the right direction after the most recent employment situation report, which disappointed.

The reopening economy is coming with inflation, with reports on consumer and producer prices both rising more than expected this week. But there are signs that investors may have been expecting worse things from yesterday’s producer price index data.

For one thing, the market didn’t react too much to the news. And longer-term treasury yields actually fell during the day, which isn’t something you might expect after a hot inflation report or stronger than forecast unemployment claims. Maybe it was a case of investors adjusting a bit to the potential for a new normal of at least temporarily rising prices. After all the Fed has said it expects inflation to be transitory.

For another thing, tech stocks rebounded. That runs counter to the trend we’ve been seeing of those stocks selling off on inflation fears. Perhaps investors thought that type of selling had simply gone too far based on what we know now about the inflationary atmosphere.

Next week’s economic calendar is relatively light, but there are still some releases with the potential to have a high impact on trading.

The housing market is scheduled to be a big feature in next week’s economic reports, with April housing starts and building permits numbers expected on Tuesday and April existing home sales data due out on Friday. Although it tends to have less of an impact, the National Association of Home Builders/Wells Fargo May housing market index could be interesting to watch on Monday given high lumber prices and supply chain issues. Consumers have been facing higher home prices amid tight inventory.

Weekly reports that can also move the market include those on crude oil inventories—especially given the surge we’re seeing in many commodities (see below)—and initial unemployment claims. It could be interesting to see whether claims continue downward.

Turning to earnings reports next week, Home Depot (NYSE: HD) and Lowe’s ((NYSE: (LOW))) could offer more insight into high lumber prices and the general housing market. Retailers Walmart (NYSE: WMT), Target ((NYSE:TGT)), (TJX) (((NYSE:(TJX)))), and Kohl’s (NYSE: KSS) could shed more light on the state of the U.S. consumer. Meanwhile, it could be interesting to see whether Hormel Foods (NYSE: HRL) has anything to say about inflation and whether Deere (NYSE: DE) has any comments on agricultural markets or infrastructure plans from Washington. 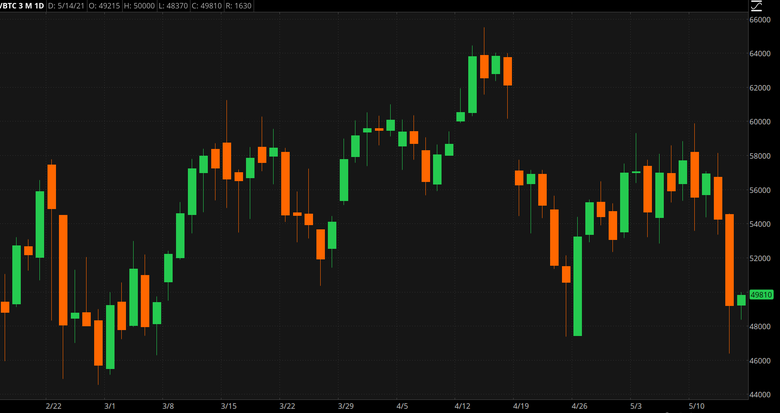 CHART OF THE DAY: MORE THAN A BIT (LOW)ER: Bitcoin futures (/BTC—candlestick) fell sharply Thursday after Tesla’s ((TSLA)) CEO said the electric vehicle maker has stopped accepting the cryptocurrency for automobile purchases out of concern about “rapidly increasing use of fossil fuels for bitcoin mining and transactions.” Data source: CME Group. Chart source: The thinkorswim® platform. For illustrative purposes only. Past performance does not guarantee future results.

High Notes: Given the selling this week, it may be a good time to remember that the market overall seems to be in a pretty strong place. On Monday, for example, a net 44.55% of S&P 500 Index (SPX) stocks hit 52-week highs, which was the strongest reading going back to at least 1990, according to Bespoke Investment Group. Breaking things down by sector, Materials, Industrials, and Financials also saw their best showing in more than three decades. More than 84% of Financial sector companies hit 52-week highs. It’s probably not too much of a surprise that these sectors are doing so well as they all stand to benefit from a recovering economy.  Notably, more than half of SPX Energy (IXE) stocks hit 52-week highs, not a record but still in the 99th percentile of days since 1990, Bespoke said.

Consumer Discretionary stocks also did well. “Just about every other sector saw a reading in the top 5% of all periods with a single major exception: Technology,” the Tuesday Bespoke note said. As we’ve said before, tech stocks have seen huge gains over the last year, so a pullback could have been expected. That’s especially true as investors move out of growth-oriented names as interest rates rise and into cyclical stocks that stand to fare better in a reopening economy.

Start Of A Supercycle? While Industrials, Materials, and Energy stocks stand to do well in the economic recovery, prices for many commodities themselves have been on the rise, feeding into inflation worries on Wall Street. Corn, soybeans, and wheat are up sharply from a year ago. Iron ore and copper have hit records. Surging lumber prices threaten to continue contributing to higher housing costs. Crude oil is at multi-year highs. While there are a multitude of reasons why commodities are going gangbusters, a common theme is worry that higher prices will put a dent in consumer spending that the economy needs and that the Federal Reserve might have to raise rates or pare its asset purchases to reign in an overheating economy. The Fed appears to not think rising prices will turn into long-term problematic inflation. So for now, Wall Street is having it’s cake (with wheat flour and frosting made from corn syrup) and eating it too, able to buy into companies that benefit from rising prices without having to deal with the tighter monetary policy or broad adverse consumer effects that can come from inflation.

From Food To Ford: This week’s consumer and producer inflation data seem to be officially confirming what we’ve been hearing anecdotally from company executives. Earlier this week we talked about Kimberly Clark (NYSE: KMB), Coca-Cola (NYSE: KO), and Procter & Gamble (NYSE: PG) talking about raising prices and Tyson Foods (NYSE: TSN) warning of “substantial inflation across our supply chain.” But it’s not just Consumer Staples companies talking about inflation. “We’re definitely feeling the commodity headwind,” Ford Motor’s (NYSE: F) CEO said on a recent earnings conference call. “It feels like we’re seeing inflation in various parts of our industry kind of in ways we haven’t seen for many years.” That’s from a Consumer Discretionary company. Here’s a comment from the CEO of the Industrials sector’s Honeywell International (NASDAQ: HON) in a recent earnings call: “For us, inflation is taking hold. Steel, semiconductors, copper, ethylene. Those are the four elements that we saw substantial inflation in, in Q1.”

Image by Rudy and Peter Skitterians from Pixabay

Financial Market - Buying a Home? Don’t Lose Your Head in a Crazy Market.