Natural gas futures faltered on Friday as weather forecasts for the week ahead and a storm in the Gulf of Mexico (GOM) presented the specter of demand loss. The overhang of a strange government inventory report and Federal Reserve policymakers’ nod toward higher interest rates also cast shadows over the market at the close of the trading week. 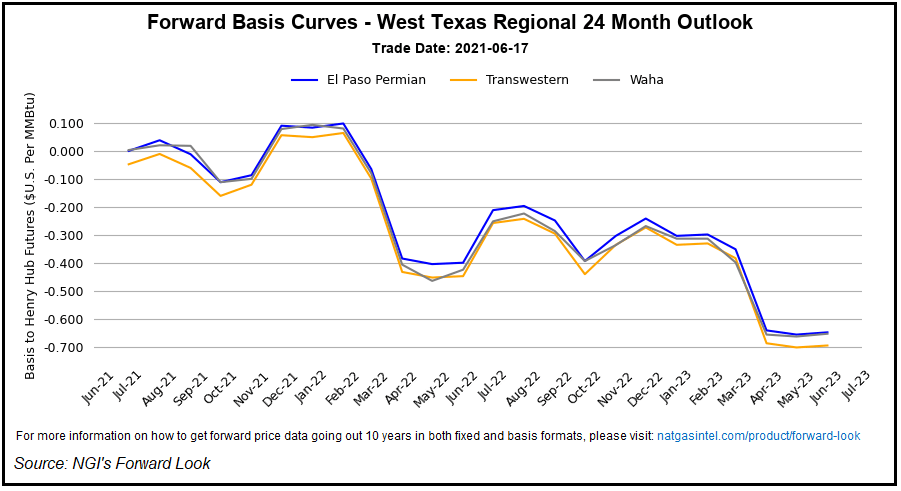 On the weather front, both the American and European weather models added cooling degree days (CDD) Friday for the week ahead. However, NatGasWeather said the pattern for Tuesday through Friday (June 25) was still “not quite hot enough” and could result in “only moderate national demand.”

Looking ahead to the final week of June, the firm said the models showed “very warm to hot conditions over much of the western, southern and eastern U.S., with highs of mid-80s to mid-90s, 100s over the Southwest.” Still, the overnight European model shed a few CDD “for this important period” and “the natural gas markets likely noticed.”

The National Hurricane Center (NHC), meanwhile, said a potential tropical cyclone in the GOM traveled north on Friday and was expected to approach the north-central Gulf Coast by Saturday, drenching the Louisiana and Mississippi coasts with downpours. “A slow northeastward motion across the southeastern United States is likely after landfall through the weekend,” the NHC said. The system was expected to bring heavy rains, winds and cloud cover that could minimize cooling demand.

Prominent producers in the GOM, including Chevron Corp. and Occidental Petroleum Corp., had begun by Friday to pull some nonessential staff from offshore facilities as precautions ahead of the storm, though production was not expected to take big or lasting hits.

The storm’s impacts “are likely to be primarily bearish due to demand destruction from showers and cooling, as well as the potential for delays” to liquefied natural gas (LNG) cargoes, NatGasWeather said.

LNG feed gas volumes, already under temporary pressure because of annual maintenance events, hovered close to 9.7 Bcf on Friday – on par with the two previous days but well below the 11 Bcf level routinely eclipsed in May.

Stock and commodity markets broadly lost ground or gave up gains on Thursday after Federal Reserve officials said they expect higher interest rates by late 2023. They had previously forecast that rates would remain near historic lows through 2023. The change in projection followed mounting concerns about inflation and further weighed on markets Friday.

Consumer prices have surged over the past couple of months. This developed amid pandemic supply challenges that linger at a time when consumers are traveling and spending more freely following successful vaccination campaigns. The U.S. Labor Department’s consumer price index rose 5% in May from a year earlier, the fastest pace in 13 years.

“Inflation continues to run a little hot,” said Raymond James & Associates Inc.’s Mike Gibbs, a managing director. “We continue to believe this dynamic is due to enormous demand in the reopening, accompanied by supply chain shortages.”

Bespoke Weather Services said the inflation-expectation trade in markets is real, “and if indeed natural gas has been a part of that ride, that could promote selling pressure as well.” The market “definitely has a bit of a heavier feel,” the firm added Friday.

EIA reported an injection of 16 Bcf into natural gas storage for the week ended June 11, a print altered by a one-time adjustment in the Pacific that drove down working gas stocks in that region. Citing an accounting change, Pacific Gas and Electric Co. (PG&E) reclassified 51 Bcf from working gas to cushion gas, effectively removing that amount from the available inventory.

The reclassification marked the largest such adjustment on record in a given region. To put the magnitude of the 51 Bcf adjustment in the Pacific in context, analysts at Tudor, Pickering, Holt & Co. (TPH) said the region went from 4% surplus to the five-year average prior to the revision to a 13% deficit.

The implied build of 67 Bcf for the week, however, came in a few ticks below median estimates found in major polls.

“While our forward modeling remains conservative on gas’ share of thermal generation, the lack of response to pricing from coal continues to represent potential upside to our $3.25/MMBtu summer call,” the TPH analysts said.

Next-day cash prices lost momentum on Friday ahead of the weekend and the expectations for less heat in the week ahead.

NatGasWeather noted that “very hot conditions” persisted on Friday over most of the western United States and Texas, with highs of 90s in the South to 120 in the Southwest deserts for regionally strong demand.

However, demand was light across the Great Lakes and Mid-Atlantic regions as weather systems delivered “comfortable highs” of 60s to 80s, the firm said.

National demand will ease in the final full week of June, the forecaster added, “as weather systems track across the northern and east-central U.S.” However, substantial heat is still expected over the Southwest, while a drought in California could continue to minimize hydropower and put upward pressure on gas demand.

After avoiding blackouts Thursday, California grid officials warned again Friday that power supplies could be under pressure with triple-digit temperatures in the state’s deserts. California Independent System Operator asked residents on Friday to voluntarily minimize power usage to ward off outages heading into the weekend.

“If demand exceeds supply, at the direction of the state’s grid operator, PG&E and other energy companies in the state could be asked to turn off power in order to help prevent larger outages to the grid,” PG&E officials said. The company, however, noted that conservation efforts by Californians appeared to lower demand late in the week.

Against that backdrop, hubs in the West on Friday gave up some of the strong gains they piled up earlier in the week.

Prices were up across the Northeast, a bright spot. Algonquin Citygate climbed 40.5 cents to $2.895.

While weather-driven demand routinely ebbs and flows, StoneX Financial Inc.’s Thomas Saal, senior vice president of energy, said forecasts for more heat and expectations for strong exports over the balance of this summer keep him bullish on natural gas prices. Production, while improving from pandemic lows, is not yet keeping pace with accelerations in demand.

The summer conditions in particular should support cash price strength, he said. “The heat is still going to be all over the place,” Saal told NGI. “Balances are looking tight.”