Seagate Technology (NASDAQ: STX), one of the largest HDD (hard disk drive) makers in the world, is often considered a slow-growth stock. Demand for platter-based HDDs has waned in recent years, and they’re gradually being displaced by flash memory-based SSDs (solid-state drives), which are smaller, faster, more power-efficient, and less prone to damage.

Unlike its main competitor Western Digital (NASDAQ: WDC), which bought the flash memory chipmaker SanDisk in 2016 to expand its SSD business, Seagate still generates most of its revenue from traditional HDDs. The critics claim this key difference makes Seagate a weaker investment than WD.

So why did Seagate, a company that was frequently criticized for its dedication to a “dying” technology, generate such impressive gains? Let’s see how Seagate silenced the bears, and whether or not its stock is still worth buying after its market-beating returns.

Why the bears misunderstand Seagate’s business

The bears often claim Seagate’s dedication to platter-based HDDs is a weakness because SSDs will eventually replace all HDDs. However, SSDs still cost more than HDDs with the same capacity.

SSDs are replacing HDDs in a lot of higher-end consumer devices like notebooks, tablets, and hybrid devices. However, SSDs are making less progress in the enterprise, cloud, and data center markets, which prioritize high storage capacities and low prices over faster access speeds.

To deal with that shift, Seagate pivoted away from the lower-capacity consumer electronics market and developed more higher-capacity HDDs for those price-conscious markets.

This approach was less capital-intensive than WD’s development of flash memory chips and SSDs, and it insulated Seagate from volatile chip prices and the semiconductor shortage. That’s why Seagate’s operating margins have remained much more stable and predictable than WD’s over the past five years. 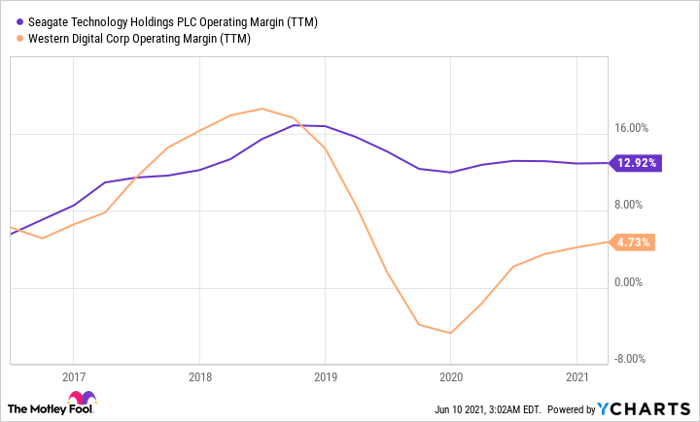 Seagate also spent most of its free cash flow (FCF) on buybacks and dividends instead of investing in higher-end SSDs. This conservative approach enabled Seagate to reduce its outstanding share count by 46% over the past decade. WD’s share count rose more than 30% as it issued more shares to cover its SanDisk purchase.

Seagate also continued to pay its dividend throughout the pandemic, while WD suspended its dividend a year ago. Seagate pays a forward dividend yield of 2.7%, and it spent just 63% of its FCF on that payout over the past 12 months. It also raised its dividend for the first time in four years in late 2019, then boosted that payout again last October.

Accelerating growth at a reasonable price

Seagate’s revenue rose 1% to $10.5 billion in fiscal 2020, which ended last July, but higher pandemic-related costs squeezed its gross and operating margins. As a result, its adjusted EPS fell 4%.

In the first nine months of fiscal 2021, Seagate’s revenue dipped 4% year over year to $7.7 billion. Most of those declines occurred in the first half of the year, and revenue returned to growth in the third quarter. Analysts expect its revenue to rise 1% for the full year and grow 8% next year.

Seagate’s non-GAAP gross and operating margins also stabilized sequentially after absorbing the pandemic’s impact over the past year.

Seagate expects its gross margin to hit 30%-33% by the end of fiscal 2022 as it generates more revenue from its higher-margin, higher-capacity HDDs. It also expects more of its sales to come from its “cost-optimized” 2TB drives, which account for less than a fifth of its revenue today.

Seagate’s adjusted EPS dipped 2% year over year in the first nine months of 2021, but analysts anticipate 9% growth for the full year as its earnings growth accelerates in the fourth quarter. Next year, they expect its earnings to jump 31% as its margins expand and it repurchases more shares.

Those are all rock-solid growth rates for a stock that trades at 18 times next year’s earnings. Seagate’s low valuation and sustainable yield, which is still much higher than the 10-year Treasury’s 1.5% yield, should also make it an attractive investment as the market rotates from growth to value stocks.

10 stocks we like better than Seagate Technology Holdings plc
When investing geniuses David and Tom Gardner have a stock tip, it can pay to listen. After all, the newsletter they have run for over a decade, Fintech Zoom Stock Advisor, has tripled the market.*

David and Tom just revealed what they believe are the ten best stocks for investors to buy right now… and Seagate Technology Holdings plc wasn’t one of them! That’s right — they think these 10 stocks are even better buys.

Bad Credit Credit Cards - Why you should not judge bad money habits, decisions of others