Home » Best Stocks to Buy – Bottomline: These stocks gave 1000% since Mar ’20; but what about fundamentals

The market is a sentimental beast. It swings from extreme pessimism to unbridled optimism (sanity lies somewhere in the middle). And in that process, it tends to distort valuations.

We seem to be experiencing just this sort of euphoria in certain pockets of the market today. But to get a better sense of the nature of this new bull phase, we decided to do some digging. We looked for top gainers across the market, without any market cap restrictions. Here’s what we found.

People usually seek inflation-beating returns for equity investments. And the past year has been a great run for equities. The benchmark Nifty index has more than doubled from its lows in March last year. That’s not a performance that’s oft-repeated by the market. And as they say, the tide lifts all boats. But some much more than others.

We discovered a list of stocks that are up 1000 percent since the end of last fiscal—and that’s in a pandemic year. The list is interesting. There are companies that are well recognized, of good pedigree, that have seen big corporate developments with implications for their future growth like CG Power (now an arm of Tube Investments) and Magma Fincorp (now in the Poonawalla fold).

There are also some with glimpses of promise or hints of changes in business trajectory. But also, several seem to be drawing attention without much to back such consideration.

Note: Some tail-end stocks have lost ground in the recent sell-off, after our initial study

Let’s take a closer look at some of these star return performers.

Bafna Pharma is an interesting candidate. The “pharma” fever seems to have clearly rubbed off on the stock. The company’s revenues have been on a steady decline from over Rs 185 crore in fiscal ended March 2014 (FY14) to just over Rs 43 crore in FY20.

But if we annualize its EPS for the year, we could end up with a number near Rs 2 per share. Even if it is twice that, at the current price of Rs 140, the future seems more than a little aggressively discounted for a company with revenues of under Rs 100 crore in sales. 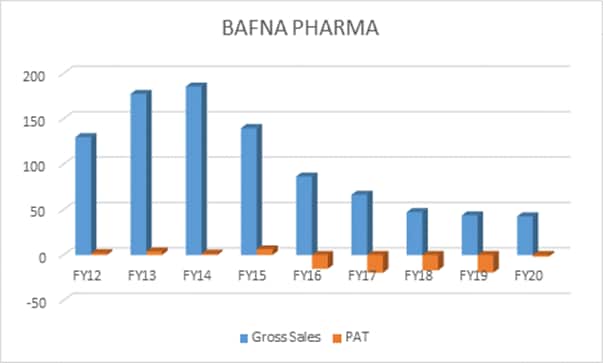 What’s more the other business latestone.com seems to show little traction. Its Alexa rank has slipped from 539,045 3 months ago to 663,352. This even as Croma.com’s rank has improved from 7,729 to 5,759. And if we look at just India rankings, Croma.com stands at 467 versus 105,725 for latestone.com. That’s a yawning and expanding gap. And we aren’t even comparing it with Amazon or Flipkart. So, leadership in this business is a far cry.

But let’s look at the numbers. Its revenues hit a peak of Rs 195 crore in FY09 and ended FY20 with Rs 46 crore. The profit of Rs 44 crore has turned into a loss of Rs 4.6 crore over the same period. It has, however, seen a recovery in the nine months of FY21, seemingly driven by pTron, with revenues of Rs 87 crore and profit attributable to shareholders of Rs 2.5 crore.

Assuming it meets its target of doubling sales of pTron in FY22, and further assuming that profits double, its annualized EPS would still be discounted 20x. That may not seem very pricey, but given its past track, one should be cautious. The other interesting company is Kellton Tech Solutions that draws a large chunk of its revenues from digital transformation business, quite like Happiest Minds. The issue with Kellton doesn’t seem to be about size, but growth, which has been absent the past four years.

What’s worrying is that in a year when most IT players saw big traction on the back of the big shift to digital, the company’s revenues have remained flat. The stark variance in trend growth with Happiest Minds is notable.

What does offer some comfort is the relative valuation. But a lot of that can change if growth doesn’t come through.

What’s more worrisome than some of these 1000 percenters are the penny poppers—what were till last year, below par value stocks, which have seen sharp gains sans any fundamental basis. Two among these that caught our attention are Crane Software and Ashima.


Crane Software interestingly owes Rs 387 crore to foreign bondholders and Rs 577 crore to local lenders, which has remained unpaid since 2009. There are also outstanding statutory dues like taxes and provident fund payments as well as FEMA violations.

What’s more, the Ministry of Corporate Affairs has called for the winding up of the company. The shareholding pattern and history are even more revealing. The promoters have only a 6.4 percent stake in the loss-making company, and most institutional investors like Goldman Sachs, Citigroup and Macquarie exited the stock between 2010 and 2012.

Yet, the stock has gained 550 percent since March last year and commands a market value of Rs 33 crore.

Ashima’s tale is less worrisome, but the valuation can be questioned. The company reported revenues of Rs 141 crore in FY21 compared to Rs 285 crore the year before. It also posted a higher Rs 11.5 crore loss than Rs 3.4 crore in the preceding year. It also saw an operating cash outflow of Rs 8 crore versus an inflow of Rs 4 crore in the previous year.

The cotton textiles company has plans to enter the realty business after having failed to make a go of its focus for many years. It is possible the company has land assets that can be monetized.

But just that is hardly a reason for investors to flock to the stock, which today boasts a market capitalization of Rs 373 crore after an over 600 percent gain in stock value. Time to be wary

Over-exuberance in the market is a clear signal to be wary. While no one minds seeing their wealth grow when markets are in a tizzy. The mood more often than not sours when the market turns turtle. So, be careful where you put your money in this frothy market.

1000 percent returns aren’t an everyday occurrence. If you’ve made such money or even a decent return, this could be a good time as any to lock some of it in, especially if you invested in companies that you won’t swear by.

The Home Depot - Deals, specials, and events to treat your dad