Analog Devices (NASDAQ:ADI) has been pulling the right strings over the past few quarters to bring its business into the fast lane, and the chipmaker’s fiscal 2021 first-quarter results indicate that its efforts have been paying off.

Let’s take a closer look at Analog’s latest quarterly performance, and see why the chipmaker’s newly found momentum is here to stay.

Analog Devices has officially stepped on the gas

The semiconductor specialist’s days of tepid growth are now officially over. Its revenue jumped 20% year-over-year to $1.56 billion in the fiscal first quarter that ended on Jan. 30, 2021. Adjusted earnings shot up 40% year-over-year to $1.44 per share. Wall Street expected Analog to earn $1.32 per share on revenue of $1.51 billion.

Analog’s impressive showing was driven by double-digit growth across its three biggest segments — industrial, communications, and automotive — which together produced 89% of the total revenue. The industrial business was the biggest gainer with a 24% year-over-year jump, and generated 55% of total revenue. The communications and automotive businesses clocked year-over-year growth of 16% and 19%, respectively.

The company has guided for revenue of $1.60 billion in the fiscal second quarter and adjusted earnings of $1.44 per share at the midpoint of its range. Again, that’s better than the Wall Street expectation of $1.39 per share in earnings on revenue of $1.55 billion. What’s more, Analog’s guidance for the current quarter means that it is on track to sustain its impressive growth momentum.

The company delivered earnings of $1.08 per share on revenue of $1.32 billion in the second quarter of fiscal 2020. At the midpoint of Analog’s revenue guidance range, the company’s top line would jump more than 21% year-over-year, while earnings per share are expected to jump 33%.

This is a welcome change from the poor performance that Analog Devices has been delivering over the past few years. The company faced difficult times in 2020, as factory shutdowns across the globe caused by the novel coronavirus pandemic hurt sales in the industrial and automotive sectors. 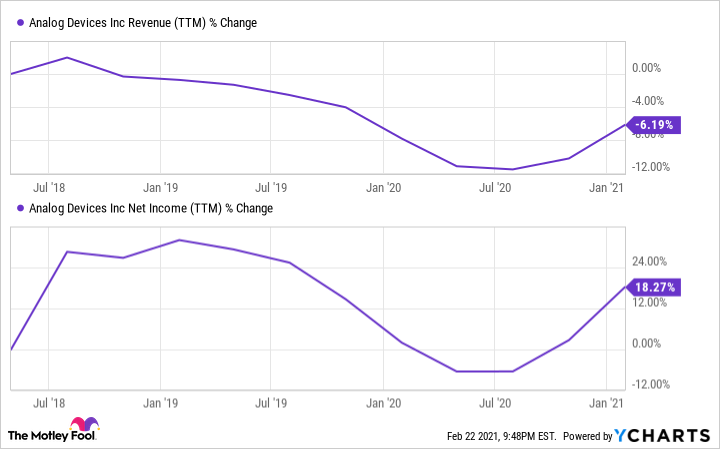 However, Analog was confident of a recovery in 2021, and it looks like it has finally arrived. More importantly, Analog Devices’ newly found momentum could turn it into a growth stock, as its top and bottom lines have room to run higher.

The key end markets that Analog Devices operates in are expanding at an impressive pace. The industrial business, for instance, is benefiting from the increased appetite for automation. Analog Devices management pointed out on the latest earnings conference call that the installed base of industrial robots could jump by 60% over the next five years. The chipmaker offers a host of products for the industrial automation market encompassing several applications, including connectivity, power consumption, sensing, and others.

The company claims that it can reduce the energy consumption of a motor used in an industrial robot by 40%. Such advantages could help Analog Devices build a strong customer base in the industrial semiconductor business, which looks set for secular long-term growth — increasing industrial automation in a post-COVID world is expected to drive the global industrial semiconductor market’s revenue to $107 billion by 2027, more than double last year’s $49 billion.

Similarly, the automotive market is turning out to be a happy hunting ground for Analog, with the company benefiting from increasing usage of electronics such as driver assistance systems, collision warning, and virtual cockpits, among others. Meanwhile, the shift toward electric vehicles is also giving Analog Devices’ battery management systems (BMS) a shot in the arm.

Not surprisingly, the automotive semiconductor market is expected to clock an annual growth rate of 18% through 2026, according to Mordor Intelligence. As such, Analog Devices’ automotive business could continue to record double-digit growth rates in the future.

Buy the stock if you haven’t already

Analog Devices looked like a stock worth buying in December last year, and the good news is that it still looks like one. The company’s earnings are expected to keep getting better in the coming years given the tailwinds at its back. 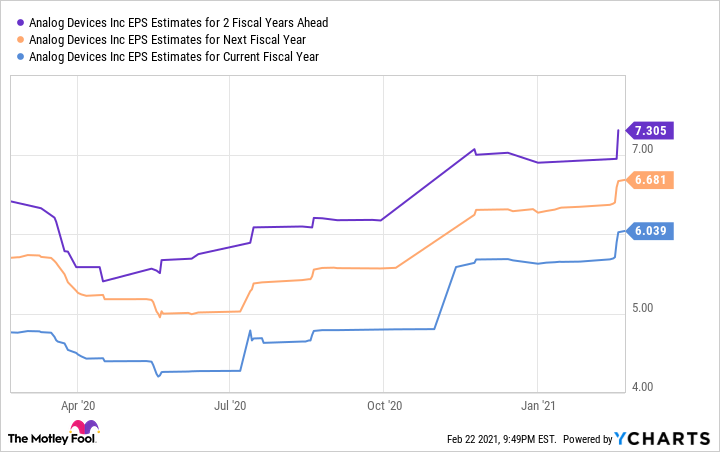 ADI EPS Estimates for 2 Fiscal Years Ahead data by YCharts

The stock is currently trading at 43.4 times trailing earnings, which is lower than 2020’s average multiple of over 45, and the forward earnings multiple of 27 points toward a stronger bottom line. Given that Analog Devices’ revenue and earnings are now growing at a better pace than last year, buying this tech stock right now may turn out to be a smart move.