The first-of-its-kind space exploration exchange-traded fund, Ark Space Exploration ETF (BATS:ARKX), is on the trading launchpad this morning. The interest has been building in the ARKX ETF and the 38 names that are in the portfolio payload. 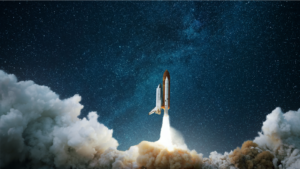 Some of those names are obvious for inclusion in the ETF with an investment theme of space exploration and innovation. Sponsor Ark Invest defines “space exploration” as “leading, enabling, or benefitting from technologically enabled products and/or services that occur beyond the surface of the Earth.”

That “obvious” group includes Lockheed Martin (NYSE:LMT), the portfolio’s seventh-biggest holding, at a 4.61% weight, and Iridium Communications (NASDAQ:IRDM), at 4.24% weighting in the No.  8 spot.

Yet others, like largest holding Trimble (NASDAQ:TRMB) at 8.61%, and even JD.com (NASDAQ:JD) at 4.93%, may leave investors wondering about a connection.

Let’s look at what Ark CEO and founder Cathie Wood and her team have put together.

So far, 2021 has been a good year for Ark, which has seen billions of dollars of fund inflows since the start of the year. As for Wood herself, she’s continued to be one of the most popular — while often challenged — fund managers, with a penchant for disruptive innovation, such as what she sees in Tesla (NASDAQ:TSLA) and Virgin Galactic Holdings (NYSE:SPCE).

Which brings us to TRMB stock, which Wood has included in her other funds, including ARK Autonomous Technology & Robotics ETF (BATS:ARKQ). Trimble has a water management software that uses satellites to help farmers, which plays on enabling space technologies. That’s a qualifying angle to be an ARKX stock.

Another sleeper is Kratos Defense & Security (NASDAQ:KTOS), which is the third-biggest holding in the new ETF’s portfolio, at 5.98% weight. As InvestorPlace contributor Chris MacDonald highlighted yesterday, Kratos has been a key player in advancing specific technologies relating to unmanned systems, satellite communications and combat systems.

This space “ride” won’t cost you as much as a seat on the SpaceX Dragon. With the exchange-traded fund’s 0.75% expense ratio, you’ll pay $75 in fees for a $10,000 investment. That’s more expensive than the 0.57% average across the entire fund industry, but several factors of 10 cheaper than the Dragon’s $55 million ticket.

On the date of publication, Robert Lakin did not have (either directly or indirectly) any positions in the securities mentioned in this article.

Slack Stock – More than 270 associates have left New York’s 10 most profitable law firms this year; where did they go?

The Home Depot - What’s causing the streak in my fog-free mirror?