News of Apple’s (NASDAQ:AAPL) big break into the autonomous vehicle (AV) market is now aiming the attention of investors at lidar stocks.

Lidar (light detection and ranging) is a technology that can act as the eye of a self-driving car, making it a crucial component for these kinds of vehicles. True, there is some debate as to whether lidar is the route to go for AV development. But auto companies both big and small have been experimenting with lidar in self-driving cars for some time now. The technology is still nascent, but Apple’s recent venture into the space has certainly cemented for some that it’s the future of the auto industry.

So, if you are looking to make some plays in lidar technology this year, here are four stocks that are well-positioned to disrupt the sector.

Innoviz is an Israeli-based startup that manufactures lidar sensors used in autonomous vehicles. Collective Growth is looking to “raise $100 million to $350 million” in order to fund the SPAC merger.

The partnership with Innoviz will help Collective Growth create a name for itself as one of the lidar stocks, with Innoviz being an emerging name for mass market lidar in the sector. In fact, the company already has existing partnerships with Magna (NYSE:MGA), Aptiv (NYSE:APTV) and others. Now with its newly formed merger with Collective Growth, Innoviz estimates its revenue to spike to $581 million by 2025. Both companies are still up-and-coming names, but this merger will catapult CGRO stock to new highs. 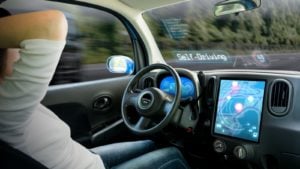 Another hot new SPAC deal hitting the market soon is Ouster’s reverse merger with Colonnade Acquisition Corp. Founded in 2015, Ouster has created what it refers to as “digital lidar,” an innovation that could make this pick stand out against the other lidar stocks.

This technology provides a high-performance lidar sensor at a cost-effective price. While traditional lidar solutions rely on numerous lasers and detectors, Ouster’s digital lidar only relies on three components — “a digital receiver, a laser array and a micro-optics system.” The product is also customizable, making it ideal for various sectors, from robotics to the automotive industry.

In terms of financials, Ouster’s merger with Colonnade is expected to add $300 million to Ouster’s bottom line. All told, the newly formed company will be worth an estimated $1.9 billion. Looking ahead, the company also predicts its revenue stream will rise by 140% up through 2025.

Given Ouster’s large addressable market and explosive potential gains, CLA stock is a great bet on the future of the AV market. 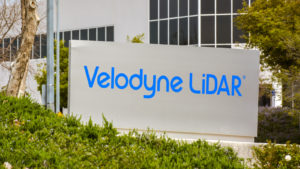 With the broader adoption of self-driving cars underway, Velodyne Lidar is among the top companies to benefit from the trend behind lidar stocks.

As a pioneer in the sector, Velodyne was one of the first companies to sell lidar sensors on the commercial market. What started out as a small yet novel invention for VLDR now leads an industry with a total addressable market (TAM) of $11.9 billion.

While lidar technology is currently associated most often with AVs, Velodyne’s solutions cater to sectors like 3D mapping, robotics and unmanned aerial vehicles (UAVs). With its broad range of solutions and strong position in the market, the company holds a major competitive advantage. Following the Dec. 21 Reuters report on Apple’s self-driving cars, VLDR stock jumped about 25%, closing the day at $24.68.

Last on my list of lidar stocks is Luminar Technologies, a close contender to Velodyne. While the company doesn’t hold a first-mover advantage in the space, it is still a major player.

How? LAZR technology caters to the mass market, in contrast to VLDR’s niche customer base. So, as more automakers experiment with autonomous vehicles, Luminar is well-poised to sign some long-term deals in the near future. For example, Volvo’s (OTCMKTS:VLVLY) next-gen vehicle is set to release in 2022 and will be the first consumer vehicle to use Luminar’s lidar sensors.

As for the numbers, LAZR stock has seen a strong rally since going public in early December. Looking ahead, the company has set some lofty growth targets for itself. Luminar expects to have generated $15 million in 2020 but estimates sales will reach a whopping $837 million by 2025. While this seems like an ambitious goal, the company has already secured long-term deals with companies like Intel (NASDAQ:INTC) and Daimler (OTCMKTS:DDAIF) to make it happen. On top of that, the potential growth of the AV market gives this pick plenty of future upside.

On the date of publication, Divya Premkumar did not have (either directly or indirectly) any positions in any of the securities mentioned in this article.

Divya Premkumar has a finance degree from the University of Houston, Texas. She is a financial writer and analyst who has written stories on various financial topics from investing to personal finance. Divya has been writing for InvestorPlace since 2020.

TTD Stock – 57 Percent of Southeast Asian Viewers are Now Streaming More OTT Video Content Because of COVID-19, According to New Research from The Trade Desk

TTD Stock - 57 Percent of Southeast Asian Viewers are Now Streaming More OTT Video Content Because of COVID-19, According to New Research from The Trade Desk