Home » Facebook Stock – Should Shareholders Be Concerned About The Stock-Based Compensation And Insider Selling At Palantir (NYSE:PLTR)?

• Palantir executives have been selling heavily

• The reliance on stock-based compensation could cause dilution

• If the high growth that is forecasted actually occurs, it would offset the dilution

When you see an insider selling their shares in a stock you own, it tends to raise eyebrows. Why would they sell if they truly believe in the company? Have they lost faith in the future? First impressions are concerning, but there can be legitimate reasons for selling other than a lack of optimism in the company’s future prospects.

Maybe that individual wants to buy a house, maybe they are too exposed to the company and want to diversify a little or maybe they are simply liquidating the stocks they’ve received as part of their compensation. There could be any number of reasons as to why, and it’s a case by case basis. We often forget that these executives are investors too, and they need to manage their wealth and risk accordingly, no matter how bullish they are.

However, when we see a company that has broad selling amongst multiple insiders and a stock-based compensation (SBC) structure that seems to favour management over shareholders, it can be a little bit more concerning.

Palantir (NYSE:PLTR) is one such company. The company has gained the spotlight for its industry leading data analytics capabilities and its high profile customer base, but less focus has been on its compensation method or executives disposals of stock. It’s worth looking into the amount of selling and the SBC because over the long-term, it can impact shareholder returns.

Insider selling has been heavy

The company went public in September last year via a direct listing instead of an IPO, and because of that there were no new shares issued. Instead, existing shareholders were able to sell their stock and executives were allowed to sell up to one-fifth (20%) of their shareholding. Many executives took advantage of this and sold a combined $440m in the first 3 days of trading (this includes selling by some investment firms where executives are beneficial owners).

More recently, after the company’s lock-up period expired (a period where insiders weren’t allowed to sell specific shares), even more shares were sold. This lock-up period ended 3 days after the company posted its 2020 full year results in mid-February and executives offloaded over $600m worth of stock in the following week ($504m of which was from related to investment funds where executives were beneficial owners, and won’t be included in the graph below).

We have the full breakdown of those insider sales over the last 12 months in our company report.

Reassuringly, these weren’t exactly panic sales. A number of them were either flagged in advance through 10b5-1 plans or were part of equity incentive plans (where executives receive stock as compensation).

For the 10b5-1 plans, these executives had organised to sell these shares in advance and it makes sense for them to occur shortly after the lock-up period expired, when they were finally allowed to. On top of those sales during the direct listing, some executives sold up to an additional 16% of their holdings, though many of these shares were received as stock-based compensation. Since the company has been private for 17 years, it’s not surprising that they now are making the most of the liquidity they have access to after being listed.

However, as for the equity incentive plans, we can’t just dismiss these transactions, because there’s more to it that concerns shareholders.

Although the company is large, and stock-based compensation is common amongst public companies, Palantir’s heavy reliance on this form of remuneration may be so much that it could hurt shareholder returns in the long run in the form of dilution.

The company appears to favour SBC over salary for all its employees, and thanks to the direct listing in 2020, the stock-based compensation expense increased five-fold from $241m in 2019 to $1.2bn in 2020. There’s likely a few reasons for Palantir to favour SBC over salary. Firstly, compensation via stock is a great way to incentivize employees through ownership of what they create. Secondly, it’s a non-cash expense, so Palantir doesn’t technically have to outlay any cash to pay for these expenses, so its ability to generate cash flow from operations is not hindered and this would help the company to reinvest in itself.

For example, below is how the top three executives’ remuneration was split, between salary, bonuses and stock awards for the year to December 2019.

However, this compensation method isn’t just for the executives. Most employees within Palantir reportedly receive similar structures: smaller salary but larger stock awards.

Because this SBC method involves the issuance of new stock, it’s increasing the number of slices in the pie. If a company is growing quickly enough or is large enough, this usually isn’t an issue. But we’ve seen a large increase with shares outstanding over the last year (581 million shares in December 2019 to 1.52 billion shares by December 2020 – thanks in large part to its direct listing) and the company’s 10-K indicates there could be more to come.

As at December 31 2020, there were 535m options outstanding with a weighted average remaining life of 8 years and an intrinsic value of $9.3 billion (Page 143). Those options equate to 34% of the current shares outstanding (December 2020) and if exercised, would dilute shareholders substantially.

If this method of remuneration is relied on too much, long term shareholders would see their percentage ownership of the company diminish due to the consistent dilution of their holding. However, the negative effect of dilution depends on how fast the company is or isn’t growing. If the size of the pie itself (the company) is growing more than the rate of dilution, then this dilution won’t be as harmful.

From that standpoint, Palantir’s future prospects make the dilution seem less intimidating. The forecasted annual earnings growth over the next year is 67% (which then moderates out to 2025), but it’s still much higher than the expected rate of dilution of around 4% per year. 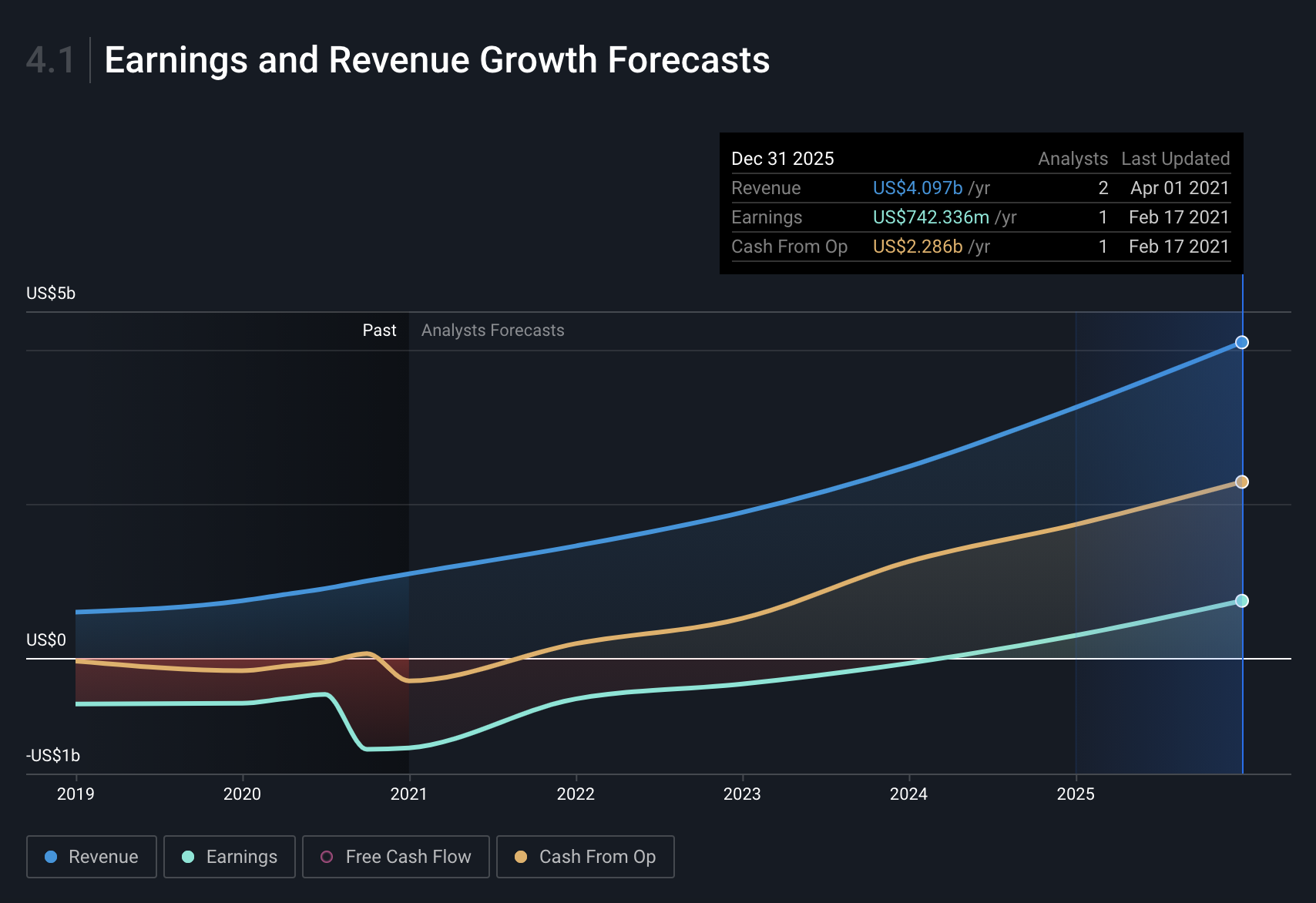 What this means for investors

Stock-based compensation is a common form of remuneration and has its place, when used appropriately. The large amounts of insider selling since the IPO can be attributed to this method and the fact that the company has been private for 17 years. While dilution is a concern, it appears somewhat contained by the fact that the company is expected to grow at a rapid rate that, if achieved, will more than offset the new shares expected to be issued in the coming years. With that in mind, while insider selling and SBC are important factors to keep an eye on, especially for a company like Palantir, they don’t appear to be huge concerns at this stage.

This article focused on insider selling and compensation, but it didn’t go in-depth on the company’s future. If you’d like to check out our full analysis of Palantir’s future prospects, you can find them within our company report.

Simply Wall St analyst Michael Paige and Simply Wall St have no position in any of the companies mentioned. This article is general in nature. It does not constitute a recommendation to buy or sell any stock and does not take account of your objectives, or your financial situation. We aim to bring you long-term focused analysis driven by fundamental data. Note that our analysis may not factor in the latest price-sensitive company announcements or qualitative material.

Have feedback on this article? Concerned about the content? Get in touch with us directly. Alternatively, email editorial-team@simplywallst.com