Home » Gamestop Stock – CHPT Stock: Could ChargePoint Be the Next GameStop?

Shares of ChargePoint (NYSE:CHPT) are down more than 8% at the time of writing on heavier-than-usual volume. Investors appear to be taking profits on CHPT stock after a rather incredible run of approximately 40% from last month’s lows. 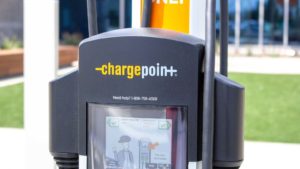 Other major EV stocks and charging infrastructure plays are down today on risk-off sentiment. With bond yields coming off of 14-month highs of late, and President Joe Biden’s American Jobs Plan still at play, some have questioned the recent downside momentum.

Among those who believe there could be a trade amid this volatility is Will Meade. The popular trader has suggested via Twitter that ChargePoint could be the next GameStop (NYSE:GME).

That’s right. Mr. Meade’s tweet suggests the following catalysts could provide for an interesting trade for investors in CHPT stock:

Question, Could $CHPT be the next Gamestop $GME?
1) $CHPT is now the most shorted stock with 86% of its float short.
2) $CHPT is the largest EV charging network in the world.
3) Siemens, BMW and Daimler are investors in $CHPT
4) Biden is prioritizing EV’s and charging stations

Here’s my take on this intriguing perspective.

Volatility in CHPT Stock Could Provide Impetus for a Trade

I do agree that there’s likely a trade here for interested investors.

Indeed, CHPT stock has been very volatile of late. I don’t expect that situation to change. Volatility is a trader’s best friend, so I expect those who are right with respect to the directional movement in CHPT stock will make a ton of money.

I also have to agree with the the premise that there’s the political will (and investment dollars) to see charging stations grow in the U.S. Biden’s plan includes a road map to getting to half a million charging stations in the next few years. Such a plan will rely on incredible growth driven by companies like ChargePoint.

I’m also a bit concerned with valuations across the EV charging space today. I do think that a reasonable correction and some profit-taking is healthy for such stocks right now. Yes, the growth potential companies like ChargePoint can potentially provide is massive. However, investors also need to consider the fundamentals when making investment decisions.

Accordingly, as a conservative, long-term investor, this is a stock I’m going to steer clear of, as a direct result of the near-term volatility I expect to see in CHPT stock. However, those looking to trade ChargePoint right now certainly have another element to consider with this thesis.

On the date of publication, Chris MacDonald did not have (either directly or indirectly) any positions in the securities mentioned in this article.

Netflix Stock – What Are Analyst Opinions Regarding Netflix Inc. (NFLX)?

AMD Stock – If You Bought Advanced Micro Devices In 2001, Are You Smiling?

Nasdaq TSLA - Tesla: Not As Expensive As It Might Seem