THIS year is looking to be a good one for horsepower enthusiasts, with both Ford and General Motors bringing out new iron-block engines with serious performance potential. Last month we gave you a rundown on Ford’s new 7.3-litre Godzilla V8, a 430hp iron small-block used in the F250 truck range, so this time we shine a light on GM’s new L8T.

GM apparently decided its heavy-duty 3500-series pick-up trucks needed more towing capacity than what the 360hp, 6.0-litre L96 V8 could provide, so a larger-capacity engine has been developed off the 6.2-litre L86 V8 used in 1500-series trucks.

Given the 2021 Chevy Silverado 3500HD rocks a claimed tow capacity of 36,000lb (that’s 16 tonnes in modern scales), we reckon the Bowtie brigade might have knocked it out of the park.

The new motor features Gen V small-block architecture, which has been used in America since the 2013 introduction of the C7 Corvette. It retains the 4.4-inch bore centres, 9.240-inch deck height and 4.065-inch bore diameter of the L86, but GM engineers have stretched the stroke out from the 6.2’s 3.62 inches up to 3.86 inches, which gives us a capacity of 401 cubes (6564cc in the new money).

Retaining the same external dimensions as LT and LS engines, the L8T should fit anywhere a late-model GM small-block could. There are minor mounting differenaces to take care of between LS and LT mills, however, so don’t expect existing mounts for Gen III and Gen IV donks to work perfectly

With hard, high-load work in its future, the L8T runs a forged crank and forged powdered-metal rods, while the pistons remain hypereutectic in construction. This hardware and the lower compression ratio are crucial, because GM designed the mill to survive those hardcore towing loads on base 87-octane (MON) fuel. 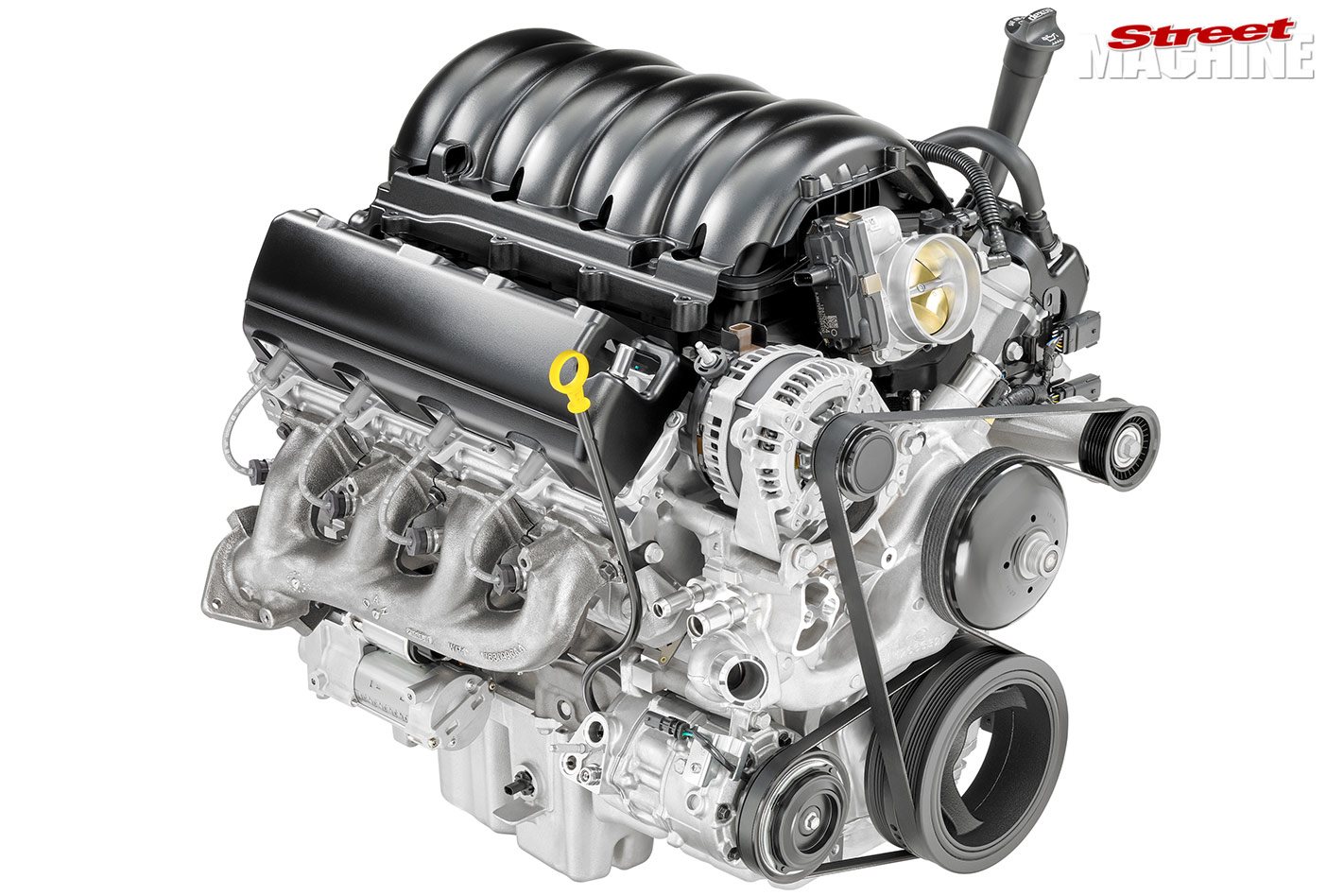 If you are buying an LT-series mill second-hand, be prepared to either buy or relocate some accessories. Many LT swappers find the low-mounted air conditioning compressor fouls on swap mounts, and the late-model LTs don’t come with power steering pumps, so you’ll need to convert to a hydraulic-electric pump like the common TS Astra swap, or go with an aftermarket front-drive kit

Assembled in Tonawanda, New York, the L8T runs a 1-8-7-2-6-5-4-3 firing order, along with many of the Gen V small-block technologies like direct injection and variable valve timing. Interestingly, active fuel management (also known as AFM, dynamic fuel management or displacement on demand) will not be offered in the L8T, which will be a source of relief for anyone whose LS has smashed a roller lifter and cam through a displacement-on-demand failure.

The cylinder heads are apparently the same aluminium castings as found on other Gen V models, but we don’t yet have any specific details on valve and port sizes. However, the larger bore size offers GM an opportunity to push the valve sizes up from the existing 2.126-inch intake and 1.590-inch exhaust used in the 6.2-litre LT1 and L86. 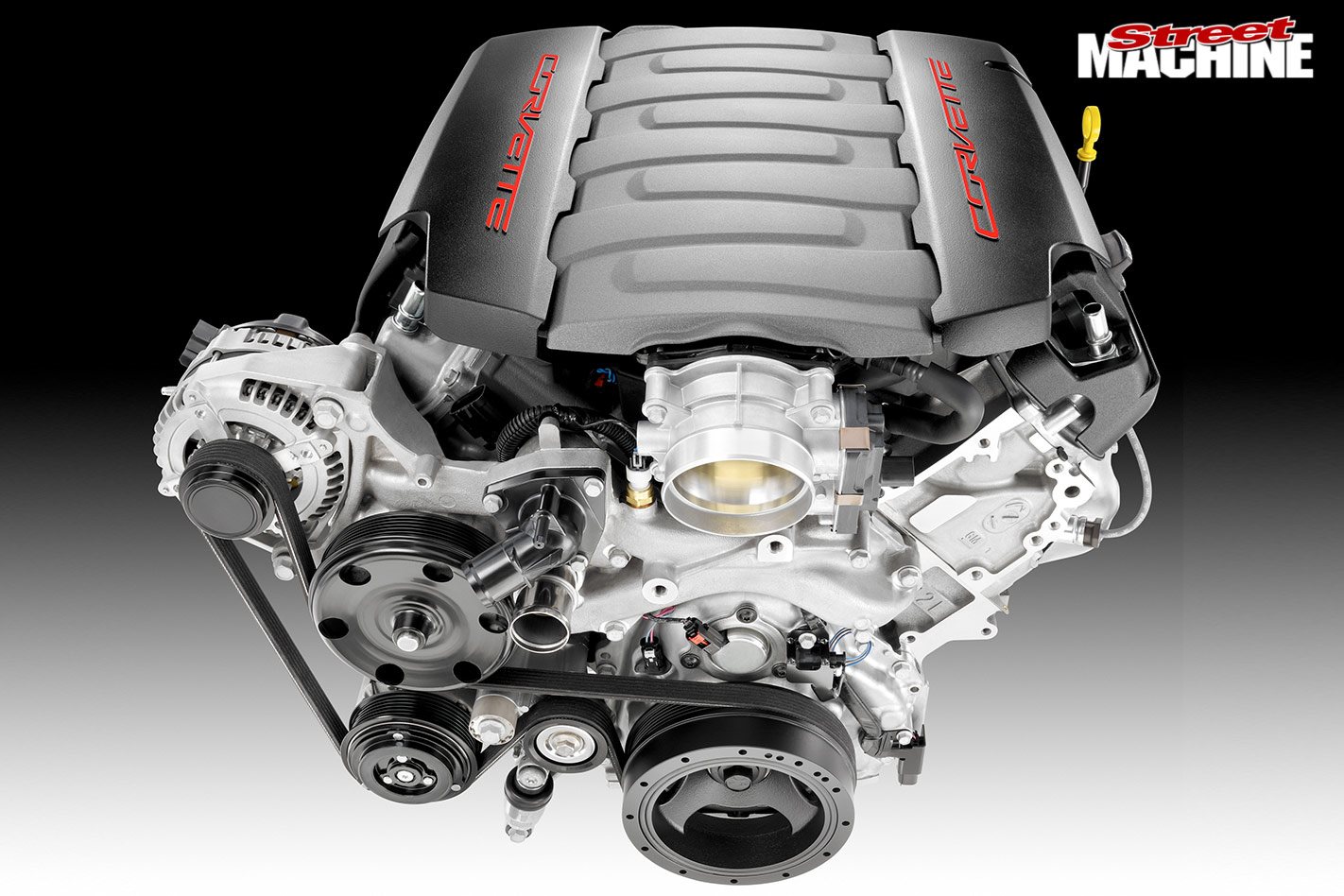 Fitting a traditional auto trans to any LT engine is the same job as with an LS, including swapping the stock flexplate for an eight-bolt aftermarket item. It gets tricky if you want to run a manual ’box behind the 5.3L L83; the 6.2 cranks are machined for an input shaft but the L83’s isn’t, so you’ll need a spacer to fit between the block and bellhousing, as well as a large-size 2010 Camaro pilot bearing

If the L8T retains the meaty cylinder walls found on other GM small-blocks, then pushing out to a 4.125-inch bore would net 412ci (6.75 litres) without compromising durability, while also being a more budget-minded combo and improving the factory compression ratio. As with nearly all truck-spec GM motors, however, the biggest gains are sure to come from swapping to a cam designed for horsepower rather than million-mile tow rigs.

The deep-skirted iron block, six-bolt mains, variable-rate oil pump and direct-injection set-up all point to the L8T being an excellent foundation for big-banger, late-model small-block builds. Thankfully, heavy-duty pick-up truck parts are not normally super-expensive to purchase second-hand or as spare parts. 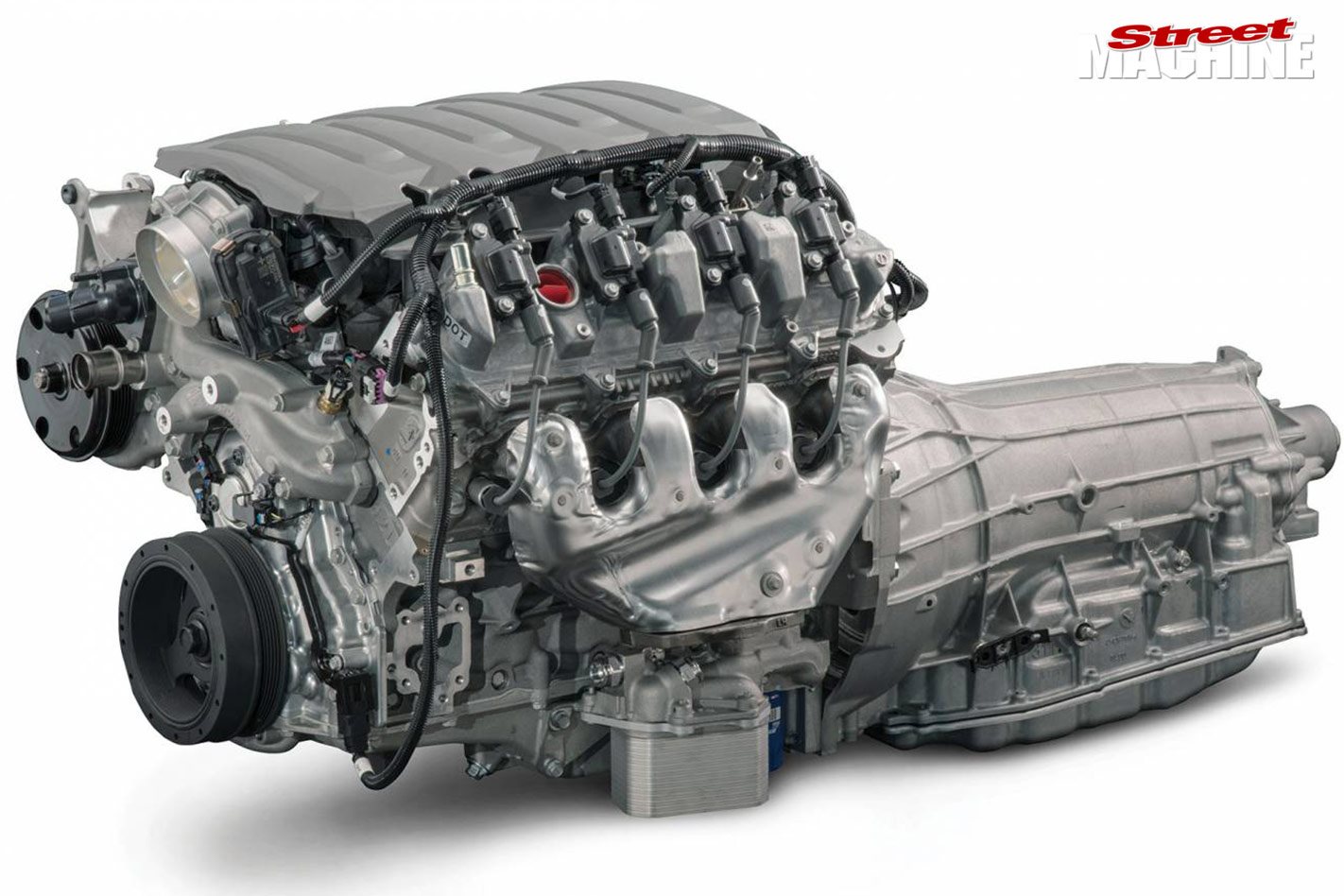 Chevrolet Performance now offers the aspirated Gen V LT1 (pictured) and blown LT4 and LT5 as crate engines, and as part of its Connect & Cruise line. As well as a crate engine, the Connect & Cruise kits include a wiring loom, ECU, accelerator pedal, trans controller and transmission set-up, and are ready to be swapped straight into street machines

GM has already released the bare L8T block through Chevrolet Performance as a spare part, retailing for approximately AU $2250 under part number #19420904. The crate motor arm of General Motors is touting the L8T as the perfect base upon which to build ultra-high-performance Gen V mills, and there are rumours that GM may even use the iron L8T as the basis for an upcoming COPO Camaro factory drag pack model. 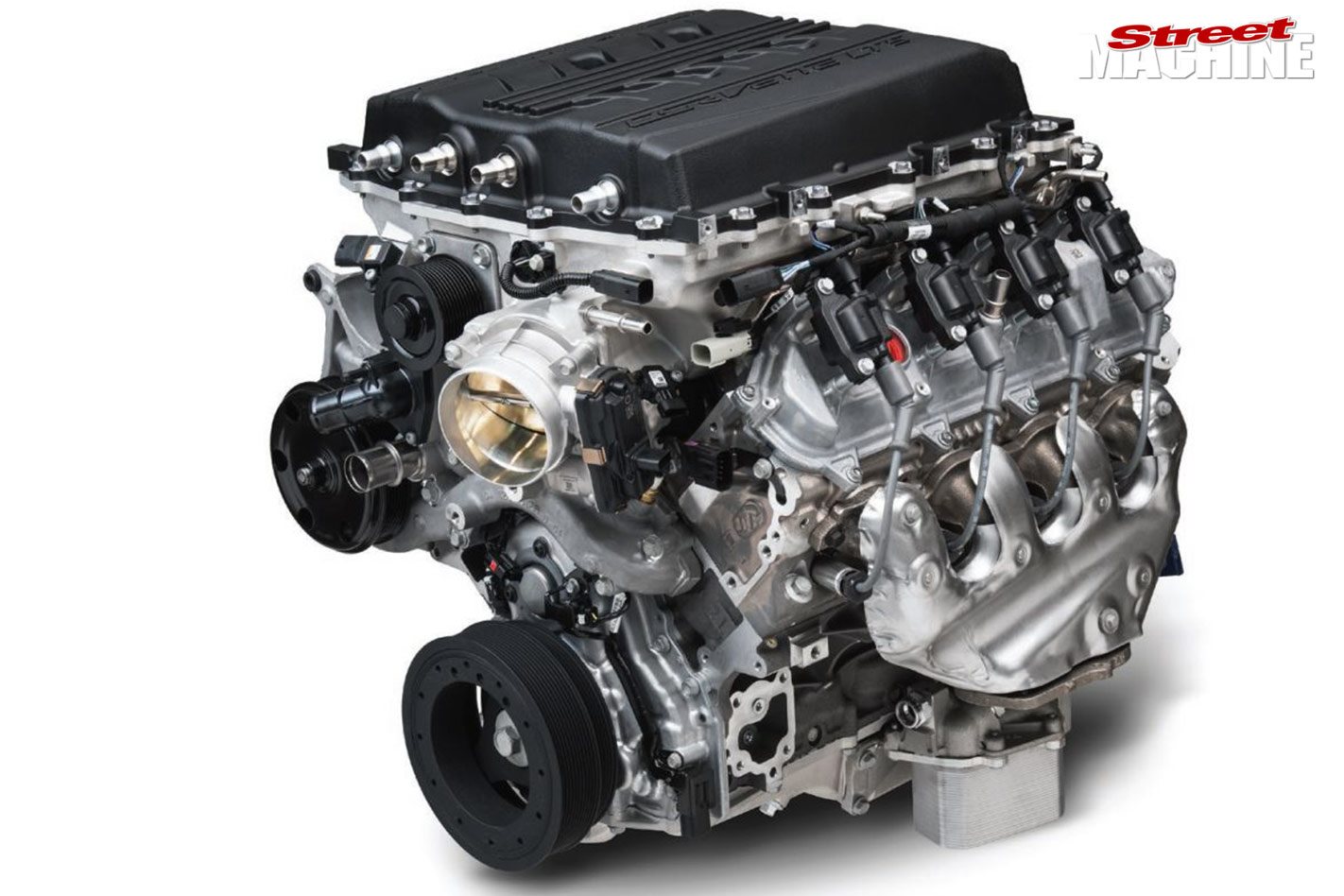 At 755hp, the LT5 is the highest-horsepower engine Chevrolet has ever offered in a production vehicle, thanks in no small part to the TVS2650 supercharger perched atop the valley plate. So big are the lungs on this bad boy that GM engineers had to add eight extra port injectors to the intake manifold to handle the LT5’s thirst at high loads!

WHAT’S IN A NAME?

READING any story about late-model GM engines can be confusing, what with all the random names that get slapped on the company’s mills. While Ford USA has the Godzilla, Coyote, Voodoo and Panther, and Mopar has the Hellcat range, GM persists with LT1, LS4, LQ9, LY6 and 6512 other random alpha-numeric codes.

These codes date back to 1970, when General Motors departments introduced Regular Production Order (RPO) codes to differentiate parts in their inventory and as a way to spec out cars. Some of these RPOs became famous among gearheads when used for performance models – think Z28, ZR1, L88, LT1, LS6 and others.

When it comes to late-model GM V8s, the entire family of Gen III and Gen IV donks are often lumped into the ‘LS’ bucket, despite their many differences. So are these Gen V small-blocks just another bunch of V8s to chuck in there, too? No, not at all! 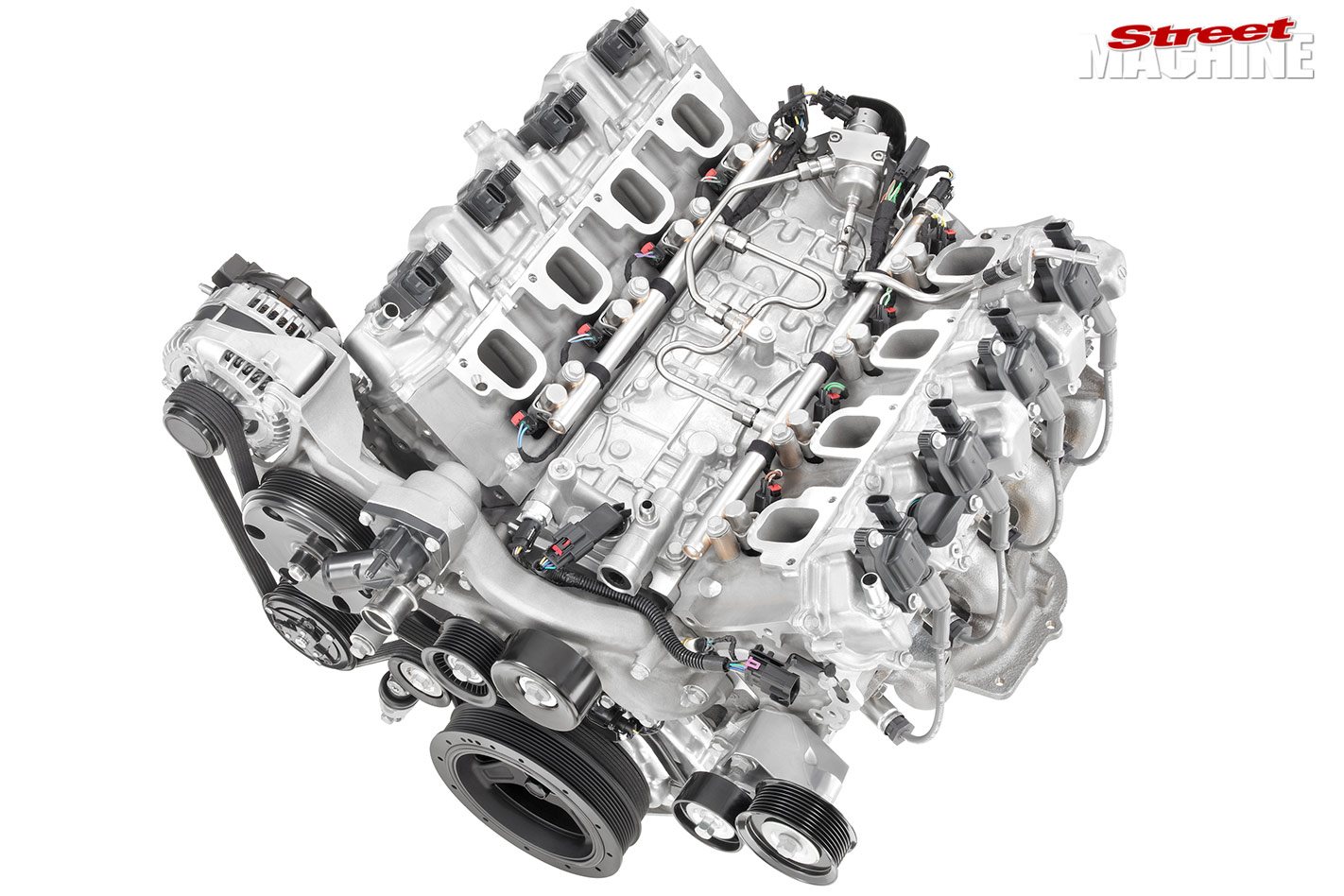 The Gen V’s direct-injection EFI, as pictured here from a supercharged LT4, runs as a dead-head system using an in-tank pump, plus a mechanical pump driven off the camshaft, with injectors mounted in the cylinder head. The ECU controls the whole show using a pulse-width modulation (PWM) system, and many high-end aftermarket ECUs, like Haltech’s new Nexus R5, can control PWM-style set-ups

The Gen V mills, including LT1, LT4, LT5 and all the pick-up truck engines discussed in this story, all belong to the new direct-injected LT-series family, so they share almost no crossover parts with the previous Gen III and IV donks.

The other car-based LT engines are supercharged performance monsters, with the 650hp, 6.2L LT4 usurped as the most powerful engine Chevrolet sells when the 755hp, 6.2L LT5 was unveiled in the C7 Corvette ZR1.

Stock Market News – 15 EV and AV Stocks Are Getting Added to the Russell 3000. Why It Matters.