I want to take a few words to remember those who made the ultimate sacrifice. Without them, we wouldn’t have the privilege of living in the greatest country in the world. And to all the military families and veterans out there, we thank you.

I come from a military family (go Navy!). My great grandfather left Princeton to drive ambulances for the French army in World War I and then fought in the American trenches. Two more of my great grandfathers fought in the British trenches. Several of my great uncles fought in World War II (for the British and Americans), including one in the SAS who landed on D-Day and one who was shot down over the Pacific but luckily parachuted to safety. My grandfather served during Korea, and two more great uncles were in Vietnam. My father and uncle are retired Navy, and one cousin is currently in the Army. My ancestors even fought in the Revolutionary War; one was a general.

So I’m indebted to the hard work, dedication, and sacrifice of those in the armed forces. Let’s all be safe and enjoy ourselves on this hard-earned day off.

Now, while you’re soaking in the sun and sipping your margarita, I’ve got some big and profitable ideas for you to digest…

I just returned to Baltimore from a closed-door gathering of some of the brightest minds in the investing world. And I even found a familiar face in the crowd. More on that in a bit…

There were some bold predictions at the investment summit, including a call for Dow 111,180 within the decade. It sounds shocking at first, but the Dow would need to rise only 227% from current levels. With the market we’ve seen over the last decade, I don’t think that prediction is far off.

It’ll be a bumpy ride along the way… You can count on that.

But a seminal reason for the historic rise of the Dow is the retail investor revolution, otherwise called “stockflation” (i.e., savers can’t get a decent return in their bank accounts, so they’re putting their money where it will grow the most… the stock market).

It’s a great time to be an investor, and we’ll help you find the best opportunities as the economy reopens, new forms of income arise, and green technology expands.

We’re getting so close to the economy reopening that we can taste it. The masks are coming off, folks!

And one sector of the post-COVID-19 economy we discussed at the summit that I’ve had my eye on for some time is the entertainment industry. This includes companies like MGM (NYSE: MGM), Madison Square Garden Entertainment (NYSE: MSGE), Sony (NYSE: SONY), and AMC (NYSE: AMC).

What happened the day after our brainstorm on reopening plays?

Amazon announced it’s buying MGM for $8.45 billion, the second biggest deal in the company’s history behind the $13.7 billion Whole Foods Market acquisition in 2017.

Our timing couldn’t have been more perfect.

Now, I was one of the first to see the value in this sector five years ago. Then the pandemic hammered it down further. So I knew that AMC was a bargain when it was trading around $2 at the start of 2021. It’s since gone on a more than 1,400% run year to date as of this writing.

While GameStop (NYSE: GME) and AMC short sellers have lost $8 billion betting on the downfall of these companies, a $1,000 investment in AMC at the start of the year would now be worth $15,000. Add options on top that and you’ve got yourself a hefty retirement fund.

These are the kinds of trades I’m dying to bring you, and we’re working hard to get them into your hands soon.

Entertainment stocks will only keep heating up this summer as people start going back to concerts and movie theaters. And as travel picks up (flights are fully booked these days), carbon emissions are on the rise as well.

We’re on the cusp of a clean energy future, and carbon neutrality is going to play an essential role in it, but investors aren’t sure where to park their money.

As negotiations continue over the Biden administration’s infrastructure bill, we’re seeing a massive push for clean energy, and carbon credits are a big part of the president’s plan.

Biden said he wants carbon-free electricity by 2035 and net-zero energy by 2050. Those are lofty goals, but many companies and consumers are already on board.

But it’s unlikely these big corporations are going to dramatically alter the amount of energy they use and carbon they produce, so they’re turning to the carbon credit system, where they can purchase “credits” that offset their carbon footprints.

Billions of dollars change hands in the carbon credit system each year, so we know there’s money to be made.

An old colleague turned me on to this back-door play on the clean energy revolution that you’ve probably never heard of… Universal Carbon (UPC02).

It’s the first-ever carbon credit built on the blockchain, the technology behind cryptocurrency. Think of the blockchain like an open ledger, where every electronic transaction is visible.

I know what you’re thinking… You don’t want to touch crypto with the recent drop in prices across the board. But I’d argue that makes it the perfect time to jump in (crypto has since stabilized this past week). And as long as the government keeps dropping helicopter money from the sky and maintaining ultra-low interest rates, crypto will remain an appealing investment.

As it’s been plagued with fraud, the double counting of credits, and regulatory and accounting problems, the current system needs decentralized transactions viewable on an open ledger (the blockchain) to combat these flaws.

The blockchain solves this problem because the system won’t be regulated by governments and their corrupt leaders. Every transaction is visible on the blockchain, so there’s less risk of fraud.

I find this concept fascinating, and if you want to dig deeper, go to Universal Carbon’s website. Follow the instructions when you’re ready to buy. UPC02 is trading for less than $10, which could be a bargain when large companies start buying it up.

You’d essentially be getting paid by selling carbon credits to Amazon or FedEx. How’s that for sticking it to those big corporations?

As an Outsider, you deserve the education and tools necessary to feel comfortable investing, so we’re making an effort to give you more.

Here’s a pro tip for today’s markets: There’s one consistent and accurate indicator you can follow to tweak your portfolio when necessary.

It’s called the CBOE S&P 500 Volatility Index, otherwise known as the VIX. The index tracks the volume of call and put options on S&P 500 stocks to project 30-day volatility expectations. 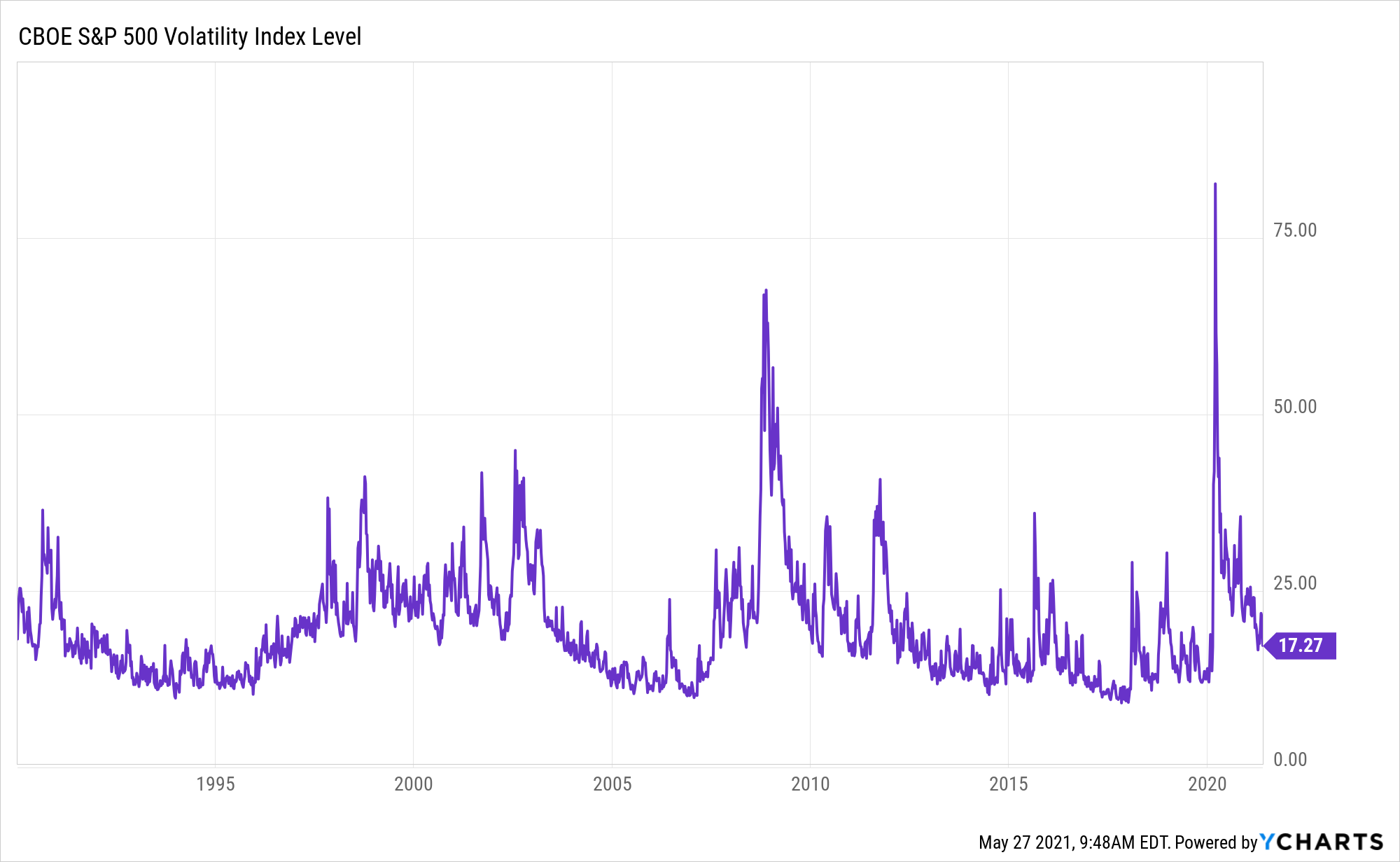 So how do you use this to your advantage?

Well, it may seem counterintuitive, especially if you’re seeing your investments imploding, but when the VIX is high, you should buy stocks because the index never stays elevated for long. And when the VIX drops, stocks rise.

So take a look for yourself, and we’ll be bringing you more investment education in the future. We love doing it.

You know that feeling when you meet someone for the first time but swear you recognize them from somewhere?

I had that experience last week at the investment summit when I was discussing the markets with Jason Williams from The Wealth Advisory.

We both recognized each other and swore we had met in the past. It turns out we have close family ties, and I’m thrilled to now call him my colleague and friend.

Jason is a master stock picker who has led his readers to market-beating returns for more than 14 years.

So when he mentioned the company behind a new battery technology that’s 10 times more powerful than Tesla’s, I leaned in.

This company is producing what Jason calls “Electric Glass,” which is already being used by Volkswagen, General Motors, Ford, and governments around the world.

It’s the next step in battery technology, and this company has a virtual monopoly on it.

So if you want to get in on the ground floor of the company taking over the electric vehicle market, you need to hear what he has to say.

After Alex’s passion for economics and investing drew him to one of the largest financial publishers in the world, where he rubbed elbows with former Chicago Board Options Exchange floor traders, Wall Street hedge fund managers, and International Monetary Fund analysts, he decided to take up the pen and guide others through this new age of investing.

P.S. Once the public catches on to the multitrillion-dollar potential of “Electric Glass,” this company’s stock could skyrocket faster than Tesla’s. But you need to get in early to secure your stake. Get all the information you need here.