Inovio Pharmaceuticals (NASDAQ: INO) started the coronavirus vaccine race on the right foot. Investors cheered last spring when the company became one of the first to bring a coronavirus vaccine candidate into human trials. And then Inovio lost steam. Some investors were disappointed by a lack of detail in the phase 1 clinical trial report. Later in the year, the U.S. Food and Drug Administration (FDA) placed a partial clinical hold on its phase 2/3 trial.

Inovio is no longer a leader from a timeline perspective. Pfizer (NYSE: PFE) and Moderna (NASDAQ: MRNA) have brought vaccines to market. And Johnson & Johnson (NYSE: JNJ) and Novavax (NASDAQ: NVAX) are requesting regulatory authorization. Meanwhile, short-sellers are betting that shares of Inovio — up more than 56% since the start of the year — are going to fall. Are they right?

Let’s take a look at the timeline first. Inovio launched its phase 2 study in early December 2020. At that time, the FDA lifted the partial clinical hold on phase 2 but maintained it on the phase 3 portion of the trial.

The FDA originally initiated a partial hold because it had questions about the phase 2/3 study and Inovio’s administration device, which is called Cellectra. The handheld device uses electrical pulses to deliver Inovio’s vaccine candidate into skin cells. Inovio has said it will answer all of the FDA’s questions during the phase 2 portion of the trial. The FDA has 30 days to issue a response from that point. Even if both parties make an effort here, the big risk is that the hold will delay the start of phase 3.

Inovio hasn’t provided an update. But we may expect more news when the company reports earnings on March 1.

On a brighter note, Inovio reported T-cell responses in 100% of volunteers in the higher dose group. T-cells, known for killing infected cells, recognized various parts of the spike protein. The spike protein is what the coronavirus uses to infect healthy cells. Safety data was another positive. Inovio reported no serious adverse events.

At this point, Inovio’s results don’t look as strong as those of its more advanced competitors. Inovio is lagging behind from a timeline and data perspective. But new data could still save the day, in two ways: If the T-cell responses prove to be as important as neutralizing antibody levels, and if the vaccine can handle new strains. Phase 2 information should offer us a clearer picture.

Finally, one other feature may help bring Inovio’s vaccine to the forefront. It may be kept at room temperature for more than a year. This is a big plus when it comes to storage and transportation. By comparison, Pfizer‘s vaccine must be kept at freezing temperatures and Moderna‘s requires refrigeration.

The ride has been bumpy for Inovio so far. And risk remains high. But if the FDA lifts the partial clinical hold and phase 2/3 data are strong, Inovio still may have a chance to carve out a spot in the coronavirus vaccine market.

So, what are the short-sellers saying? Short positions make up about 21% of Inovio’s float. That’s a decent percentage of investors betting on the stock’s decline. But that’s actually down from a peak of nearly 36% a few months ago. (In short selling, investors borrow shares to sell at the market price. They then must buy them back later — hopefully at a lower price — to return to the original lender.) 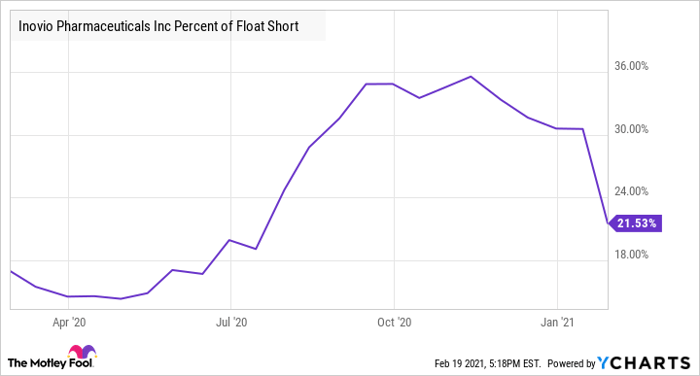 Investors may be regaining confidence in Inovio. Ultimately, though, short-sellers won’t determine what happens with Inovio’s stock. The clinical trial results will. Until Inovio reports more data, it’s best to be cautious. But, considering the positive points I mentioned above, we might do so with a bit more optimism than several months ago.

10 stocks we like better than Inovio Pharmaceuticals
When investing geniuses David and Tom Gardner have a stock tip, it can pay to listen. After all, the newsletter they have run for over a decade, Fintech Zoom Stock Advisor, has tripled the market.*

David and Tom just revealed what they believe are the ten best stocks for investors to buy right now… and Inovio Pharmaceuticals wasn’t one of them! That’s right — they think these 10 stocks are even better buys.

Wallmart Stock – McDonald’s is leaving Walmart, and Walmart is looking for new options

VOO Stock – Why Do the Wealthy Pay Such Low Taxes?

BYND Stock – Bear Of The Day: Beyond Meat (BYND)

Wallmart Stock - McDonald's is leaving Walmart, and Walmart is looking for new options