Home » MSFT Stock – 3 Stocks to Build Your Portfolio Around

When looking for stocks to build a portfolio, investors should look for a plausible path to long-term expansion at a reasonable price. However, investors do not have to overpay or settle for meager growth to find such companies. BJ’s Wholesale (NYSE: BJ), International Business Machines (NYSE: IBM), and Innovative Industrial Properties (NYSE: IIPR) can provide both the portfolio diversification and the potential returns needed to grow one’s portfolio without excessive risk.

BJ’s operates 221 warehouse clubs in the Eastern U.S. However, it differentiates itself from peers like Costco and Walmart‘s Sam’s Club by a hybrid approach with groceries. BJ’s emphasizes fresh foods and offers smaller package sizes than its direct peers.

Moreover, BJ’s was one of the few companies changed for the better by the pandemic. Once a heavily indebted, slow growth retailer, the pandemic brought record sales. Revenue in 2020 surged by 17% from 2019 levels, and net income rose by 125% over the same period.

The company also reported $676 million in free cash flow, an increase of 276% from 2019 levels. With this cash, BJ’s paid down $574 million of its obligations, taking total debt to about $1.1 billion. Not only did this reduce interest expenses by 22%, but it also gave the company a positive value after subtracting liabilities from assets. This value, also called stockholders’ equity, now stands at more than $319 million.

The rise in sales helped BJ’s stock rise by approximately 75% over the last 12 months. Despite this increase, it trades at about 15 times earnings. In comparison, Costco sells for 37 times its earnings while Walmart’s P/E ratio stands at about 30. This makes BJ’s a relative bargain in comparison.

However, BJ’s did not provide forward guidance, suggesting that the company’s not sure how it’ll perform if pre-pandemic buying patterns return. Still, the lower debt levels permanently improved BJ’s business by freeing capital for store improvements and expansion. This should lead to more rapid growth and higher revenues over time.

IBM appears positioned to reverse years of decline as it makes a major transition. It has started spinning off what it now calls NewCo, its managed infrastructure services business, into a separate company. IBM expects to execute the spinoff later this year.

IBM will continue to build supercomputers, operate IT systems, and provide financing. However, the emerging growth driver in the company has become the hybrid cloud.

Hybrid clouds allow public and private clouds to interact. All major cloud companies offer hybrid cloud services, and for now, IBM makes up less than 2% of the cloud infrastructure market, according to Kinsta.

Still, IBM stands out with a default architecture designed to address compatibility and complexity issues that can come with hybrid clouds. The efficiencies created by such a system could give IBM a competitive advantage over the likes of Amazon‘s AWS and Azure, Microsoft‘s cloud platform.

The split also could help NewCo. Revenue has fallen in the global technology services to which NewCo now belongs. Nonetheless, NewCo will retain a $62 billion backlog. With a management team focused exclusively on this business, it has a chance to reverse this decline.

The separation cannot come too soon. IBM had a terrible quarter, experiencing a 5% revenue drop for 2020 over a 12-month period. This occurred despite cloud revenue growth of 19% over the same timeframe. The company blamed shifting buyer behavior amid the pandemic for the overall drop.

Nonetheless, the spinoff offers hope for IBM. CEO Arvind Krishna, who spearheaded the IBM cloud before he took the CEO position, estimates that company revenue will increase by mid-single-digits after the spinoff occurs.

Investors seemed to have turned optimistic. The P/E ratio, which struggled to move higher than 15 before 2021, has now risen to about 22. Still, it remains well below Microsoft’s 37 earnings multiple.

Also, IBM’s $6.52 per share annual dividend yields about 4.9%. IBM and NewCo pledged to split this dividend and have committed to its future growth. Since yearly cash flows of $10.8 billion easily cover the $5.8 billion annual cost of the payout, continued increases of the overall payout remain likely.

Admittedly, uncertainty remains as IBM has not spelled out many financial details about the spinoff, such as splitting the dividend. Also, it does not make up a significant percentage of the market for now. Still, investors will soon own an IBM with a heavy cloud focus and a NewCo focused exclusively on its backlog. This will leave investors with two tech companies that could potentially anchor a portfolio.

Innovative Industrial owns properties set aside for cannabis production. However, rather than existing as a “marijuana company,” it instead operates as a real estate investment trust (REIT), earning revenue exclusively from property leasing.

This provides several competitive advantages. Since it does not grow cannabis, it does not face Schedule I restrictions, rules that make weed illegal at the federal level. Thus, it profits from the marijuana boom without that obstacle.

Moreover, Schedule I restrictions make producers ineligible for bank loans. This benefits Innovative Industrial, since it can buy a producer’s property and lease it back to the former owner. This approach provides producers with financing while giving Innovative Industrial an income stream and an avenue for acquiring more properties.

Innovative Industrial’s growth and its 100% occupancy rate seem to confirm this industry expansion. In fiscal 2020, revenue of $117 million came in 162% higher than 2019 revenues. This led to $64 million of net income, a 191% surge over the same period. Adjusted funds from operations income, the cash brought in after adjusting for capital improvements, came in at $98 million, a 180% increase from year-ago levels.

As a REIT, it must pay out at least 90% of its net income in dividends. However, thanks to the massive growth, the payout has risen in each of the last four quarters. Shareholders now earn $5.12 per share in cash annually, a cash return of about 2.6% at current prices. Such successes have helped Innovative Industrial stock rise by 190% over the last 12 months. 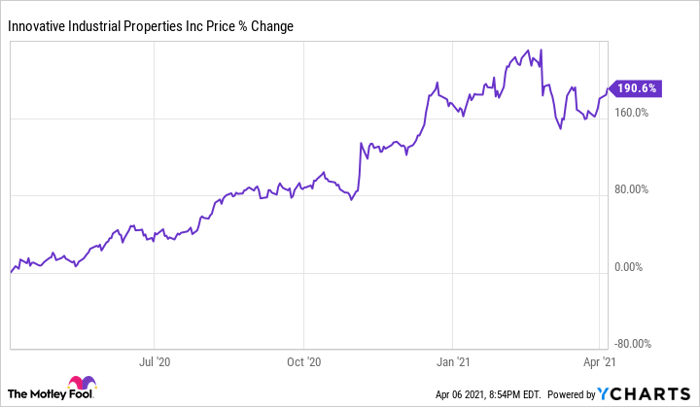 Between this increase and the rising earnings and dividends, its P/E ratio now stands at about 60. Though that has doubled in the past year, that valuation will probably not deter investors considering the triple-digit earnings increases.

Nonetheless, the one thing that could bring uncertainty to this company is, ironically, legalization. If producers can obtain bank loans, they have one less reason to sell their property to Innovative Industrial. Still, the REIT can purchase property outside of leaseback agreements. Moreover, with full occupancy and the industry poised to continue its rapid expansion, the company should continue to prosper.

10 stocks we like better than BJ’s Wholesale Club Holdings, Inc.
When investing geniuses David and Tom Gardner have a stock tip, it can pay to listen. After all, the newsletter they have run for over a decade, Fintech Zoom Stock Advisor, has tripled the market.*

David and Tom just revealed what they believe are the ten best stocks for investors to buy right now… and BJ’s Wholesale Club Holdings, Inc. wasn’t one of them! That’s right — they think these 10 stocks are even better buys.