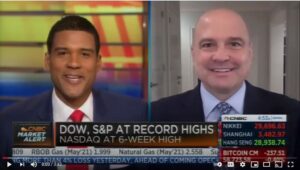 The long-awaited move into traditional value stocks is well underway, but that doesn’t mean that technology stocks are dead. In my conversation with CNBC’s Frank Holland, I outline reasons why big tech should not be overlooked, and why rising interest rates may not affect market leaders like Oracle, Microsoft, Google, and Facebook. Click Here to watch the full video.

The massive, historic stock market rally has continued virtually unabated since the Election which also coincided with the announcement of the vaccine rollouts. Those events, along with The Federal Reserve Banks relentless approach to easy monetary policy, has fueled a massive rise in stocks. What is more important, however, is what should investors do now?

The first thing an investor should do is keep the emotion out of the decision. I know it’s tough to do, especially for near-retirees and retirees who worked the majority of their lives to save a retirement nest egg. With stocks at all-time highs, and stock market valuations at lofty levels, the concern is legitimate. But it’s also important to pause and examine some relevant data points.

For starters, JPMorgan often notes that bull markets usually end due to one of three factors – and none of these three are currently present:

While valuations are high, they are not excessive. With the economy growing anywhere from 6% to 9% this year, earnings are likely to rebound. And, considering interest rates are still relatively low, stock valuations can be justified, especially against expected future earnings.

Yes, lumber and building related commodities are at all-time highs, but the big kahuna, oil, is not. Yes, we shut down the keystone pipeline and drilling on federal lands, but the world is producing a lot of oil. And, with South America and Europe only having modest recoveries, their demand is down. As long as oil remains tame, a growing economy can handle an increase in select commodities. To be sure, a massive stimulus bill and prolonged super-low interest rates could fuel more demand for industrial and residential building – and that will be something to watch for. But keep in mind, as interest rates tick up, home affordability naturally declines and creates its own natural headwind. For this reason, we don’t see a perpetual rise in material costs.

It is hard to imagine this Federal Reserve Bank (‘The Fed’) tightening monetary policy to reign in economic growth. Not when the ‘real’ unemployment rate is close to 10%, and Fed Chair Jerome Powell has repeatedly said he has his eyes on getting to near full employment. This doveish tone should keep interest rate increases rangebound (albeit slightly higher), and in that environment, stocks will be the only game in town for investors. Should he change his tone, stocks may face at least some interim pressure.

In addition to The Fed being the great enabler showing no interest in tightening despite growth returning, Congress is spending like drunken sailors (and as Senator John McCain would often say “I mean no disrespect to drunken sailors”). The Fed had urged for Congressional action so fiscal policy could complement The Fed’s expansionary monetary policy. Congress has more than granted Mr. Powell his wish, and they are forming a dynamic duo bringing massive amounts of liquidity to the economy. The result is interest rates that are still relatively low, easy money, support for state and local governments, and cash in the pockets of millions of Americans (not to mention museums, non-profit organizations, and classrooms). What else could we want? How about a massive infrastructure spending bill? No worries, it looks like that will happen too.

Many of you reading this will ask “isn’t that spending money we don’t have?” Or, “could that be inflationary?” Or, “could all this spending weaken our currency causing foreign governments to stop buying our debt thereby raising interest rates which would be a major headwind for the economy and the stock market?” To those questions I say “for now, at least, enjoy the fun.” Everyone who has left the party early has missed out on a great run.

To be sure, if you are a near retiree or retiree who is concerned, let’s re-evaluate your risk. But please note that if we built your portfolio together, we would have already built it with your life situation in mind. Therefore, reductions to a stock allocation should be done very carefully (as most recent attempts at timing this bull market have proven).

Of course, investing is never a certain proposition, and valuations are high. And, there is always the prospect of another black swan event or a resurgence of Covid. But even after considering these risks and others, I believe the scales are tilted toward the powerful forces of The Fed, Congress, and a rapidly reopening economy with consumers bursting to go out and play.

Mark Avallone is the author of Countdown To Financial Freedom, and founder and President of Potomac Wealth Advisors, LLC a financial advisory firm serving clients through holistic financial planning and wealth management. Avallone writes on a variety of financial topics, and his contributions have appeared in the Wall Street Journal as well as in Fintech Zoom where he is a regular contributor. He has appeared on CNBC and has been a repeat guest on the Fox Business Network. His insights have also appeared in USA Today, U.S. News & World Report, The Washington Post, and other leading publications.

Mark Avallone is a registered representative and an investment advisor representative of H. Beck, Inc., which is unaffiliated with Potomac Wealth Advisors, LLC.