As my colleague Fiona Cincotta noted at the end of last year, the “Big 5” US technology stocks (Facebook (NASDAQ:), Apple (NASDAQ:), Amazon (NASDAQ:), Microsoft (NASDAQ:), and Google (NASDAQ:) now represent a full quarter of the ’s market capitalization. These firms were among the biggest winners of global lockdown measures and the accelerated adoption of digital commerce over the last year, but now the question is, “With the US and other developed nations on track for a ‘return to normal’ in the coming months, will the US tech behemoths give back last year’s gains?”

While we’re not quite there yet, the biggest unknown for this quarter’s tech earnings reports will be around how much of the pandemic-driven changes in consumer preferences will ultimately prove to be permanent. A number of high-profile companies have indicated that they anticipate having employees return to a traditional worksite rather than continuing to work from home, though many (including even stodgy old automakers like Ford (NYSE:)) have suggested that some staff will continue to work from home for at least a portion of their workweeks. In this month’s reports, traders will monitor closely to see how tech executives characterize this trend and issue guidance for adoption of their technology-enabled products in the coming quarters.

Regulatory risks on the rise?

Another key question in the wake of November’s “blue wave” election concerns the extent to which President Biden and the Democratically-controlled Congress will seek to regulate these behemoths. So far, regulators have continued to pursue anti-trust actions against Apple and Google, but we haven’t seen a landmark new case brought yet, something that many analysts expect in the coming years.

On a separate but related note, President Biden’s proposed tax increases (if ultimately passed in a form similar to the initial proposal) could be particularly damaging for technology companies, which have become adept at minimizing taxes through foreign entities in recent years.

Keeping these high-level themes in mind, we take a quick technical look at each of the five FAAMG stocks below:

Alphabet, best known as Google’s parent company has seen the second-best stock performance of the bunch over the past year, rising more than 80% in a consistent uptrend. From a technical perspective, there’s little to suggest that the trend is likely to come to an end any time soon, though the overbought RSI indicator and potential RSI divergence could hint at a short-term pullback or pause if earnings are unable to meet their lofty expectations:

Microsoft has been a relative laggard among these massive firms, rising “just” a bit under 50% over the last year. The company’s Teams video chat platform, as well as its Azure cloud product, have become synonymous with the global WFH movement, so any insights on that front will be relevant. Technically speaking, the stock has burst out of a sideways range in the low- to mid-$200s over the past two weeks to hit new record highs, so the path of least resistance remains to the topside as long as prices can hold above previous-resistance-turned-support in the $245 area: 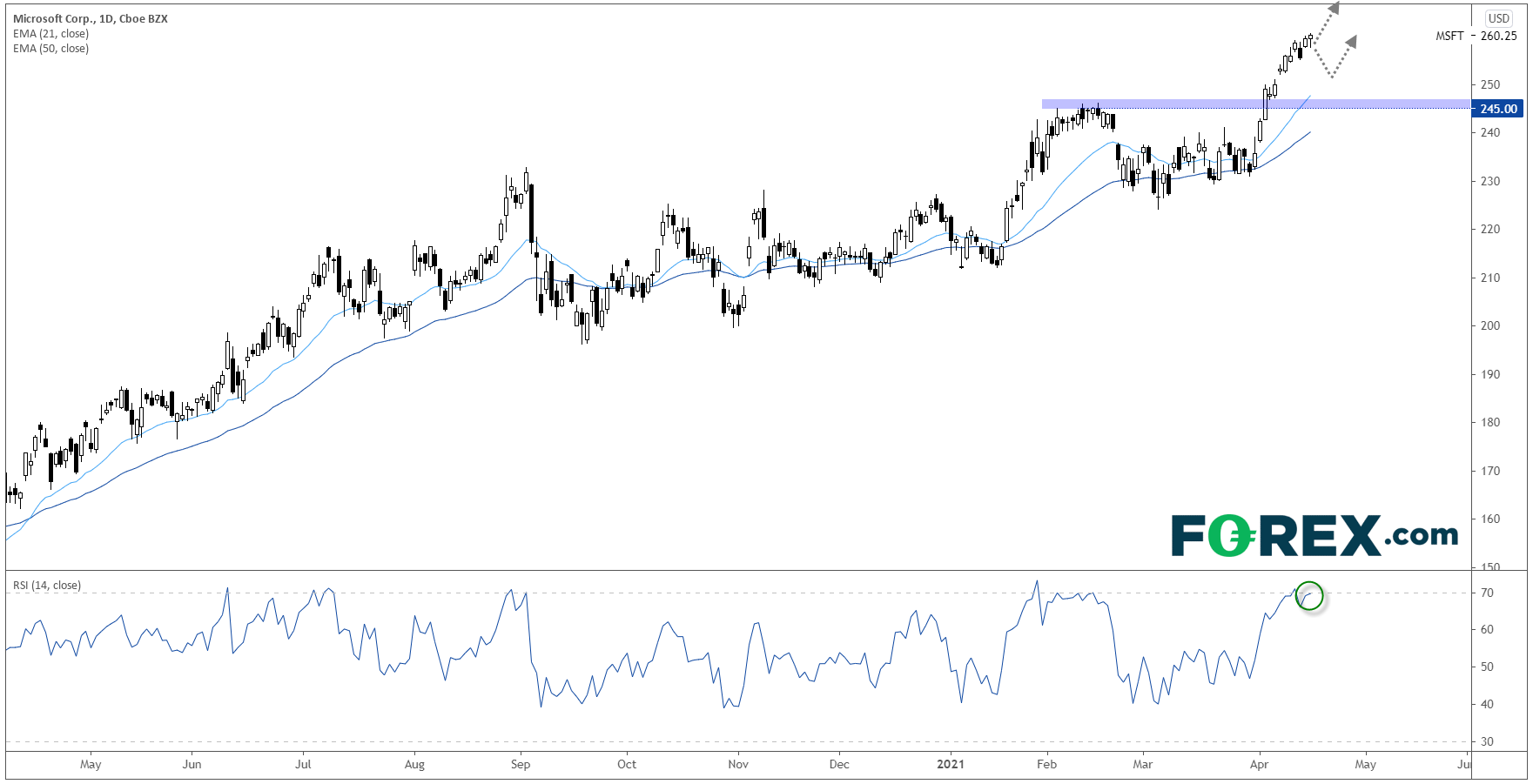 Apple has been the standout performer of the bunch, rising by more than 85% over the last year on robust demand for its consumer electronics and associated services, though as the chart below shows, that momentum has flagged a bit of late. The stock is currently trading near the middle of the year’s range, with the near-term momentum flipping in favor of the bulls so far in April.

This setup makes the target levels relatively clear: a strong earnings report with optimistic guidance could be the catalyst to drive AAPL toward it’s record high near $145, whereas an earnings “miss” or soft outlook for the rest of the year may take prices back toward the year-to-date low in the $120 zone: 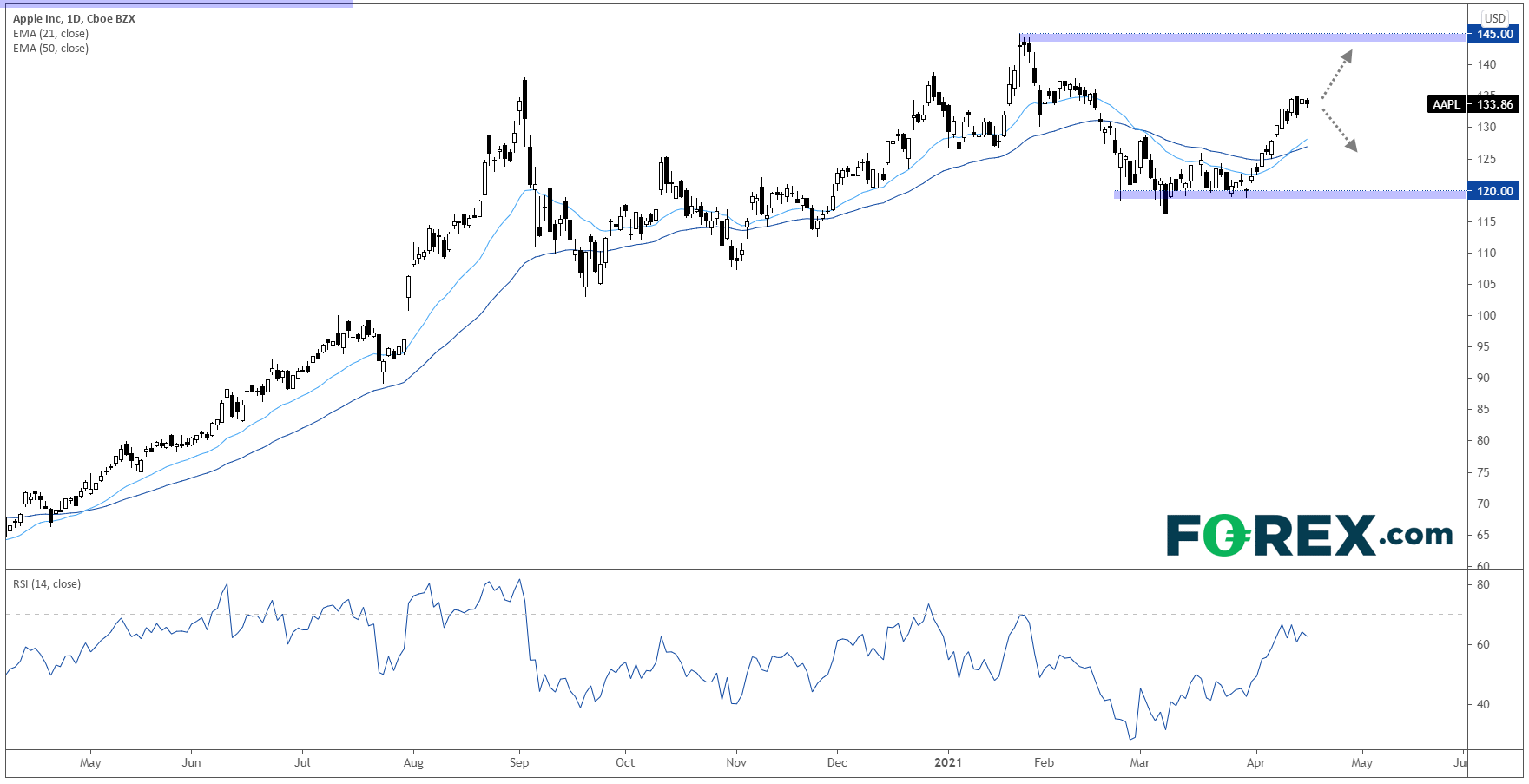 The planet’s biggest social media platform has had stellar stock performance after a lackluster, consolidative stretch in Q4 2020 and Q1 of this year. As the chart below shows, prices recently broke above the previous all-time high around $300, potentially clearing the way for more strength heading into the middle of the year if the coming earnings report beats expectations. A break back below $300 would turn the technical outlook back to neutral, where it spent the majority of the last year. 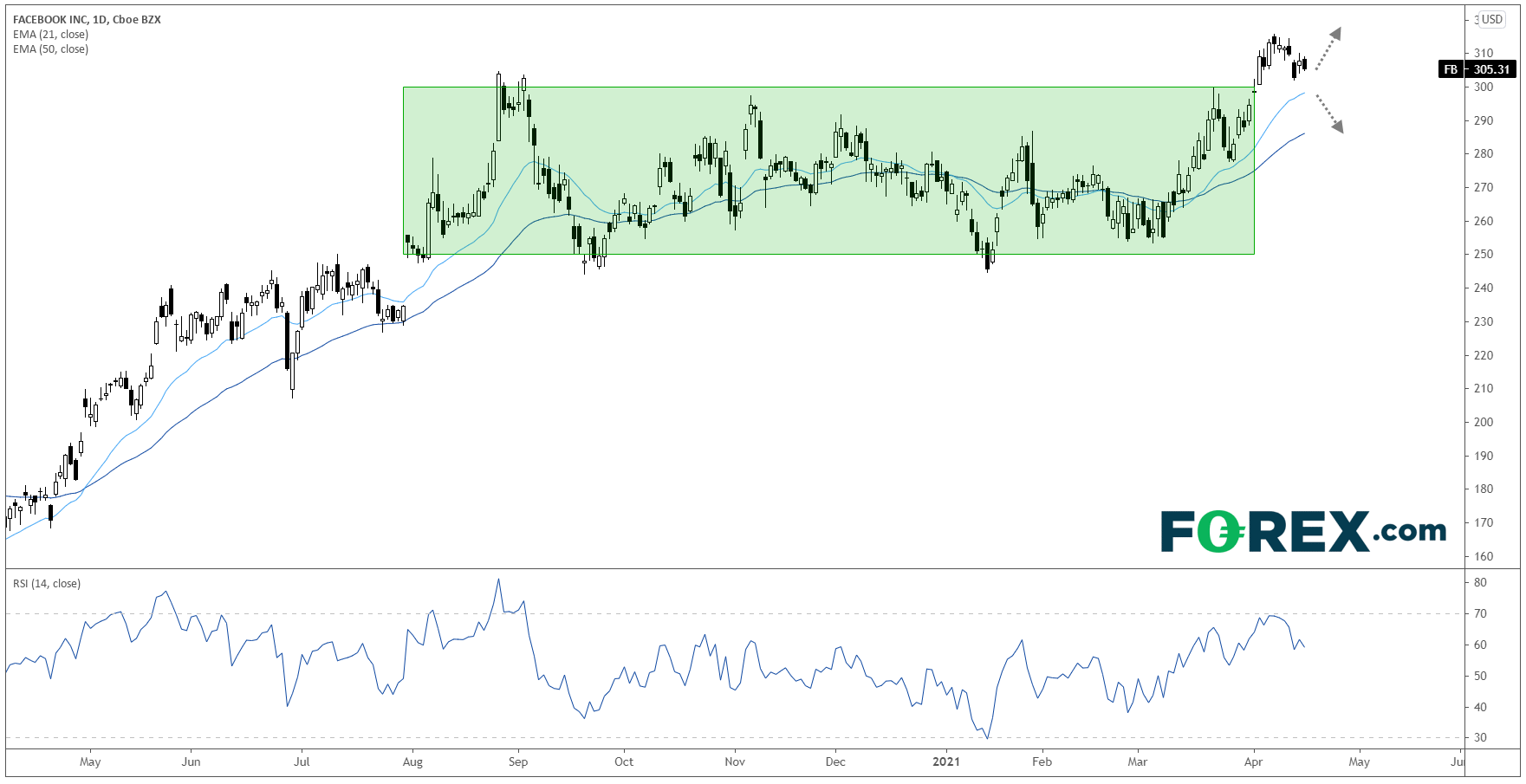 Despite (or perhaps because of) its massive scale, Amazon has been the laggard of these five technology leaders, rising “just” about 40% over the last year. The company has struggled to build out its delivery capacity, plan for a new CEO, and deal with labor issues over this period, so it’s not surprising to see the stock still mired in the same $3,000-$3,500 range that has contained prices since last July. Though the company’s massive retail operation is the most prominent arm in the public’s eye, profits at the fast-growing Amazon Web Services (AWS) division will be the most important aspect for traders to watch. A post-earnings break above $3500 could pave the way for continued gains, whereas a miss could leave the stock treading water for another couple months. 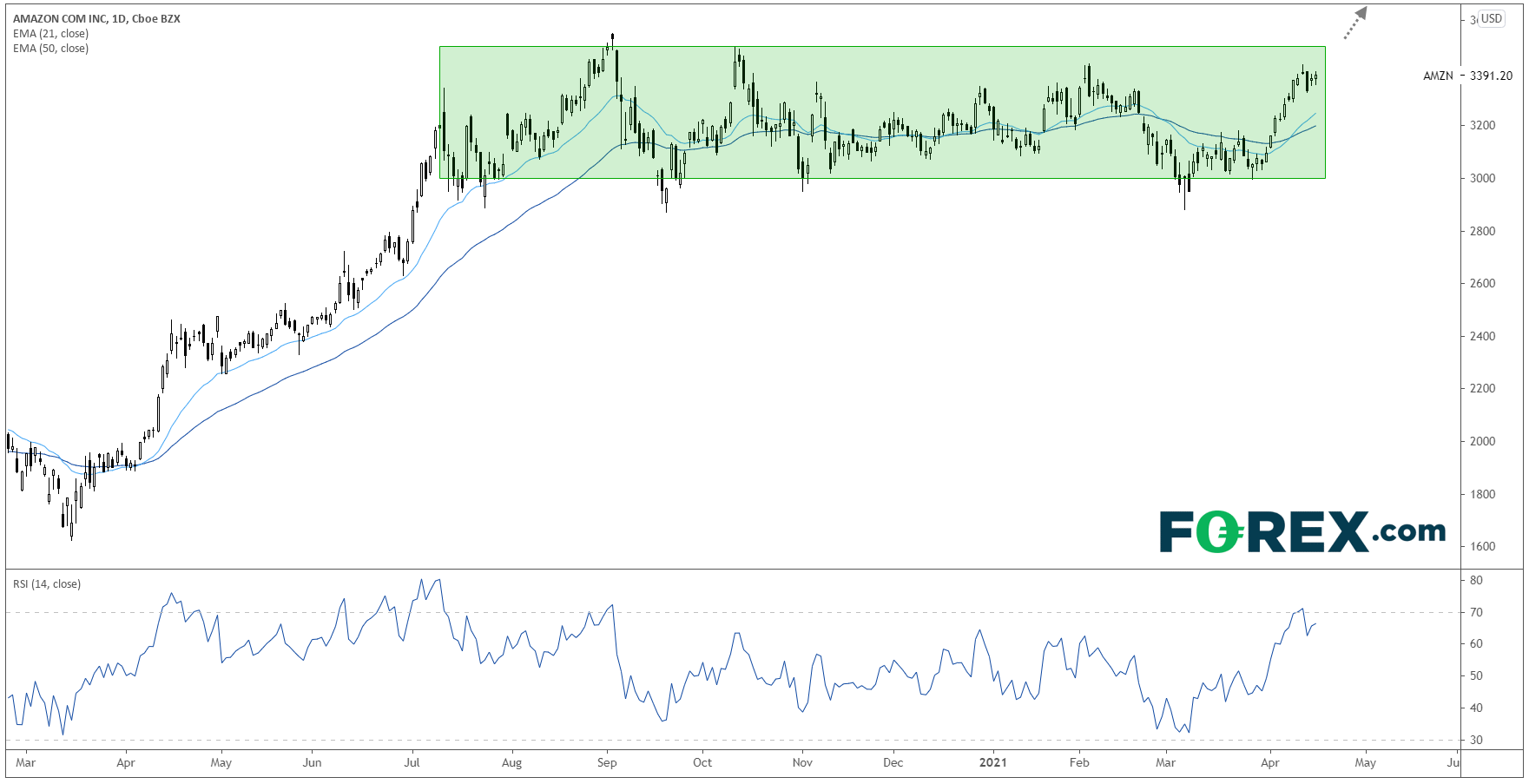 Netflix Stock – To Invest During a Market Crash, Start With This Stock

Uber Stock – DoorDash Is Down 50%, and It Might Get Worse