Shares of Netflix (NASDAQ:NFLX) continue to consolidate following earnings that both exceeded and disappointed. NFLX remains mired in a trading range bounded to the upside by $550 and the downside by $500. Look for this consolidation to continue, with Netflix making a move back towards the middle at $525.

Netflix reported earnings last Tuesday that were a decidedly mixed bag. Earnings were a big beat, coming in at $3.75 per share versus consensus of just $2.97. Revenue of $7.16 billion was also above expectations of $7.13 billion. The company authorized a buyback program for $5 billion in common stock.

Subscriber growth, however, was much weaker than projected. Analysts had forecast over 6 million new net subscribers. Just under 4 million were added. However, it’s important to remember that Q1 of 2020 saw record subscriber growth of 15.8 million.

The company said they believe paid membership growth slowed due to the big Covid-19 pull forward in 2020. Some of the slower growth could be attributed to a lighter content slate in the first half of this year, due to Covid-19 production delays.

Shares of Netflix are starting to look better from a technical perspective. The MACD is firming after reaching extremely oversold readings following earnings. The 9-day RSI has turned higher after getting to levels that signaled lows in the past. 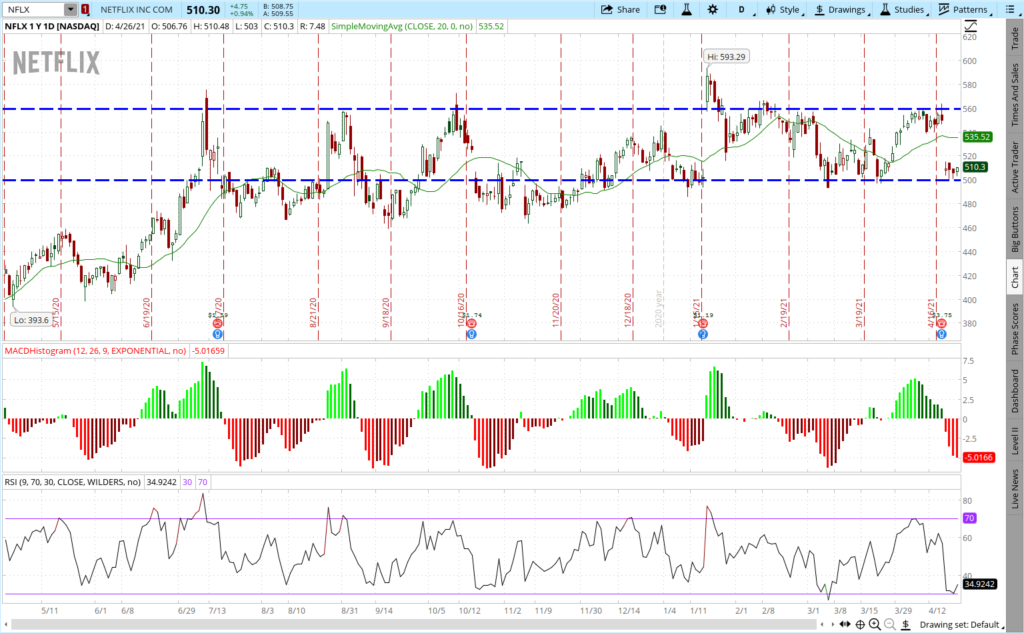 In fact, NFLX stock is trading at a deep discount to the 20-day moving average. The previous times that it was at similar discounts marked significant short-term bottoms in the stock.

More importantly, NFLX stock once again held the critical $500 support area. That is the fourth time that this level held since the beginning of the year. The inability for the sellers to take Netflix below $500 with any conviction bodes well for a short-term rally for Netflix.

I talked about Netflix stock just prior to the earnings release on my Morning Trade Live segment with TD Ameritrade. The stock was trading at the $555 area at the time and I looked for Netflix to re-test support near the $500 area. I recommended a bearish put calendar spread trade which profited from the post-earnings pullback.

Now that NFLX stock has indeed dropped back down near $500, my previous somewhat bearish outlook has tempered because price does matter. I expect NFLX to move back toward the 20-day moving average of $535 over the coming weeks. This would also mark a return to the middle of the well defined long-term trading range between $500 and $550.

InvestorPlace Senior Investment Analyst Luke Lango discussed his bullish thesis in a recent deep drill down on Netflix. He argued that while earnings might be a mixed bag, NFLX stock should still rally. His short-term price objective of $600 sits just below the average analyst consensus of $620.

Implied volatility in Netflix options is the lowest it has been over the past year. The current IV percentile is at 1%, meaning option prices are extremely inexpensive on a comparative basis. This favors long option strategies when constructing trades.

So to take advantage of a potential pop in an oversold NFLX stock, a short-term bull call spread makes probabilistic sense.

The maximum risk is $200 per spread. Meanwhile, the maximum potential gain is $300 per spread. Possible return on risk is 150% if NFLX stock closes above $525 at June expiration. This equates to a just a 3% move higher from the $510.30 closing price for Netflix.

I would use a meaningful break of major support at $500 as a stop-out level for the trade.

On the date of publication, Tim Biggam did not have (either directly or indirectly) any positions in the securities mentioned in this article.

Anyone interested in finding out more about option-based strategies or for a weekly option and volatility newsletter can visit the Options and Volatility Newsletter website.