Nikola ended the week on a positive note even though the gains were marginal. Trading at $17.55 with a modest 4.4% increase, Nikola stock received a new breath of fresh air after the Department of Energy (DOE) stated that it would be launching an Energy Earthshots Initiative in accelerating breakthroughs of more abundant, affordable, and reliable clean energy solutions within the decade.

According to the government agency, it would be focusing its efforts first with Hydrogen Shot (an area Nikola is famous for) to reduce the cost of clean hydrogen by 80% to $1 per kilogram in a decade. Per a Financial Times report, the Biden Administration said it would be imposing tariffs on imported rare earth magnets from Asian giants.

Providing further details, the White House said that it would initiate an investigation to see if the rare earth imports would pose a national security risk. This way, it hopes to revitalize the domestic rare earth magnet producing industry and encourage the nascent space’s growth.

Nikola would be affected by the imposition of levies on its rare earth imports given that it utilizes these materials in the production of long-haul hydrogen-powered EV trucks, but apparently, the reports have not impacted Nikola stock negatively in the short term.

No manufacturer fancies a white house inquiry into material imports, but this is unusual. This is because the Biden Administration is looking to pump in funds. The initiative, which is part of a 10-year plan to create a domestic supply chain for lithium batteries, will receive government aid of over $17 billion in lending facilities to support the initiative.

Even though the news would normally generate a negative reaction, Nikola stock price surged following the added incentive behind the government order.

The Charts Tells The Tale

Moving on the trading charts as at the moment of writing, the gains NKLA has seen has not had any significant effect on its price action. Nikola has been embroiled in legal action and reportedly spent $14.5 million as legal expenses in the runup to 2021. The EV firm, which is currently under investigation by the Securities and Exchange Commission (SEC) and the Department of Justice (DoJ) for alleged fraud, once saw negative digits slumping to a near-low of $16.50. 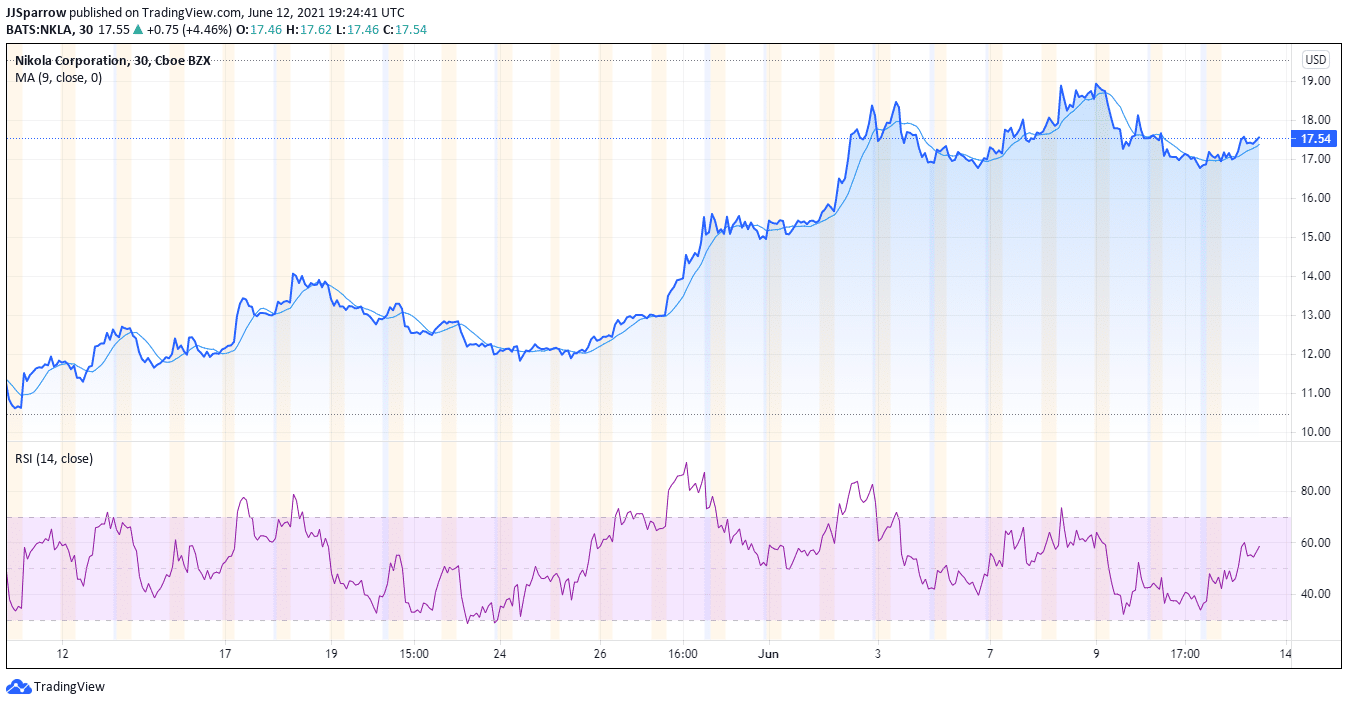 But things may be changing, in the short term at least, with the 20-day moving average (MA) support pointing towards a bullish trend. The 14-day momentum oscillator – relative strength index (RSI) is showing healthy numbers at 62.94. This means NKLA is receiving the needed investor attention and may enter the overbought zone at 70.

Moving on to the Commodity Channel Index (CCI) on the 20-day chart – a technical indicator that shows the current price level relative to the average price level over some time – shows 73.51. This indicates that the price is above the intermediate historical level.

The moving average convergence and divergence (MACD) 12-day exponential moving averages (EMAs) show that both indicators are on parallel, meaning the faster and slower trend lines intersect. This indicates that NKLA stock may see an uptrend in the coming weeks. Directional movement index (DMI) tells a trader in which direction the price of an asset is moving. The indicator accomplishes this feat by comparing previous highs and lows and charting two positive and the other negative ones.

At the close of trade, the 14-day DMI for NKLA stock showed an upward pressure which means a positive DMI was at play. The negative DMI surged as well, but the bulls won the day. Relative to its short-term gains, NKLA stock has not performed well relative to the 200-day MA. Falling below the indicator, NKLA shows a bear market at play.