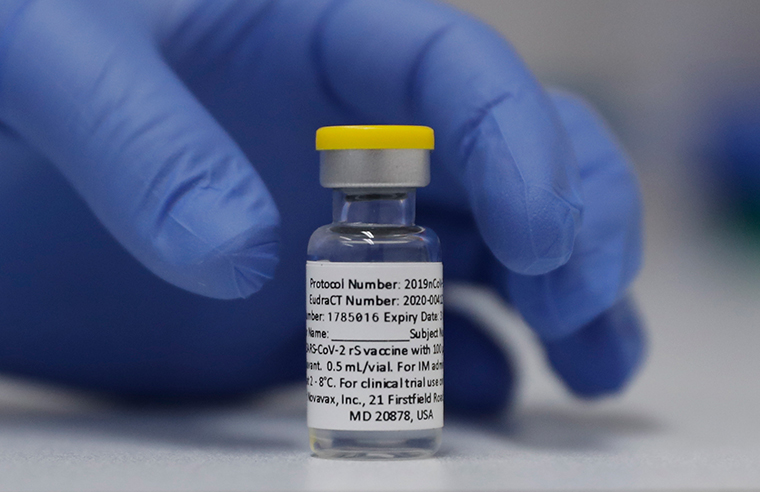 A vial of the Phase 3 Novavax coronavirus vaccine is seen ready for use in the trial at St. George’s University hospital in London Wednesday, October 7, 2020.  Alastair Grant/AP/FILE

A trial in South Africa of an experimental coronavirus vaccine made by US vaccine maker Novavax shows the vaccine is about 50% effective against a variant that’s now the dominant strain in that country. It also shows that the vaccine offers better protection from the new variant than antibodies from people previously infected with coronavirus.

The researchers say their findings, which had been shared previously in a statement from Novavax, show the importance of quick and widespread vaccination to prevent the worse spread of variants.

The team led by Tulio de Oliveira of the University of KwaZulu-Natal was conducting a mid-size, Phase 2 safety and efficacy trial of the vaccine in about 4,000 volunteers in South Africa when the B.1.351 variant was by far the most common circulating type of virus.

“The NVX-CoV2373 vaccine was efficacious in preventing Covid-19, which was predominantly mild to moderate and due to the B.1.351 variant, while evidence of prior infection with the presumptive original SARS-CoV-2 did not confer protection against probable B.1.351 disease,” they wrote in a preprint report. That report hasn’t been peer reviewed but it has been posted online.

“Among 94% of participants without HIV, vaccine efficacy was 60.1%. The study was not powered to detect efficacy in the small population of people living with HIV,” they wrote. Overall efficacy in preventing symptomatic infection was about 50%.

About 30% of the volunteers had evidence of a previous coronavirus infection when they enrolled. When these volunteers got placebo shots, they were just as likely to catch coronavirus as those who got real vaccine, the researchers reported. That’s evidence that previous infection with a different variant provides little protection against B.1.351.

“This finding has significant public health implications for pandemic modeling, control strategies, and vaccine development and deployment efforts,” the team wrote in the preprint posted Wednesday.

But the vaccine did provide protection against the new variant – although much lower than the 89% efficacy shown in a more advanced, Phase 3 trial in the UK.

Novavax plans to apply for US Food and Drug Administration emergency use authorization of its Covid-19 vaccine sometime in the second quarter of this year. It’s testing 30,000 volunteers in the US and Mexico for that application.

The company has said it is already working on booster shots to help its vaccine protect against newly emerging variants of the coronavirus.

Arizona Gov. Doug Ducey has issued an executive order that requires schools to offer in-person learning by March 15, according to a statement from the governor’s office.

“More than half of Arizona’s schools are open and offering in-person options,” Ducey said in his statement. “More schools need to follow their lead and pave the way for equitable education options for every Arizona student.”

Ducey emphasized that the CDC and “numerous health officials have said time and time again that schools are safe and kids can go back to the classroom.”

The order mandates that schools return to in-person learning by March 15, or after Spring Break, according to the governor’s statement.

The statement says a parent or guardian may choose to continue virtual learning for their child.

The order makes an exception for middle and high schools located in counties with “high” transmission of Covid-19, as defined by the CDC. The statement noted that this currently includes three Arizona counties: Coconino, Yavapai, and Pinal.

“The CDC is clear that there is a safe pathway for all schools to open at any transmission level, and to stay open if they implement proper mitigation strategies,” the governor noted.

This announcement comes a day after nearby Texas Gov. Greg Abbott announced he would be lifting the mask mandate and “opening Texas 100 percent.”

The Texas Department of State Health Services said Wednesday that school and childcare workers would now be eligible to receive the Covid-19 vaccine, following a directive from the US Department of Health and Human Services.

“Last night, DSHS received a letter from the U.S. Department of Health and Human Services directing states to expand eligibility to include people who work in school and child care operations. The federal directive defined the people eligible as ‘those who work in pre-primary, primary, and secondary schools, as well as Head Start and Early Head Start programs (including teachers, staff, and bus drivers) and those who work as or for licensed child care providers, including center-based and family care providers,'” Texas Department of State Health Services Said in a statement.

“Providers are encouraged to continue their efforts to vaccinate older adults since the burden of COVID-19 falls most severely on people age 65 and older,” the Texas statement continued.

Go There: Fintech Zoom answers viewers’ questions about the rollback of Covid-19 restrictions in Texas

Texas Gov. Greg Abbott announced he is lifting the state’s mask mandate and allowing businesses to open at 100% capacity beginning on March 10, despite health officials’ warnings.

Indiana expands Covid-19 vaccine eligibility to those 50 and older 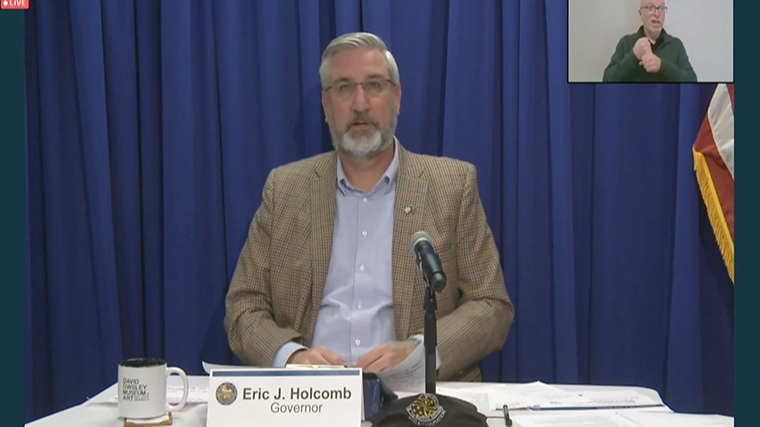 The governor said the state will continue to drop vaccine eligibility based on age, ultimately to age 40.

Holcomb also announced that he would be receiving the vaccine on Friday, as he has now become eligible. He said he received a strong recommendation from Indiana State Health Commissioner Dr. Kristina Box “to walk the walk and not just talk the talk.” 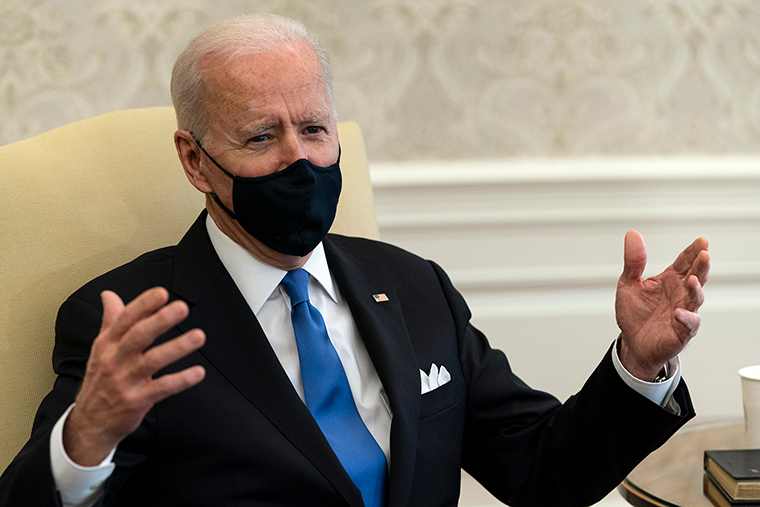 President Joe Biden sharply criticized states lifting Covid-19 restrictions against the pleas from the US Centers for Disease Control and Prevention and other top public health officials, accusing those in power of “Neanderthal thinking.”

“I think it’s a big mistake. Look. I hope everybody’s realized by now, these masks make a difference. We are on the cusp of being able to fundamentally change the nature of this disease because of the way in which we’re able to get vaccines in people’s arms,” Biden said when asked about Gov. Greg Abbott and Gov. Tate Reeves’ decisions to relax restrictions in Texas and Mississippi.

“The last thing – the last thing we need is Neanderthal thinking that in the meantime, everything’s fine, take off your mask, forget it. It still matters,” he added.

He referenced a card he keeps in his pocket with the daily death toll of the virus amid his administration’s push to get vaccines into arms.

Biden, who is meeting with a bipartisan group of lawmakers in the Oval Office on the subject of ending cancer, called on all Americans to continue to follow guidelines despite the mixed messaging from some state officials.

“It’s critical – critical, critical, critical – that they follow the science: Wash your hands, hot water, do it frequently. Wear a mask and stay socially distanced. And I know you all know that. I wish the heck some of our elected officials knew it,” he told reporters.

India’s Covaxin vaccine is 81% effective against coronavirus, according to early data released Wednesday by Bharat Biotech, the company that developed the drug jointly with the government-run Indian Council of Medical Research (ICMR).

Data indicates the vaccine can also effectively combat the coronavirus variant first spotted in the UK, according to an analysis by the National Institute of Virology, Bharat said in a news release.

“Today is an important milestone in vaccine discovery, for science and our fight against coronavirus…Covaxin demonstrates high clinical efficacy trend against COVID-19 but also significant immunogenicity against the rapidly emerging variants,” said Dr. Krishna Ella, the company’s chairman and managing director.

Covaxin is a two-dose vaccine. It is the first Covid-19 vaccine that has been developed in its entirety in India. In March 2020, following the successful isolation of the novel coronavirus virus, the ICMR established a public-private partnership with Bharat Biotech to develop the virus isolate into a vaccine candidate.

Over 40 countries have expressed their interest in Covaxin, including Mongolia, Myanmar, Sri Lanka, the Philippines, Bahrain, Oman, Maldives and Mauritius.

More than 2,500 reported cases of concerning variants in the US, CDC says

At least 2,581 cases of coronavirus variants first spotted in the UK, South Africa and Brazil have been reported in the United States, according to data updated Tuesday by the US Centers for Disease Control and Prevention.

The vast majority of these cases, 2,506, are the more contagious variant known as B.1.1.7, which was originally detected in the UK. This variant has been found in 44 states, Puerto Rico and Washington, DC. About a quarter of these were found were in Florida.

In addition, 65 cases have been reported of a variant initially seen in South Africa, called B.1.351, in 16 states and Washington, DC.

Lastly, 10 cases of the P.1 variant first linked to Brazil have been discovered among five states.

CDC says this does not represent the total number of such cases circulating in the US, but rather just those that have been found by analyzing positive samples. The agency cautions that its numbers may not immediately match those of state and local health departments. 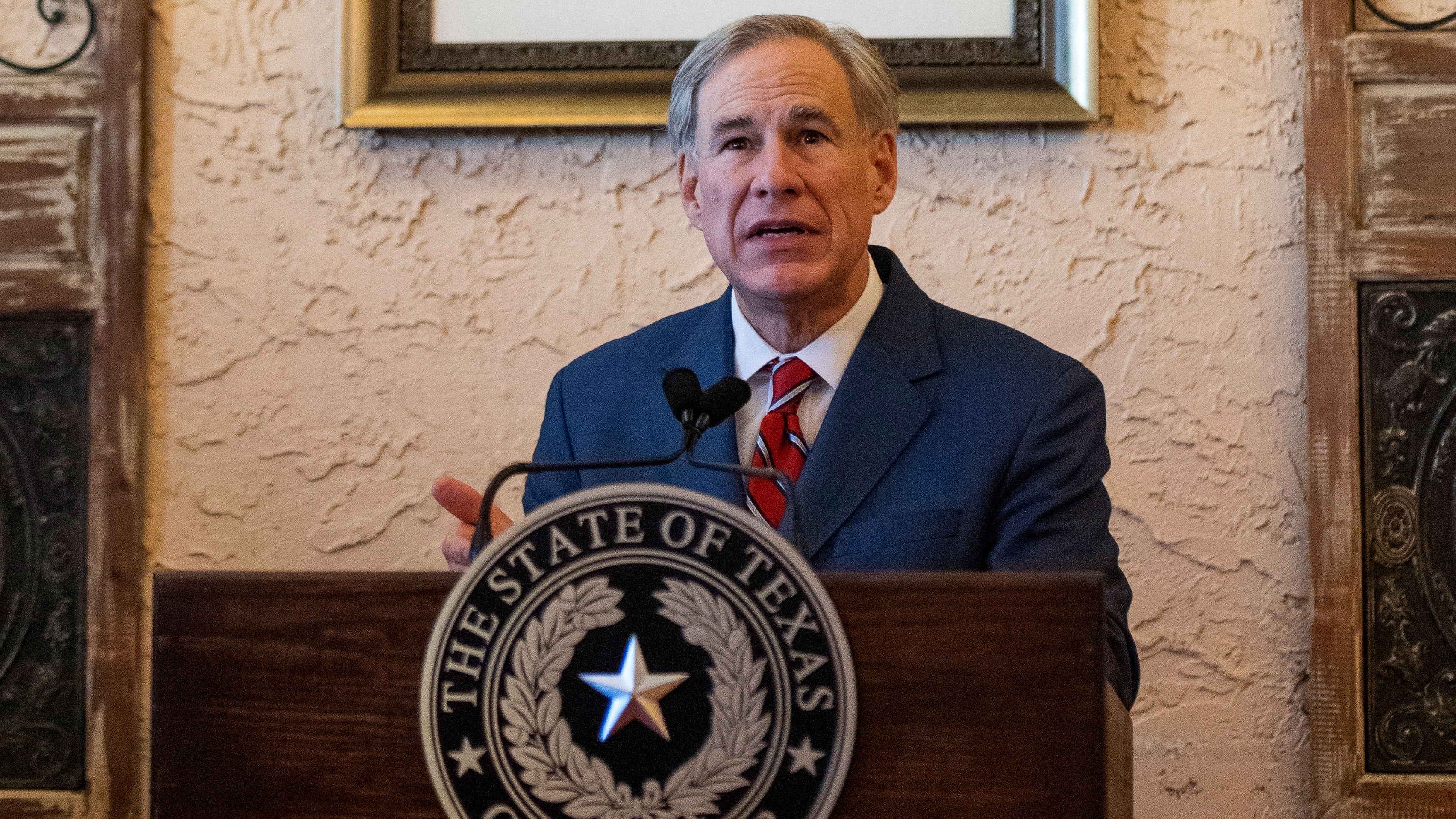 The day after Texas Gov. Greg Abbott announced he would be lifting the mask mandate and “opening Texas 100%,” the leadership of Austin has strong words of opposition to the move.

Austin Mayor Steve Adler said that the move is a breaking of a promise and an attempt to deflect from other issues the governor is facing.

“Governor Abbott said he’d be guided by the science and the data and yesterday he broke that promise,” Adler said today at a news conference this morning.

“There is no explanation for the governor’s action other than trying to distract us and the media from the failure of the state to protect us from the power outage,” Adler added.

Travis County Judge Andy Brown noted that “with just over 5% of our community vaccinated, this is no time to be lifting the mask ordinance.”

Brown said that county and city leaders will “do everything possible to still require masks in any way possible under that order, and under the law.”

Abbott, however, suggested that business leaders were behind the move by releasing three statements of praise from state business associations in a news release this morning.

“The Governor is striking the right balance by removing the heavy hand of government and allowing businesses to operate as they see fit,” Glenn Hamer, CEO of the Texas Association of Business, wrote in his statement.

“As other states in the country keep restrictions in place, Texas will spearhead the economic recovery,” Invest Texas Council Chairman Ron Simmons said in the release.

SME Stock – Westpac pledges to back SMEs in COVID recovery

ACB Stock - Traders shouldn’t Staggering on this- Aurora Cannabis Inc. (NYSE:ACB) with the stream of -4.08%

DKNG Stock - AL West picks 2021: How the public is betting the division during Spring Training