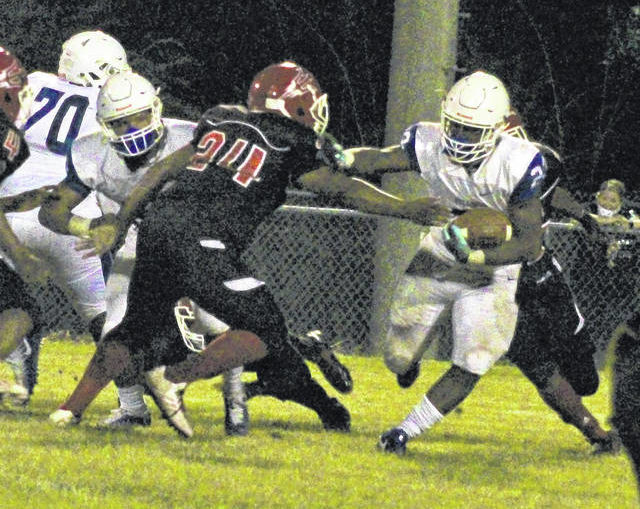 It might have still been pounding a few moments after the game’s conclusion for a different reason, as he ran to try and avoid a Gatorade bath.

St. Pauls dealt Red Springs its first loss of the season with a 42-25 win, claiming the Three Rivers Conference championship for the team’s first conference title since 2008.

“The really good thing I can say about that was it lived up to the hype, and I felt like the Red Springs coaching staff did a great job coaching,” Setzer said. “I thought there was times in the game they were outcoaching us, but I was really glad to see our coaching staff, everybody buckle down, our kids buckle down. But man, they left it on the field tonight, and when you have a game like that you hate there’s got to be a loser.”

St. Pauls (5-0, 5-0 TRC) led 28-25 entering the fourth after three lead changes over the first three quarters, and sealed the victory with two fourth-quarter touchdowns. The first came with 8:41 to go on a 12-yard Jamarcus Simmons run, set up by 61 rushing yards by KeMarion Baldwin previously in the drive, to give the Bulldogs a 35-25 lead.

“I was just playing, the coach was telling us to get back and watch the tight end,” Powell said. “We were working on it all week, and we just had to stay where we was at and watch it. We were ready for it.”

Baldwin finished with 24 carries for 176 yards and a 52-yard touchdown. Waltay Jackson caught two touchdown passes totaling 114 yards, and Will Ford had five catches for 122 yards with a touchdown.

“We talk about big time players playing up in big time games, and I was just so happy for them,” Setzer said. “I saw a concerted effort tonight, and I think we played more of a complete game tonight.”

“We came in prepared,” Jackson said. “We wanted to win, we wanted it bad. Coaches prepared us for this day the whole season.”

Chris Bryant caught two touchdown passes totaling 124 yards for Red Springs, as quarterback Colton Locklear threw for 205 yards on five completions. Eddrick James battled through an injury to rush for 84 yards on 10 carries with a touchdown.

“St. Pauls is a tremendous program with a lot of athletes, a lot of numbers, better numbers than we have,” Red Springs coach Lawrence Ches said. “Their ability to two-platoon really helped keep them fresh in the fourth quarter, and that was one thing that really hurt us was our lack of numbers. We don’t two-platoon, and we literally ran out of gas.”

Red Springs led 13-6 with big scoring plays on two of its first three drives — a 53-yard James run and a 65-yard Locklear-to-Bryant pass — sandwiching a 68-yard Mikail Breeden-to-Ford touchdown pass for the Bulldogs. But the Red Devils punted on the remainder of their first-half drives, while St. Pauls scored on two of its next three — a 49-yard Breeden-to-Jackson pass and Baldwin’s 52-yard score — to take a 20-13 halftime lead.

“Their defensive front has two Division-I recruits, and at the high school level that’s probably two more than most high schools have,” Ches said. “Blocking those two really became burdensome, and they brought a lot of pressure off the edge and we had to regroup at halftime.”

Red Springs pulled to a 20-19 deficit on a 59-yard Locklear-to-Bryant pass three minutes into the third quarter, though the extra point was blocked, and took a 25-20 lead on a 2-yard Locklear run, set up by a 48-yard pass to Shawn Putman; the two-point try failed. St. Pauls took the lead for good on their next play from scrimmage on Breeden’s 65-yard pass to Jackson with 6:22 on the third-quarter clock.

After St. Pauls’ two fourth-quarter touchdowns, Red Springs drove as far as the Bulldogs’ 9-yard line, but turned the ball over on downs.

Both teams will advance to the 2A state playoffs with automatic berths after finishing as the top two teams in the TRC.

But before the Bulldogs prepare for their first-round opponent, they’ll celebrate their first conference title since the current Bulldog players were in preschool.

“The last time we had a conference title was in ‘08, and I thank God I was part of that,” Setzer said. “But I tell them all the time, I want to get St. Pauls back to where it was. So it’s really meaningful; it’s been long overdue, but I’m so glad that the game lived up to the hype, and what a very big stepping stone that was for our program moving forward.”

The Fairmont football team lost 43-42 to West Columbus on Friday in the Golden Tornadoes’ season finale.

Fairmont (1-5, 1-5 TRC) trailed 35-12 early in the fourth before mounting a rally that ultimately fell just short.

West Columbus (2-3, 2-3 TRC) earned its first win over Fairmont since 2012. The Vikings will play in the 1A state playoffs next week as the TRC’s 1A representative.