Not too long ago, Bitcoin (CCC:BTC-USD) was hitting new 52-week highs. At its low last weekend, though, the cryptocurrency was down more than 20% from its high. What’s going on and how will Bitcoin trade going forward?

Investors who are asking themselves whether Bitcoin is a safe investment at this point have a valid concern. The difficult thing about cryptocurrencies at this point is that they’re not very stable.

Bitcoin is easily the largest and most well-known crypto play in the world. Ethereum (CCC:ETH-USD) gets some discussion, as does bitcoin cash (CCC:BCH-USD) and some others. However, Bitcoin is the go-to cryptocurrency; it’s the one that people tend to talk about during the holidays.

Even so, this name tends to be volatile. Unlike a stable currency — such as the U.S. dollar — cryptocurrencies tend to have wide trading ranges. For instance, Bitcoin rallied 16.5% from April 8 to its high on April 14, then fell more than 20% to its low on April 18. It trades more like a growth stock than anything else.

Is Bitcoin a Buy? 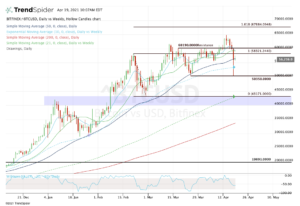 That being said, Bitcoin could drop further before it rallies again.

While Bitcoin ultimately bounced back above its ten-week moving average, it’s struggling to break above the 50-day moving average. We’ll need to see that happen before a more sustainable bullish trend can ensue.

Specifically, a dip down to the $40,000 to $43,000 area can’t be ruled out, along with a drop to the 21-week moving average. If that test comes in the next few days or perhaps weeks, it would likely be an attractive point at which to buy Bitcoin.

On the upside, I would really love to see this name get back above $60,200. That  would put it back above its resistance and above all of its major moving averages. Such a rally would certainly put the all-time high back in play, followed by the 161.8% extension.

However, my immediate focus is the 50-day moving average. So far, Bitcoin has been unable to move above it after it acted as support for so long. If it can’t get above this measure, the 10-week moving average and $50,350 will remain in play.

Breaking Down the Cryptocurrency

Bitcoin seems to have a bit of a hangover from the Coinbase (NASDAQ:COIN) debut. Whether that “sell-the-news” reaction ends up being a major top or a minor setback, we have yet to find out.

All we can do is navigate the current environment to the best of our abilities. It doesn’t help that a number of altcoins have seen a surge in the last few days, with some exploding several hundred percent in about a week.

There are certainly reasons for Bitcoin to go up in the long-term. In fact, there are several reasons why it can climb in the long-term . However, bullish catalysts do not make the cryptocurrency exempt from volatility and corrections in the short-term.

Let’s keep in mind that Bitcoin is up almost 700% in the past 12 months, 400% in the past six months and almost 60% in the past three months. It’s not as if this asset hasn’t had its time in the sun; in fact,  it’s plenty bronzed at this point.

So while companies are gobbling up Bitcoin and as retail investors have flocked to it in the past, let’s keep these massive gains in the back of our mind. It wouldn’t be odd or unhealthy to see a little air come out of the cryptocurrency.

I love that PayPal (NASDAQ:PYPL), Square (NYSE:SQ), Coinbase, Robinhood and others have made it so easy to buy Bitcoin. I love that Tesla (NASDAQ:TSLA), Square, Microstrategy (NASDAQ:MSTR) and others are buying Bitcoin.

Regardless though, the cryptocurrency will go through ebbs and flows,  just like any other asset.

On the date of publication, Bret Kenwell did not have (either directly or indirectly) any positions in any of the securities mentioned in this article.